By Emma Dunkley For The Daily Mail

Embattled cruise line Carnival has been hit by a shareholder revolt over its boss’s £11.4m pay packet.

In an embarrassment for the FTSE 250 firm, 36 per cent voted against its pay report.

It will now join the executive pay ‘list of shame’, overseen by the Investment Association trade body. Firms are named if at least 20 per cent of shareholders oppose bosses’ earnings.

Sailing into a storm: Carnival gave chief executive Arnold Donald a potential package of more than £11.4m – including a £4.6m bonus

Carnival gave chief executive Arnold Donald, 68, a potential package of more than £11.4m – including a £4.6m bonus, despite its use of the taxpayer-funded furlough scheme, not paying dividends and pushing through redundancies during the pandemic.

Institutional Shareholder Services, an adviser to pension funds, said it had ‘material concerns’ about his package, adding: ‘The annual bonus appears to have been entirely discretionary, paid out at maximum despite poor shareholder returns, and 2021 equity grants to executives lacked performance criteria.’

One of the biggest shareholders, Legal & General Investment Management, with £1.4trillion in assets, voted against the pay policy.

It also criticised Carnival for removing links between pay and financial performance. The cruise giant said Covid meant it was not possible to set financial targets, claiming it was ‘impractical to develop financial operating performance goals’ in connection with the annual bonus. 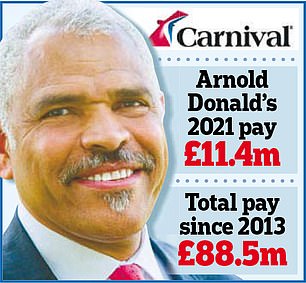 Carnival felt the heat when cruises were stopped in 2020 at the start of the pandemic, and 3,500 passengers were trapped on its Grand Princess liner due to an outbreak.

The firm said its ‘required filings… do not represent what our CEO received in any given year since we operate in a pay-for-performance model where most of his CEO pay is at risk’.

It said in the results for its annual meeting that ‘the board of directors are committed to open and transparent dialogue with shareholders and will continue to engage with them, in particular to understand the views and concerns of those shareholders who voted against these resolutions’.