Carlos Alcaraz sent social media into a tailspin Wednesday night when he produced one of the best shots of all-time during his US Open quarterfinal.

The young Spaniard, who is widely regarded as the best up-and-coming player on the ATP Tour, had the Arthur Ashe crowd on its feet when he produced an incredible behind-the-back return in his match with Jannik Sinner.

His Italian opponent had smashed the ball back at him with a shot that looked destined to win the point, before a jumping Alcaraz defied the odds – and gravity – with a twisting backhand to return the ball.

Not only that, but the 19-year-old then went on to win the point with his next return, leading to the crowd giving him a standing ovation.

Perhaps unsurprisingly, Twitter was awash with praise for the No. 3 seed after watching his New York heroics, with some calling it the best shot they had ever seen. 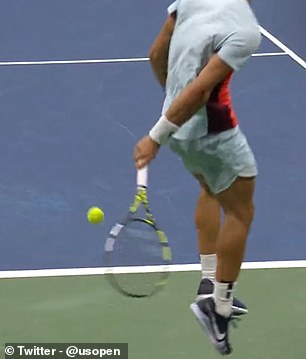 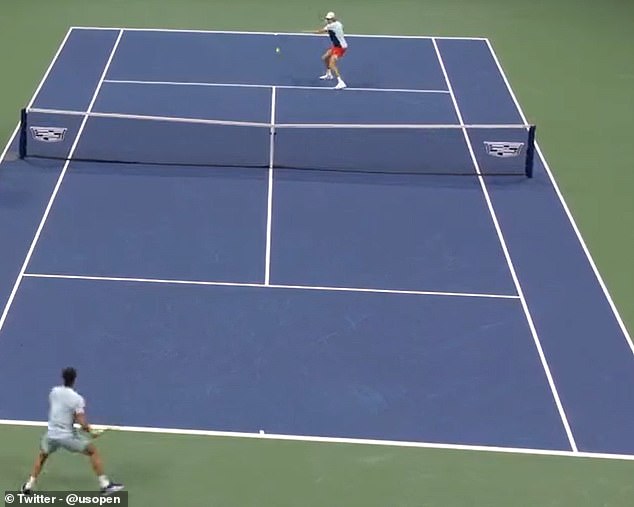 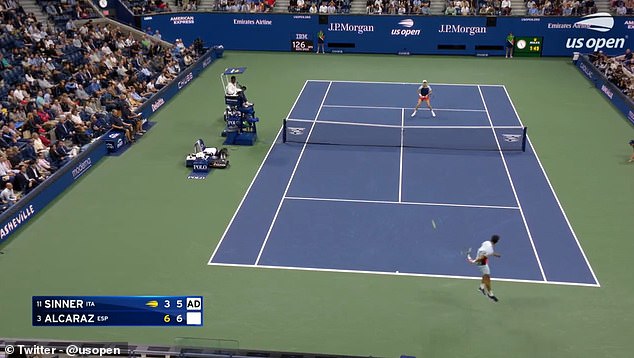 The world No. 3 looked to have lost the point before somehow managing to make the return 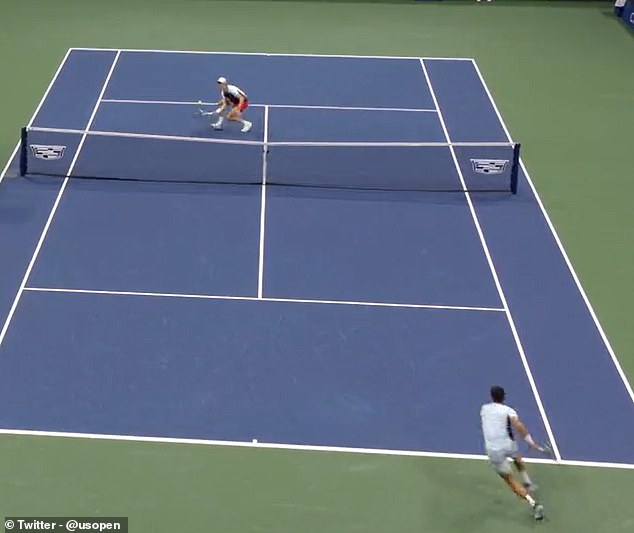 One viewer noted: ‘Carlos Alcaraz just hit the greatest shot I’ve ever seen in my life,’ while another added: ‘It’s almost midnight on the East Coast and Carlos Alcaraz is hitting circus shots in the US Open.’

On a wider point, the US Open’s official account then summed up the feelings of many by tweeting: ‘If this match is the future of men’s tennis, we are in for a great era ahead.’

Sinner is also just 21, with the pair set to go head-to-head for many years to come, while the era of Rafael Nadal, Roger Federer and Novak Djokovic nears its conclusion. 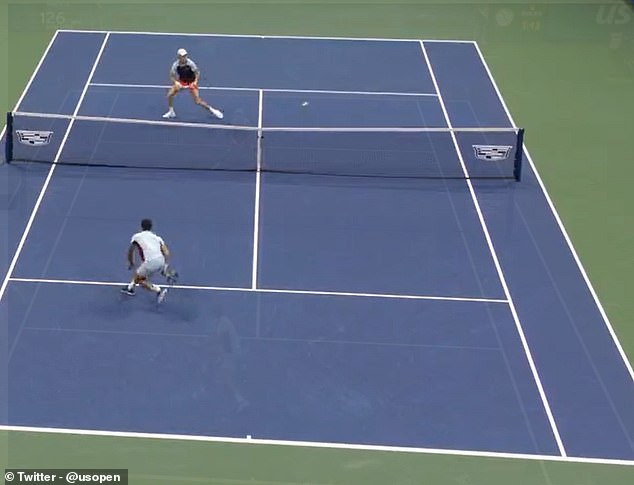 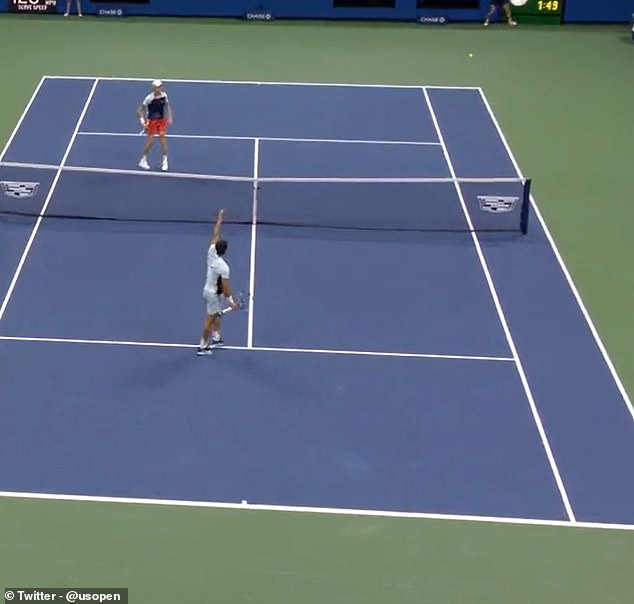 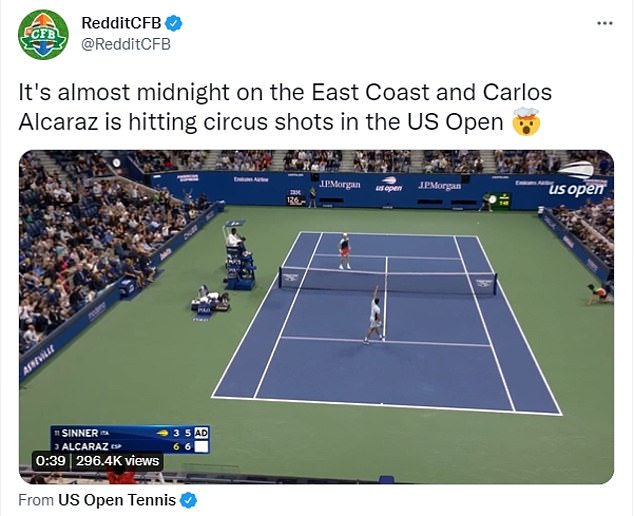 The pair were facing off in the US Open quarterfinal for a place in the last four and a matchup with the last American standing, Frances Tiafoe.

Heading into the match on Wednesday night, Alcaraz was the highest seed left in the men’s singles, with Daniil Medvedev and his countryman Rafael Nadal having both been knocked out earlier in the tournament.

Alcaraz went on to book his place in the last four after a five-set epic until 2:50am ET.

The Spaniard has surged into tennis’ next star. He has quietly sprung from the hotbed of tennis that is south east Spain, having grown up with parents Carlos and Virginia and three siblings in El Palmar, Murcia and continues to keep a low profile off court.

Alcaraz’s social media is filled with content of him practicing or working out. It seems he is unadulteratedly focused on his career.

There is the odd moment where the teenager shares photos of him playing golf or enjoying the coast.

He is coached by fellow Spaniard and former world No. 1 Juan Carlos Ferrero  — since 2018 — who shook his head in amazement at his pupil’s stellar shot Wednesday. 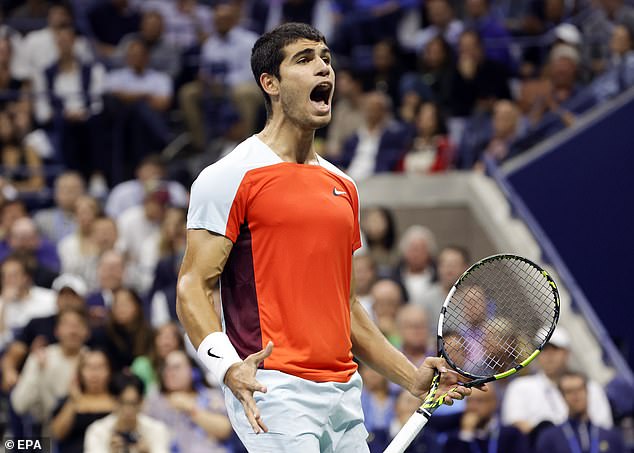 Alcaraz is seen by many as the brightest young prospect in tennis, and he’s still only 19

In an interview with ESPN in May, Alcaraz revealed he had a poster of Roger Federer on his wall during his youth. Although, he does not want to be an newer iteration of his idols.

Alcaraz is one of four brothers with Alvaro the eldest and Sergio and Jaime younger than Carlos and his father was head coach at one of the city’s tennis clubs.

According to ESPN, during the embryonic stages of his tennis career, Alcaraz’s family could seldom afford to send him around Europe to compete in tournaments.

Resultantly they were assisted by local businessman, Alfonso Lopez Rueda, who sponsored Alcaraz’s first overseas tournament and many beyond. 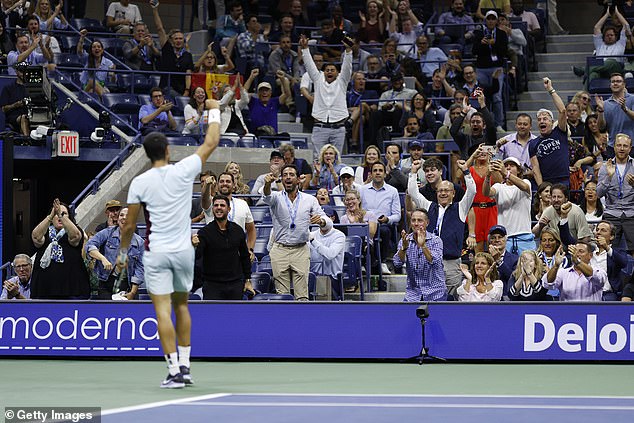