No trips abroad? Caretaker wanted for 400-acre Scottish island… with just birds for company – and you must have ‘powerboat-driving competency’

By Mike Merritt For The Daily Mail

It’s the perfect summer getaway for those not wanting to worry about social distancing or the holiday green list – an uninhabited island with only birds for company.

An opportunity has arisen for a caretaker to look after a 400-acre Scottish island. Isle Martin has been the site of a monastery, a herring curing station and a flour mill, but is now designated as a bird sanctuary.

Water can only be heated on a wood stove and there is just enough electricity to charge a phone or a laptop.

Beyond the island are the Summer Isles – said to be the inspiration for pagan horror film The Wicker Man.

The post is open to one person or two sharing with £150-a-week expenses, but at least one ‘must have powerboat driving competency’ since the nearest mainland is just under a mile away at Ardmair in the Highlands.

The job runs from June to the end of September and the deadline to apply is Tuesday.

The Isle Martin Trust was established in May 1999 as guardian of the island on behalf of the communities of Lochbroom and Coigach after it was gifted by the RSPB.

‘Expressions of interest are invited for a voluntary post on our community-owned island from June to end September 2021,’ says the advert.

‘This post is open to one person or two people sharing.

‘The caretaker will manage their own duties drawn up in agreement with the trustees (eg cleaning toilets, supervising/carrying out Covid-compliant sanitising, meeting and greeting visitors, assisting visiting volunteers, cash handling ) equivalent to approximately three hours per day. 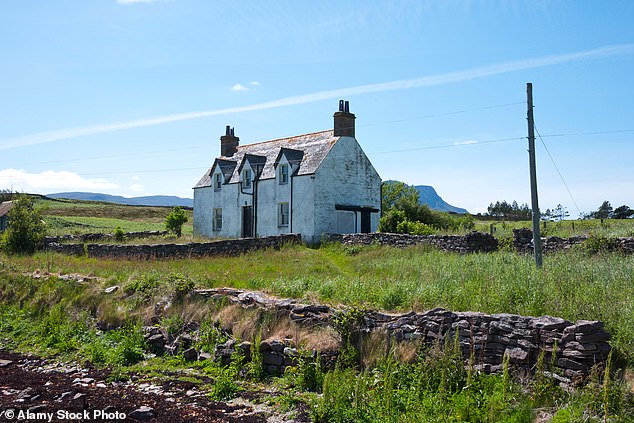 ‘There is scope to enjoy many opportunities the island offers such as ornithology, walking, water sports, art, archaeology, gardening, general care for the land, buildings and environment.

‘We welcome volunteers who bring specific skills they may wish to share for the benefit of the community during their time on the island.

‘Basic accommodation is provided free and likely to be in the Boa House. There is running cold water and limited amounts can be heated by wood stove. The only electricity available is sufficient to charge a phone/laptop.

‘At least one person applying must have powerboat driving competency.

‘Expenses of £150/week available. No further expenses are available for locating to the island although use of the boat is free.’

The island has visitors in the summer, transported by ferry, and a couple of properties that can be rented for stay in the season. But no decision has yet been made this year yet because of the pandemic.

To apply candidates must write a maximum of 500 words describing themselves, their relevant knowledge, experience and skills and why they should be considered for the post.

There is little in the way of documented history of Isle Martin prior to the late 18th century, although the island must have been an important place for many years prior to that. It is probable that the island has been inhabited off and on for several thousand years.

The only specific, but anecdotal, references are to a St. Martin who is reputed to have established a monastery on the Island, probably around 300-400 AD and after whom the island is named