Care staff have taken the fight to coronavirus by moving into the care homes where they work and setting up tents in the garden.

As part of a ‘no-one in, no-out’ policy’, staff at Victoria House on the Isle of Wight have taken to the drastic measures in a bid to prevent Covid-19 spreading into the home, where there have so far been no infections.

Nine of the home’s 31 staff moved in on April 15, with three of them opting to set up residence under the stars.

Staff at a care home in the Isle of Wight have resorted to camping in the garden as part of a ‘no-one in, no-one out’ policy to protect residents from contracting the coronavirus

It is the first home in the region to do this and registered manager Claire Leggett, 31, admits she wanted to act quickly before any of her 20 residents contracted the virus.

‘I’m the first one to do it on the Isle of Wight, said the manager of two years. ‘It was a mere thought in the plan probably a week before. It was part of a contingency plan – it was the very end of my contingency plan.

‘I was hoping that I would never have to get to that stage but I was very much keeping myself up to date with the news and the figures and the facts and watching the daily updates from the government.

‘I thought to myself, “this is not going to be going away anytime soon, it is very serious”, so I thought about just being proactive. 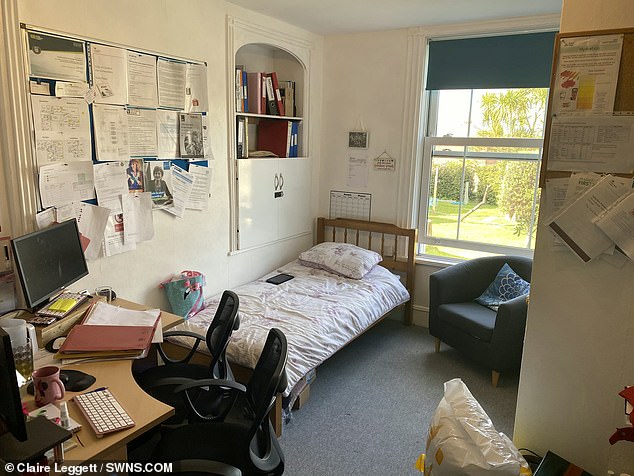 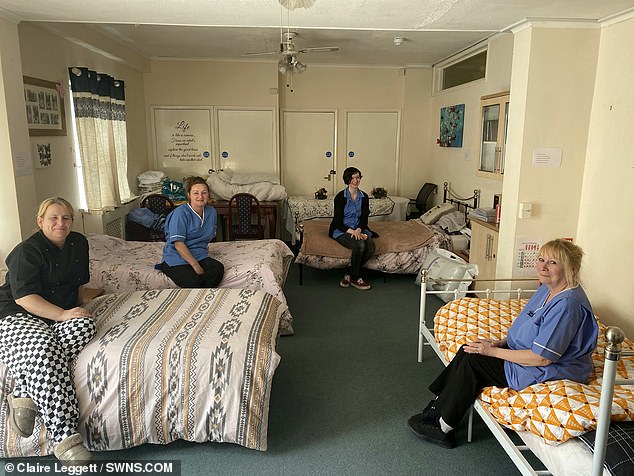 ‘I thought, ‘I’m not going to wait for my residents to show signs or symptoms and for it to come into the home and then decide to lockdown. I wanted to shut down the home before it came in.’

Despite the novel idea, Claire admits her staff came up with the plan of using tents, due to the lack of space within the residence.

She has taken to sleeping in the boiler room while her deputy manager Trudi Chamberlain is on a mattress in the office.

She said: ‘It is incredibly difficult because we don’t have staff facilities.

‘It is an old Victorian house and we’ve got twenty rooms – we’re full so we don’t have any spare rooms.

‘They actually made the suggestion of tents – I initially thought that we would just have to fit in the home.’ 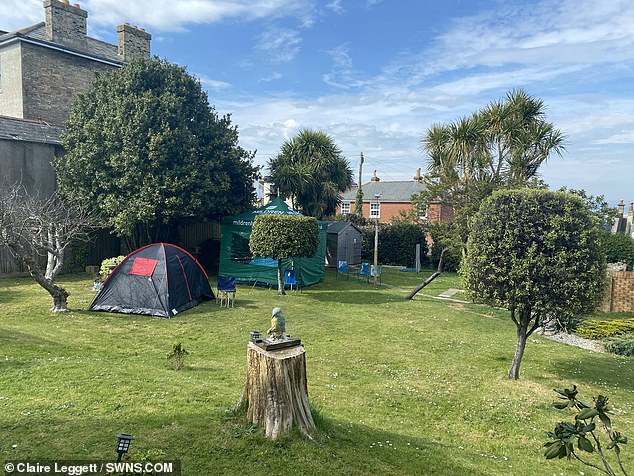 So far none of the residents in the care home have contracted the virus and the no-one in, no-one-out’ policy has come in as a measure to help protect them from Covid-19

With residents in the home aged up to 103-years-old, Claire felt she had no choice but to do everything she could to protect the lives of residents who are like extended family to the staff.

‘If it was to come into the care home, it would just spread like wildfire,’ she added.

‘They are just like an adopted larger family really and it’s just like having your nan and your grandad – we treat them like they are our own.

‘I would just be absolutely mortified if anything happens – it’s sad anyway when one of them passes away.

‘Should something happen because of the coronavirus, I would feel – I know you can’t – but I would feel responsible.’

Despite the novel solution, the care home is still not without problems. PPE equipment is in short supply, with Claire having to pay £15 for a box online. Food supplies are only restocked when they can find a slot to book a home delivery.

However, Claire remains upbeat while also sharing her gratitude for the staff who have moved in, adding: ‘I am trying to make things as fun as I can for staff because obviously they have given up quite a hell of a lot to come into the home.’

Care homes across the country have been plunged into crisis by the coronavirus, with many, like hospitals, suffering from a lack of PPE equipment which is raising the chances of the virus being contracted at residences.

The National Care Forum (NCF), which represents not-for-profit care providers, has estimated that more than 4,000 people may have died after contracting Covid-19 across all residential and nursing homes before April 13.

This is significantly higher than the official weekly figures released by the Office for National Statistics (ONS), which recorded 217 care home deaths connected to the virus up until April 3.

The NCF collected data from 47 care homes which support more than 30,000 people across the UK, accounting for 7.4 per cent of the care sector population.

It found 299 confirmed or suspected Covid-19 deaths across those specific homes in one week between April 7 to April 13, which is almost three times the number of deaths in the preceding month, when they found 102 deaths between March 6 and April 7.

When scaled up to reflect the UK’s care home population, the NCF estimated that 4,040 people may have died of a coronavirus-related illness before April 13.