A care home nurse who was fired after attending a protest claiming the global pandemic is a hoax insists she has seen ‘no evidence’ of a killer virus.

Carley Louise Stewart, 31, of Preston, was among the 10,000 Covid-19 conspiracy theorists who took to the streets of London in August to demonstrate against lockdown restrictions and vaccination programmes.

Dressed in her uniform from the Ribble View care home in Fishwick, and brandishing a placard with ‘We have empty beds’ on one side and ‘Nurse on call. Where’s the pandemic?’ on the other, the mother-of-two argued lockdown has done more harm to the British public than coronavirus.

Her claims come after the number of lives claimed by Covid-19 worldwide since the outbreak emerged in China late last year reached the grim one million milestone on Sunday.

Carley Louise Stewart, 31, of Preston, was among the 10,000 Covid-19 conspiracy theorists who took to the streets of London in August to demonstrate against lockdown restrictions and vaccination programmes

Having lost her job, Carley said she’s now determined to speak out on behalf of people who are ‘suffering’ as a result of being isolated from friends and family.

‘At the start of the pandemic, I was worried but as time went on, I saw absolutely no evidence of a killer virus, let alone a pandemic,’ she told FEMAIL.

‘While there were news reports saying the elderly were dying in droves in care homes, in the home where I was working no one became ill and no one died. Of anything.

‘I can’t bear dishonesty of any kind, and I could see dishonesty on a massive scale during this so-called pandemic. I couldn’t stand by and not say anything. I’d be as complicit in the lies if I did that.’ 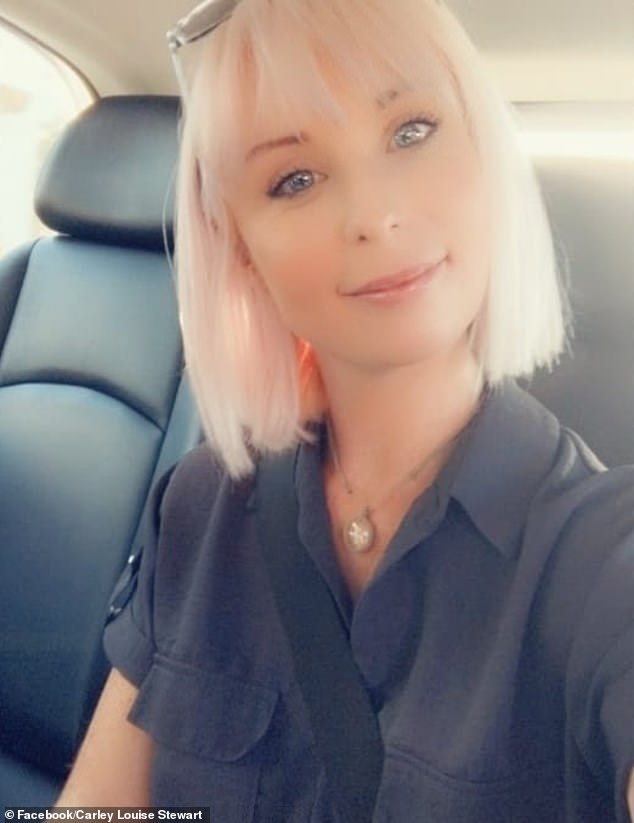 Having lost her job, Carley said she’s now determined to speak out on behalf of people who are ‘suffering’ as a result of being isolated from friends and family

She added: ‘I’m not doing this for myself – I don’t need the hassle to be honest. I’m doing it for the people who are suffering, especially those in care homes, separated from friends and family, slowly losing the will to live.

‘Thanks to the lockdown, people are now malnourished, despairing and losing their minds. Where are the figures on that? Many care home residents are now at breaking point and I need to speak up on their behalf.’

When the UK was plunged into lockdown in March this year, Carley told how she and her colleagues prepared for the worst.

But she claims no deaths occurred at the care home where she worked, between January and August, leading her to have doubts about the scale of the pandemic and the measures in place to stem its spread. 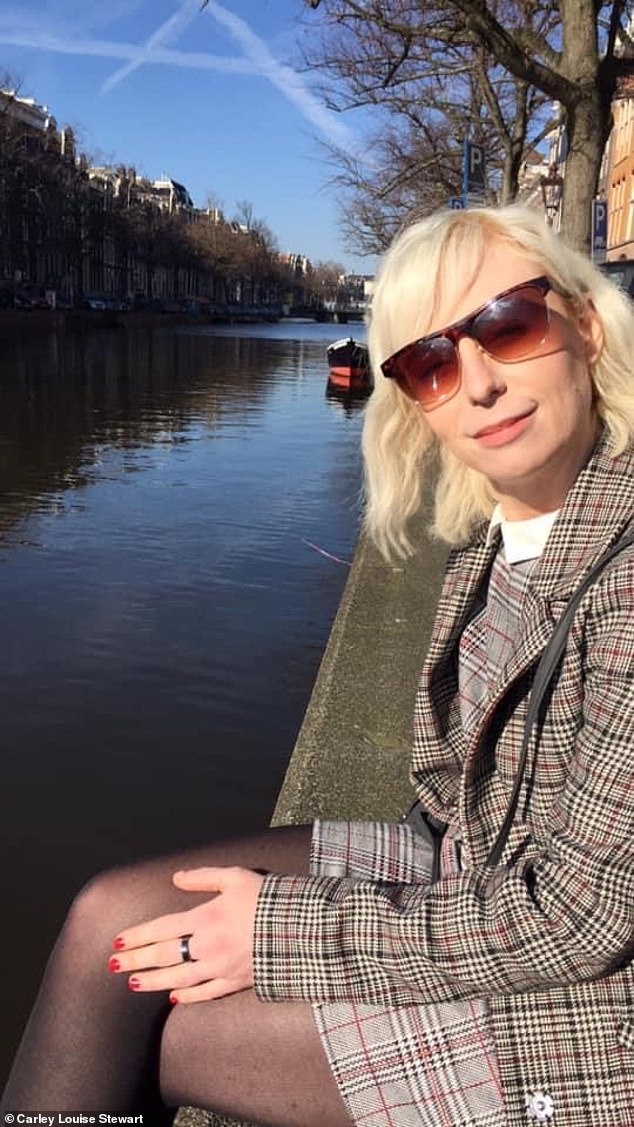 When the UK was plunged into lockdown in March this year, Carley told how she and her colleagues prepared for the worst. But she claims no deaths occurred at the care home where she worked, Ribble View, between January and August, leading her to have doubts about the scale of the pandemic and the measures in place to stem its spread 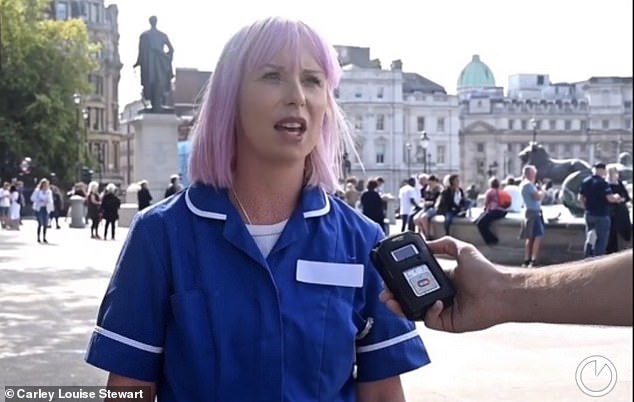 Dressed in her uniform and brandishing a placard with ‘We have empty beds’ on one side and ‘Nurse on call. Where’s the pandemic?’ on the other at the protest, mother-of-two Carley argued lockdown has done more harm to the British public than coronavirus

When she decided to attend the rally organised by Save Our Rights UK, a group led by political campaigner Louise May Creffield and Jeremy Corby’s activist brother Piers, Carley said colleagues of hers shared her line of thinking.

‘By then, I could see the harm the lockdown was doing – not just to the elderly in care homes, many of whom had become depressed and suicidal due to being distanced from their loved ones, but to everyone,’ she explained.

‘I was hearing about suicides, murders, domestic violence and child abuse. Mental health problems soared as restriction after restriction was put in place.

‘I saw no virus, no deaths but I could see that the lockdown was killing people.’

She went on: ‘I tried to get [other nurses and doctors] on board but they were too scared of losing their jobs. Although many of them agreed with my views on the situation… they didn’t feel they were in a position to speak out.’ 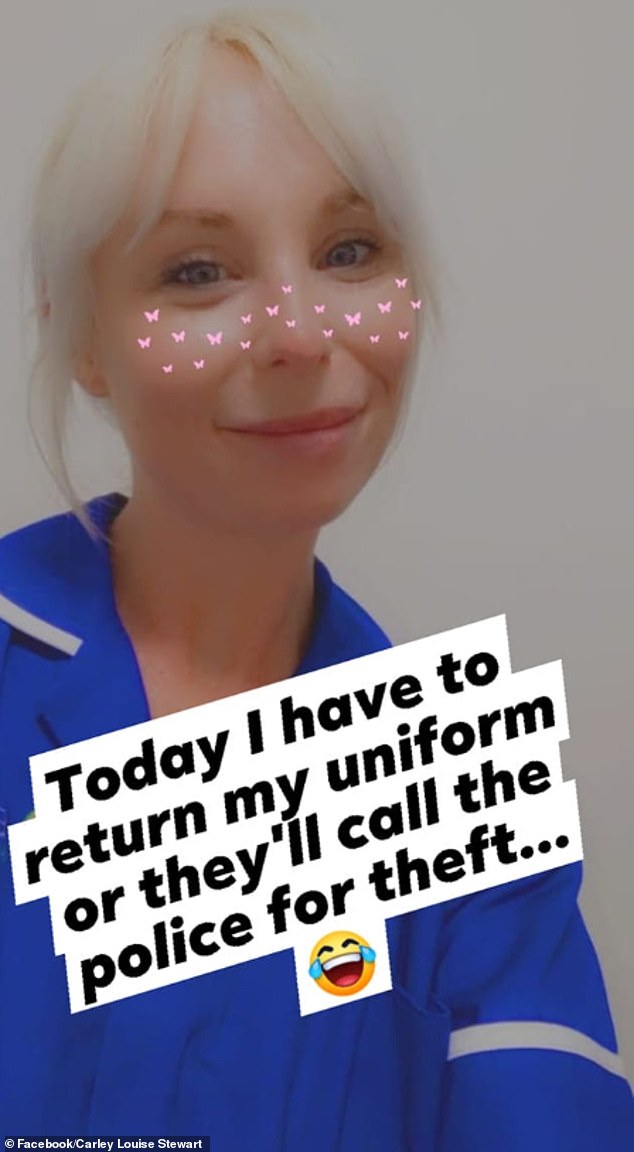 After the protest, Carley received a formal dismissal via email, which informed her wearing her uniform to a protest was a breach of company policy

Carley said she did manage to persuade a few other nurses to accompany her to the rally – most not in uniform – and got one of them to pose for photos with her, but couldn’t talk them into going public with their theories.

‘It wasn’t just their fear of losing their jobs, they were scared that they wouldn’t be believed, and that they’d be ridiculed and humiliated. So they just kept quiet,’ she claimed.

When photos of her at the protest went viral on social media, Carley received a phone call from her boss and was asked to attend a meeting.

‘I knew I was in trouble but I didn’t care,’ she admitted, adding that she told the care home manager: ‘I can’t work like this and you shouldn’t be either.’

She said she later received a formal dismissal via email, which informed her wearing her uniform to a protest was a breach of company policy. 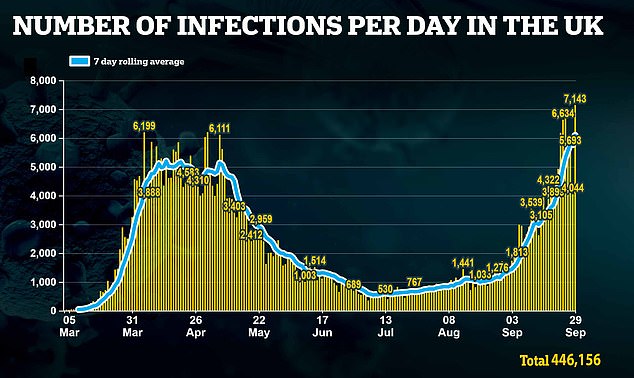 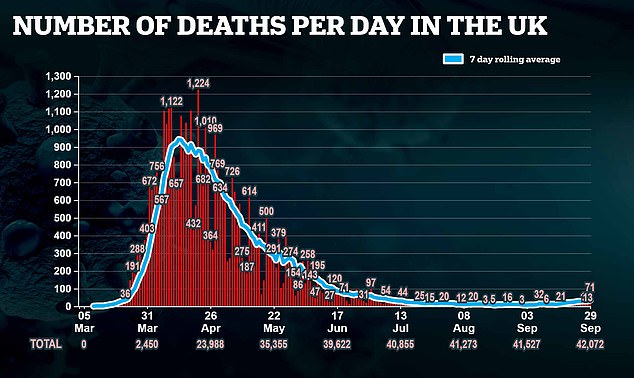 Yesterday Britain recorded another 7,143 coronavirus cases and 71 deaths as the outbreak continues to grow with both infections and fatalities spiking more than 40 per cent in a week

It also stated that Carley attending a protest and exposing herself to thousands of people with no social distancing meant she was putting herself and, in turn, the care home staff and residents, at substantial risk.

More than 15,000 people died of the virus in care homes earlier this year, according to official figures, after it was reported that many elderly residential facilities were flooded with Covid-19 patients returning from hospital.

Carley said she doesn’t believe viruses spread in the way we are led to believe.

Covid outbreaks in care homes have increased fourfold in the past two weeks, raising fresh concerns that they are once again becoming deadly coronavirus hotspots.

According to recent figures, there were 35 covid-related outbreaks in care homes in the first week of September – which rocketed in the second week to 228 incidents.

The latest week’s statistics reveal a dip, to 134 outbreaks in care homes, but show how the virus has continued to spread since the start of the month.

It means the number of Covid outbreaks in care homes has become as high as it was in the second week of May.

With infections rising at a worrying rate across the country, care homes are yet again among the worst-hit locations for coronavirus outbreaks, vying only with schools for the highest number of cases.

Jason Oke, senior statistician at the University of Oxford, said: ‘Acute Respiratory Infection incidents broadly followed the trends in Covid cases, so as the cases pick up in September it is not surprising that incidents in care homes should follow in the absence of any effective measures to prevent it.’

The World Health Organisation [WHO] states Covid-19 is transmitted through direct contact with respiratory droplets of an infected person generated through coughing and sneezing, as well as people touching surfaces contaminated with the virus and then touching their eyes, nose or mouth.

‘Personally, I know through my studies, that viruses are not even contagious – they’re the body’s reaction to being generally unhealthy or run down,’ Carley argued.

‘Colds and flu – coronaviruses – are outward symptoms of your body having a clear-out and fixing itself. The best way of not getting ill is by eating healthily, exercising regularly, avoiding toxins, drinking lots of water and getting enough sleep.

‘Vaccines and prescribed drugs are not about health – they’re just about the big pharmaceutical companies making money. They make money by keeping us ill: most people know that now.’

Outspoken Carley says she doesn’t care what people think of her, adding: ‘I know who I am and if anyone thinks I’m something I’m not, that’s their prerogative. What other people think of me is none of my business.’

Speaking about losing the job she ‘loves’, she admitted: ‘It’s very important to me – but the truth is more important.

‘I knew that by speaking out on social media – which I was doing a lot by then – and attending protests, there was a risk that I’d be suspended or sacked, but it was a risk I was prepared to take.

‘Like most people I need money to live, but I had some savings and I knew that if I was fired, I could get by on that for a bit. I’m a very “in the moment” kind of person and try not to think too far ahead and it was that part of my personality which enabled me to do what I did.’

Knowing she has a four and seven-year-old to support, Carley’s newfound followers offered to set up a GoFundMe page for her, but she declined.

‘It didn’t seem right. I’m managing OK at the moment – for the next month or so anyway – and I’m confident that a new job will pop up soon,’ she said.

‘For now though – being a truther and whistleblower – is my job. I feel this is what I’ve been put here to do. It’s going to be a fight, but I’m ready.’