A care home boss has revealed how her husband was driven to despair and killed himself as residents died from Covid-19 and their sick staff struggled to get PPE.

Vernon Hough ran Gwastad Hall Nursing Home near Wrexham with his wife Louise, but the home became overrun by Covid last year and many of the residents died.

Father-of-four Vernon, 61, was found fatally injured at a police headquarters in May last year – just a mile from his care home where he was ‘devoted’ to his 40 elderly residents.

His heartbroken wife, who has since retired, said Vernon was finding it difficult to deal to see the residents suffering, securing PPE for staff and trying to get medical help to the private care home.

An inquest into his death previously heard that police officers found him dead in his car in Llay, Wrexham, with a wound to his head from the shotgun.

Vernon Hough ran Gwastad Hall Nursing Home near Wrexham with his wife Louise (both pictured), but killed himself in May last year after their care home was overrun by Covid

The staff at the North Wales care home were forced to make their own PPE out of duvet covers and shields from laminated paper due to supply issues at the height of the pandemic.

The extreme pressure amid the pandemic took a serious toll on Mr Hough, who was normally a loud man who enjoyed a joke and entertaining residents, his devastated wife said.

Mrs Hough, who lived next door to the care home with Mr Hough, said: ‘My husband committed suicide, My husband shot himself. We were watching patients die.

‘We are very fond of our patients but he is not medically trained. The week prior to this we had 15 staff off sick and everyone was in rooms isolating. We had to take four patients each so we could get through feeding them all.’

Mrs Hough said her husband was also queuing in supermarkets in a bid to find toilet roll amid supply issues, as well as looking after the residents in the home.

She claimed they did not have any oxygen to give the residents who were unwell with Covid, despite her ‘begging’ the health board to provide the home with some.

She explained: ‘Imagine a fish pulled out of water. That is how they were gasping for air. I had no oxygen here.

‘I was begging the health board for oxygen just to give them some relief. There is still no oxygen in any care home, who decided this I don’t know.’

Mrs Hough claimed that within 36 hours many of the residents had died due to a lack of oxygen, adding that some of residents were not able to see their families.

The care home boss said the pandemic began to take its toll on her husband, who started losing weight, and she warned him to take a step back from the care home.

She continued: ‘I told him to stay at home for at least a week, stay away from the place and do not turn the telly on.

‘I said we would go on holiday at the end of June and get away from all this and the next day he went to feed his patients. 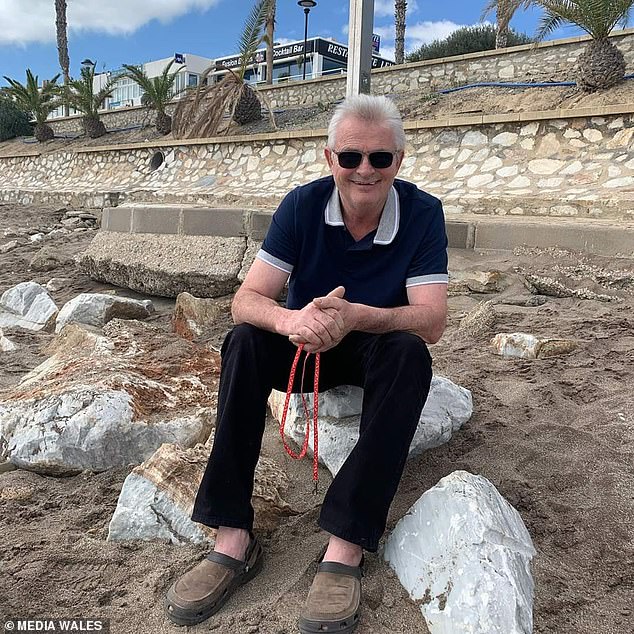 Father-of-four Vernon (pictured), 61, was found fatally injured at a police headquarters in May last year – just a mile from his care home where he was ‘devoted’ to his 40 elderly residents

‘One of the ladies wasn’t very well and he came back, got his shotgun and shot himself.’

Grandfather Mr Hough described looking after the residents as a labour of love and was deemed a ‘surrogate father’ to many of them.

His staff have since planted a memory tree in tribute to their boss at the care home – and described him as a ‘special man who will be forever in our hearts’.

Mrs Hough said she believes a series of failings by the Welsh Government and local health boards led to Covid running riot in care homes, while a lack of testing, PPE and support made the situation worse.

Mrs Hough has joined a group of families, called the Covid Bereaved Families for Justice Cymru group, calling for for a Welsh Government inquiry into the pandemic.

But Mark Drakeford has refused calls for a Welsh inquiry into Covid, saying he believes a UK wide inquiry is more appropriate.

In March and April last year, hospitals in Wales were discharging Covid patients into care homes in a bid to try and free up beds amid the height of the pandemic.

Mrs Hough was pressured to take back patients without a Covid test, but she ‘refused’ to have any patients discharged from hospital without a test.

She said: ‘The local health board told me they were going to report me to CIW (Care Inspectorate Wales) for bed blocking.

‘I said “you can report me to whoever you like sweetheart but nobody is coming through my door until they have tested negative”.’

Despite their best efforts, the virus got into the care home and the staff were forced to make their own PPE out of duvet covers and shields out of laminated paper and headbands, according to Mrs Hough.

The problems were exacerbated by supply issues as the Welsh Government opted to supply homes directly with PPE, whereas in England it was done from suppliers.

Mrs Hough claimed this made it hard for her to protect staff, adding: ‘I couldn’t buy from suppliers because they would only supply homes in England.

‘We didn’t have anything. I was having to buy stuff on Amazon. We were wearing painters’ gowns, those all-in-one paper things. 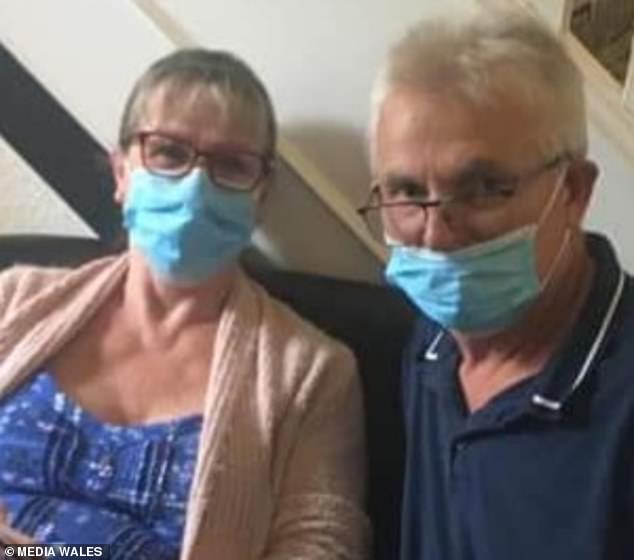 ‘People in the village here were making us theatre gowns out of duvet covers and face masks because I couldn’t get them from anywhere.’

Mrs Hough said she is furious that there won’t be a direct inquiry into what happened in Wales throughout the pandemic, saying that people are not aware of the ‘appalling’ things that happened in care homes and hospitals.

She said: ‘People in care homes are written off. Absolutely written off. I do hold the Welsh government accountable.

‘People say that we didn’t know what was coming but we had seen what had happened in Italy.

‘We knew this was coming, why did they not get prepared for this? Why did they say no to testing asymptomatic people?’

Mrs Hough added: ‘I wrote down what Mark Drakeford said. When he was confronted about whether the decisions were due to a lack of resources he said there have always been more tests available than are being used.

‘If they are available why not use them? But he said that residents and staff had to be symptomatic to be tested. He was killing people.’

Gwastad Hall was opened in 1987 after the Hough family converted the old hall on the 11-acre site in Cefyn-y-Bedd into a nursing home.

A Welsh Government spokeswoman said: ‘A UK-wide inquiry will have the capacity and force to oversee the interconnected nature of the decisions that have been made across the four nations and i the best way for the experiences of people in Wales to be properly understood.

‘The First Minister has spoken directly to the Chancellor of the Duchy of Lancaster about the many specific issues the inquiry must focus on to deal comprehensively with the actions of the Welsh Government and reflect the experiences of people in Wales.’

For confidential support, call the Samaritans on 116123, or go to www.samaritans.org.