The Arizona Cardinals have turned the page on their disastrous 2022 season by hiring Monti Ossenfort as the team’s new general manager.

The franchise announced the hiring of Ossenfort on Monday, one week after owner Michael Bidwill announced that head coach Kliff Kingsbury and general manager Steve Keim would not return following a dreadful 4-13 season.

The 44-year-old Ossenfort has spent the past three seasons as director of player personnel for the Tennessee Titans. Before that, he spent 15 seasons with the New England Patriots, helping the franchise win four Super Bowls. In 21 seasons, his teams have made the playoffs 16 times.

‘It was critically important for us to find the right person to lead us as general manager and there is no doubt in my mind that we have that in Monti Ossenfort,’ Bidwill said in a statement. ‘He possesses every attribute of a successful GM — passion, leadership, intelligence, work ethic — and his extensive experience has clearly prepared him for this role. We could not be more thrilled to have Monti and his family joining the Cardinals.’

Bidwill made the decision to go outside the organization to replace Keim, who had been with the team since 1999 and was the team’s general manager since 2013. The 50-year-old Keim took a medical leave of absence near the end of the past season, though the team never elaborated on the reason.

Ossenfort will be charged with building a winning team around quarterback Kyler Murray, who signed a $230.5 million contract last offseason that could keep him with the franchise through 2028. Murray missed the final month of the season after tearing the ACL in his right knee and could also miss the beginning of next season.

The Cardinals also have the No. 3 overall pick in the upcoming draft. 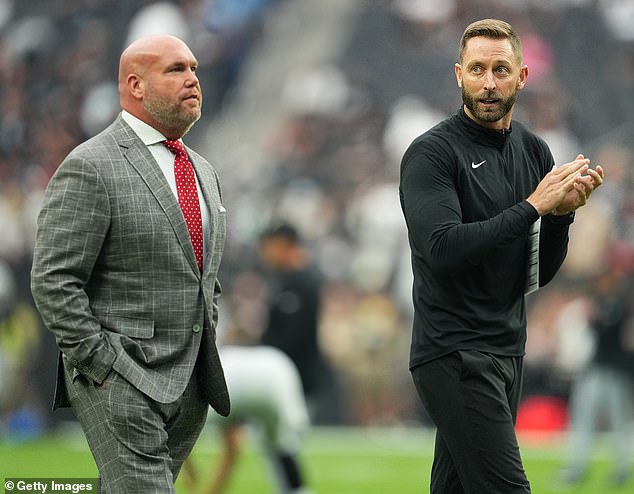 Cliff Kingsbury (right) was let go along with general manager Steve Keim (left) following the team’s dreadful 4-13 campaign, which was exacerbated by quarterback Kyler Murray’s torn ACL in his left knee. Keim took indefinite leave from the team last month for ‘health reasons,’ but will no longer be returning to the club in Glendale, Arizona

The Cardinals now turn to replacing Kingsbury, who had a 28-37-1 record during his four-year tenure. Bidwill said it was his preference to hire a general manager before finding a coach.

Ossenfort is expected to be introduced on Tuesday at the team facility.

It was a disappointing season for the Cardinals on a number of fronts.

There was future Hall of Famer JJ Watt’s surprise retirement and major injuries to Murray – the team’s franchise quarterback and one of the NFL’s highest-paid players – not to mention receiver DeAndre Hopkins.

Offensive line coach Sean Kugler was fired over allegations that he groped a woman during the team’s road trip to Mexico City, although he claims this is a case of ‘miscommunication or mistaken identity.’ Kugler has retained a law firm for an arbitration hearing on his behalf as he continues to deny the allegations against him. 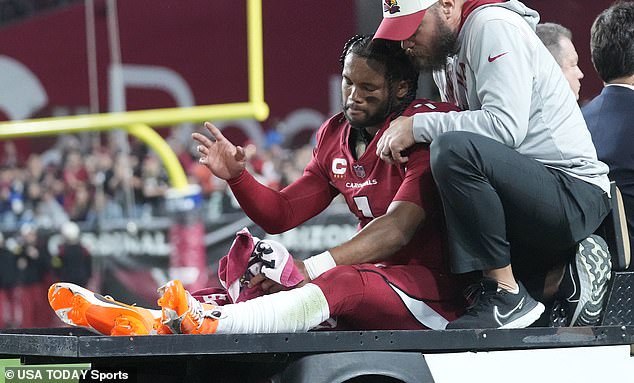 As initially feared, the Arizona Cardinals quarterback did tear the ACL in his left knee on a non-contact play in last month’s loss to the visiting New England Patriots

And then there is the curious case of Keim, who took his mysterious absence from the team in mid-December, never to return.

Murray also had several sideline spats with Kingsbury, and once described the team’s offense as ‘schematically F***ED’ following a brutal November loss.

The season began on a positive note, with Murray agreeing to stay in Arizona for the long term.

The former Heisman winner and top-overall draft pick signed a five-year, $230 million contract extension with the team prior to the season, which includes $160 million in guarantees.

But the contract raised eyebrows due to a ‘homework clause,’ that was first revealed by NFL Network’s Ian Rapoport in August. The ‘independent study addendum’ required Murray to review four hours of game film per week throughout the season. Failing to comply would result in Murray being deemed to ‘be in Default,’ according to the contract language.

After an uproar over the revelation, the team eliminated the clause from his contract. 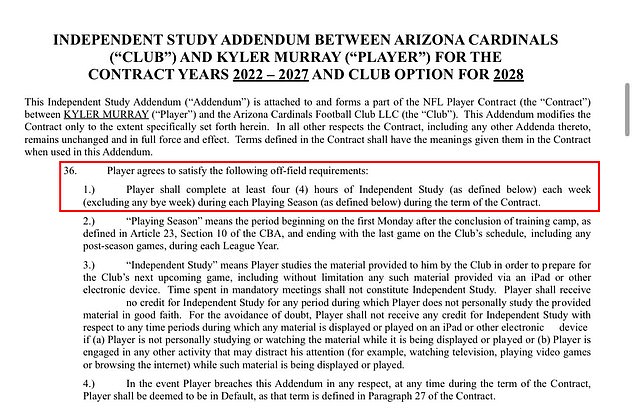 As NFL Network’s Ian Rapoport revealed Monday, the former Heisman winner’s new five-year, $230 million deal includes an ‘independent study addendum’ requiring him to review four hours of game film per week throughout the season. Failing to comply would result in Murray being deemed to ‘be in Default,’ according to the contract language

Murray was never accused publicly of failing to prepare for opponents – a process that typically involves a significant amount of film study. Some quarterbacks not only watch the game film, but also help produce individual versions designed for specific teammates, reflecting their individual assignments.

However, an old quote of Murray’s from a 2021 New York Times profile may be revealing: ‘I think I was blessed with the cognitive skills to just go out there and just see it before it happens. I’m not one of those guys that’s going to sit there and kill myself watching film. I don’t sit there for 24 hours and break down this team and that team and watch every game because, in my head, I see so much.’

In any case, Murray remains entrenched as the Cardinals’ quarterback, that is, whenever he recovers from his major knee surgery.

As for Kingsbury, ESPN’s Adam Schefter said he expects the former Texas Tech quarterback to get other chances to succeed in the NFL.

However, his track record at both the college and pro levels is troubling, given his teams’ reputation for dying over the course of the year.

Over four years in Arizona and six more at Texas Tech, Kingsbury’s teams are 45-24-1 over the first seven games of the season, but just 18-54 the rest of the way.