Although Cardi B didn’t specifically name President Biden, the wealthy rapper angrily called out ‘anybody that is responsible’ for inflation as the price of lettuce ‘rises to $7.’

The rapper, 30, revealed on Wednesday that she budgets every week to avoid going broke despite her $62 million net worth.

She urged officials to address the crisis, especially for the middle and lower class who might not be able to afford the soaring prices.

‘When I go to the f***** supermarket… I’m seeing that everything tripled up – that like lettuce was like $2 a couple of months ago and now it’s like f****** $7,’ the rapper said in a video posted to Twitter.

Cardi B, 30, slammed ‘anybody that is responsible’ for the rising cost of living. The rapper posted a video onto Twitter claiming lettuce is now up to $7

Cardi acknowledged that she could either keep silent or speak up while arguing the price to buy groceries is more than eating out.

Some people argued that the rapper shouldn’t be complaining about inflation since she is a millionaire.

But the Grammy winner who is no stranger to indulging in the finer things in life, including $10,000 Hermès handbags, quickly addressed the contentious comments and claimed that managing money helps to ensure the longevity of wealth.

Cardi furiously opened up about her own money management techniques and how she needs to know exactly what it is being spent on.

She argued that something has to be done to help the middle and lower class, especially if she is noticing a dent in her $62 million net-worth 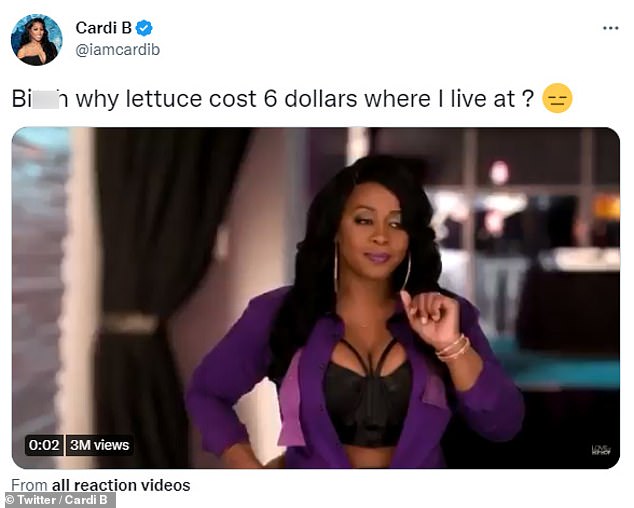 Back in September, Cardi shared her outrage over the ‘unbearable’ cost of living and the hot housing market.

She admitted that she has to financially help her family and friends and questioned how others survive.

‘I was looking at some areas. The way that the prices soar up… like how are people surviving? I want to know.

‘My family and my friends, they’re so grateful to have me, but it’s just like, what happens to people who don’t have a me?’

The rapper appears to enjoy the finer items in life, especially luxury handbags. But it appears she doesn’t let her wealth get in the way of speaking out for other people. 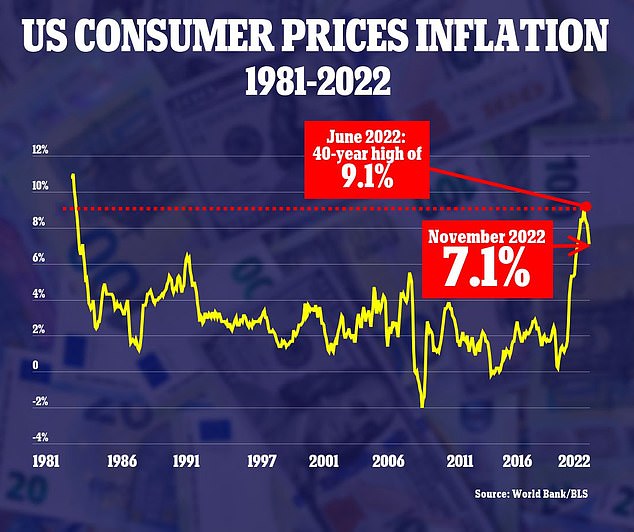 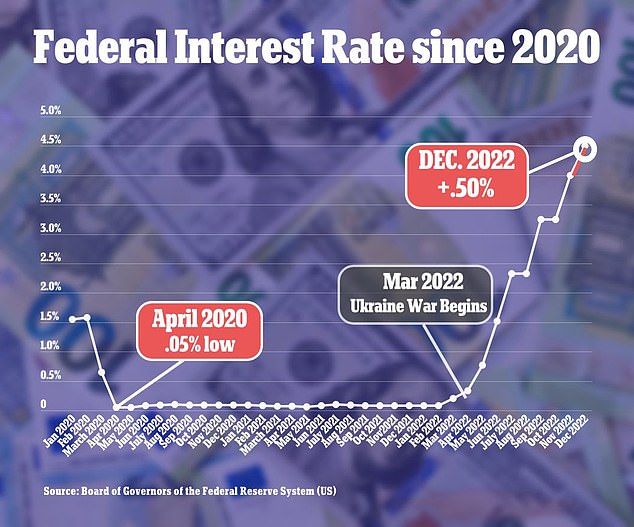 While inflation came down slightly in the later months of 2022, the U.S. saw record-high rates earlier in the year.

In November, inflation in the US came in at 7.1 percent. The number, still high, marked the fifth-straight month of shrinking annual increases.

The Wall Street Journal survey of 23 primary dealers, the large financial firms that do business directly with the Federal Reserve, found a majority expect a recession in the coming year.

It follows the Fed’s rapid rate hikes designed to battle soaring inflation last year, which saw the benchmark rate rise from near zero in March to a range of 4.25 percent to 4.5 percent by the end of the year.

The central bank forecasts that will reach a range of 5 percent to 5.25 percent by the end of 2023. Its forecast doesn’t call for a rate cut before 2024.

The Fed policy rate is now at its highest level since prior to the 2008 recession, as the central bank attempts to bring inflation down without triggering an economic downturn.

By the Fed’s preferred measure, inflation is still running nearly three times its 2 percent goal, having risen earlier in 2022 at its fastest pace in 40 years.