Car sales in 2020 fell by nearly a third as result of the Covid pandemic to a 28-year low, dramatic new figures from motor manufacturers have confirmed today.

As dealers and their showrooms were forced to close for two extended periods during the year because of the killer virus, sales to UK customers plummeted to around 1.63million – the lowest since 1992 – though electric car sales soared.

It confirmed a year-on-year decline of by 29.4 per cent, down from the 2.31million new vehicles bought in Britain in 2019.

The decline is the most significant experienced since the height of the Second World War in 1943 at time when civilian car building stopped as factories were switched to military production.

Sales crash: New car registrations nosedived to a 28-year low in 2020 as the pandemic restricted the number of motors sold by dealers

While sales of electric cars jumped nearly three-fold from their relatively low level in the face of the pandemic, registrations of diesels have nearly halved.

With the contrasting fortunes for EVs and oil burners, it means pure electric and plug-in hybrid cars now account for one in 10 passenger vehicles bought in Britain.

But car makers warn that a lack of investment in on-street charging points for motorists – especially those without driveways and off-street parking – could scupper the Government’s ambitions to meet its target to end petrol and diesel car sales by 2030.

With the deadline a mere nine years away, trade body bosses said it is a ‘big stretch to go from 10 per cent to 100 per cent electric sales in such a tight time-frame’.

The 29.4 per cent drop in car sales last year cost the UK motor industry £20billion and led to a £1.9billion loss in tax to Treasury, said the Society of Motor Manufacturers and Traders.

Manufacturers had hoped to bounce back to annual registrations of around 2million in 2021.

However, the Government’s latest announcement of a third national lockdown will almost certainly scupper optimism, as dealerships are instructed to bolt their showrooms doors yet again.

With restrictions due to last until at least the middle of February, if the infection rate doesn’t begin to flat-line there is a very real risk of the lockdown being extended into March, which is one of the most important months for car dealers.

March is historically the second biggest month for vehicles sales after September, which are the two months when new registration plates launch. 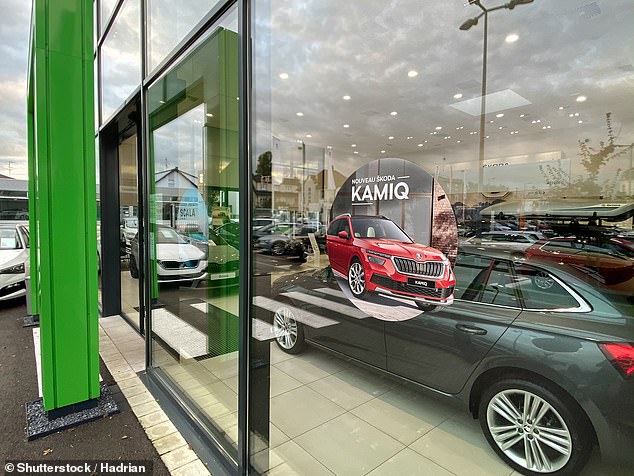 However, the fact that dealerships can now offer remote ‘click-and-collect’ services to customers means some of the impact of locked-down showrooms can be mitigated.

Commenting on the SMMT’s preliminary figures (exact numbers will be published at 9am today) Jim Holder, editorial director at What Car?, said: ‘With the latest lockdown announcement, the industry faces more tough months ahead, but the lessons of a tough 2020 ensure it goes into 2021 better prepared for the challenges it now faces.

‘This should prevent sales falling off the cliff edge, as we saw during the first lockdown in March.’

He added: ‘From March last year, it was clear 2020 was not going to be a good year for the UK automotive industry.

‘With retailers forced to close their doors for close to three months between March and June, and with varying restrictions imposed throughout the rest of the year, the challenges have been immense.’

Car bosses said the conclusion of a Brexit trade deal with the European Union had come as a ‘massive relief’ but warned there were still challenges ahead, including extra red tape which could add to the cost of exporting, importing and selling cars.

SMMT chief executive Mike Hawes said: ‘The no deal cliff edge was thankfully averted. But there are still challenges ahead.’ 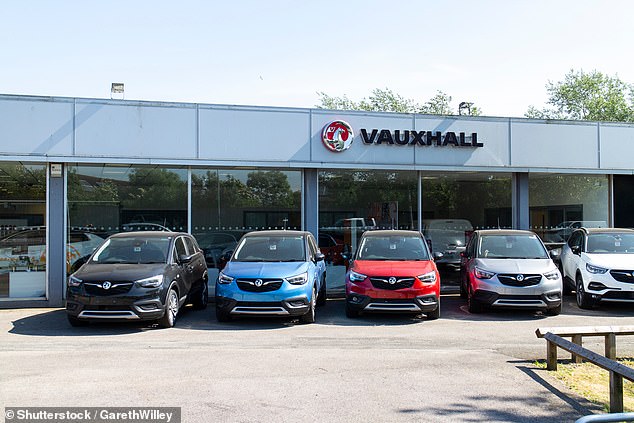 Experts say motor dealers are now better prepared to operate during the pandemic and through lockdowns, with click-and-collect services able to run at full steam

Against the drop in car sales overall, pure electric cars saw their share of the UK market more than quadruple to 6.6 per cent, up from a mere 1.6 per cent in 2019.

Taken together that means plug-in cars account for more than 1 in 10 sales.

They now account for just one in five new car registrations (20 per cent) compared to 28 per cent in 2019.

It’s a far cry from the high-point before the ‘dieseslgate’ scandal when they made up half the cars sold in Britain.

Petrol car sales were also down, but only by around a third to just over 1 million compared to 1.52million in 2019.

Their market share was down to 63 per cent from 68 per cent for the previous 12 months. 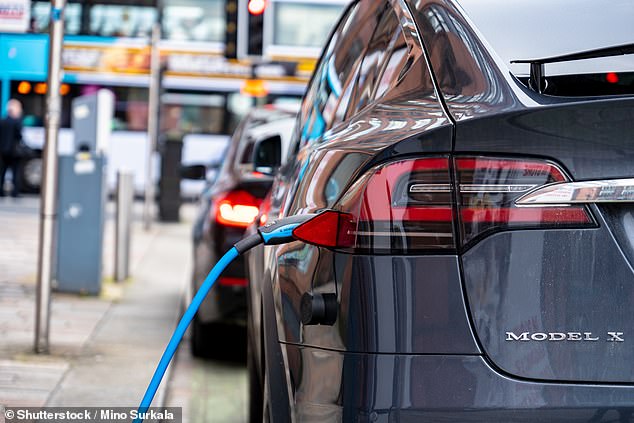 One in ten new cars bought in 2020 were plug-in models, either battery-electric vehicles or plug-in hybrids

And the move to electrification is set to accelerate further this year as Britons prepare for Boris Johnson’s proposed plan to ban the sale of new internal combustion engined passenger cars in from the start of the next decade.

In 2021 alone, some 29 new pure electric cars are due to be launched along with seven new plug in-hybrids, of which the SMMT is aware of.

That compares with 28 vehicles with a traditional and soon to be outlawed petrol or diesel internal combustion engine.

‘Government needs to invest billions in infrastructure to hit 2030 target’

But the SMMT says, with just nine years to go, its ‘possible’ government could miss its target for 100 per cent of new car sales to be electric or plug in hybrid by the 2030 deadline.

Lack of sufficient charging points is key brake on achieving the target, it says.

The Government needs to invest around £16billion to ensure there are sufficient charging points for such drivers.

SMMT chief executive Mike Hawes said: ‘What is holding people back from buying an electric car is not range anxiety but the lack of charging points, particularly for those wo do not have their own garage or driveway.’

That accounts for around half of all motorists, he said.

‘You need the reassurance that you can park your car and charge it overnight on the street – even if you live in a terraced house and have to park away from your own home.’

Mr Hawes noted: ‘Missing the target is a possibility. Electric vehicle production will have to accelerate ten-fold.’

He also raised concerns that electric cars built on the Continent may be prioritised for EU countries, delaying when Britons can get their hands on the latest plug-in vehicles.

‘There are penalties for the UK and for the EU for missing CO2 emissions targets.’

The UK also needs much more battery capacity for electric cars built in the UK if it is to avoid paying tariffs for breaching tightening UK-EU trade rules on local content in cars.

Electric batteries are at the heart of electric cars, and those built in Britain will need batteries made in the UK. And that means more battery production plants beyond the one announced by Britishvolt last month, which will be built in the North East.

The SMMT said that, based on current investment intentions, the UK should have 15GWh gigafactory capacity by 2024, enough to produce 250,000 pure electric cars a year a year.

But to produce 1million locally by 2030, the UK will need four times that capacity – around 60GWh a year.

By 2040 that will have to double again to 120GWh by 2040, as well as a surrounding battery/chemical supply chain, to support production of 2m BEVs.

Perhaps tempting fate, Mr Hawes concluded: ‘Whatever happens, this year can’t be as bad as last year. Manufacturers and dealerships are better prepared. We expect a bit more certainty. And it’s a good time to buy a new car.’