British car production levels fell by 11.3 per cent in April, with just 60,554 vehicles rolling off factory lines, according to fresh figures from the Society of Motor Manufacturers and Traders.

In what the SMMT dubbed a ‘volatile’ month, the impact of Russia’s invasion of Ukraine on supply chains, an ongoing global shortage of semi-conductors, model changes and ‘broader structural changes’ all combined to pile further pressure on the sector, the trade body said.

There were 7,752 fewer cars made in April than a year ago and the total was 14.7 per cent below the April 2019 pre-pandemic level.

This was itself down 44.5 per cent on April 2018 levels, due to shutdowns rescheduled to mitigate against the possibility of a no-deal Brexit, the SMMT said.

The SMMT said British vehicle manufacturers urgently need ‘relief on specific input costs, most notably energy, which have doubled in the last year and are putting UK manufacturers at a competitive disadvantage’.

Mike Hawes, SMMT’s chief executive, said: ‘The UK car industry is exposed to a host of issues that are undermining output and competitiveness.

He adds: ‘The foundations of the sector are strong and the transition to zero and ultra-low emission vehicles continues apace but we need more policies and measures that support manufacturing and encourage investment into the UK at this most challenging of times.’

Chris Knight, automotive partner at KMPG, said consumer demand for new cars remains high despite the cost of living crisis, but added the supply shortages mean that manufacturers still don’t have the ability to produce cars at pre-pandemic volumes, and ‘won’t for some time’.

The number of UK-built vehicles being exported also dwindled once again in April. SMMT said the closure of a major UK car plant last year was continuing to have an impact on export figures. 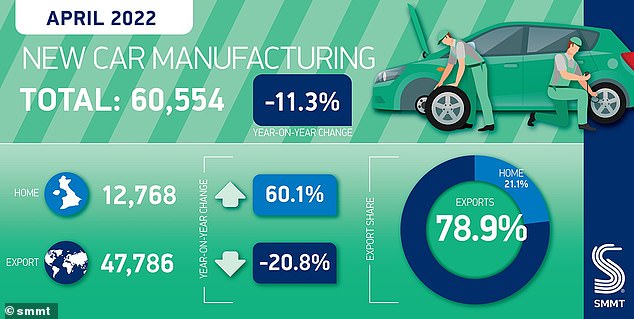 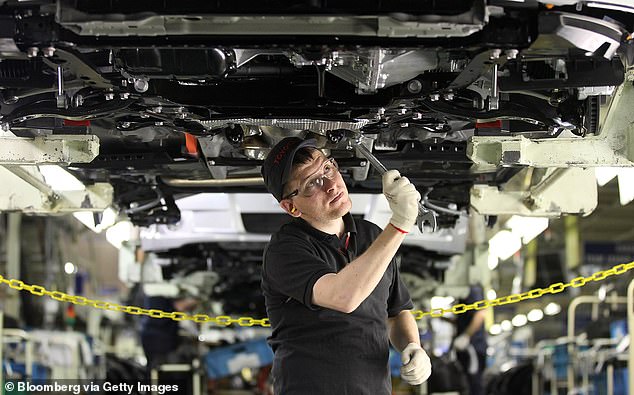 The SMMT said car makers urgently need ‘relief on specific input costs, most notably energy, which have doubled in the last year’

Production output for overseas markets fell by 20.8 per cent in April, driven by a 68 per cent slump in shipments to the US, and a 10.4 per cent drop in exports across Asia.

But, three in five cars exported headed to the EU in April, representing a 5 per cent uplift in shipments, while production for the UK grew for the second consecutive, surging 60.1 per cent.

This substantial rise was primarily the result of new models coming to market, attracting buyers into showrooms, but is flattered by comparison with April 2021 when the economy was restarting after lockdown with demand subdued, the SMMT said.

Around one in four cars made in April was electrified, equivalent to 16,010 units, up 2.1 per cent on the same month a year ago, bolstered by battery electric vehicle output, which was up 38.2 per cent.

The SMMT said the data suggested that, despite the sector operating in an ‘incredibly tough’ economic backdrop, the shift towards battery electric, plug-in hybrid and hybrid vehicles was ongoing.

Last month, figures from the SMMT revealed that UK car production fell by a third in March, marking the weakest March since the financial crisis in 2009.

This week, average UK petrol prices reached a new record high of 170.4p a litre, while the average price for diesel was 181.4p a litre on Tuesday, according to data firm Experian Catalist.

He added: ‘While wholesale prices may have peaked for the time being last week they are still worryingly high which means there’s no respite from the record-high pump prices which are so relentlessly contributing to the cost-of-living crisis.’