EXPRESS INFORMER > News & Politics > Captain Tom Moore wishes the Queen a happy 94th birthday as he is flooded with 25,000 cards

Captain Tom Moore has wished the Queen a happy 94th birthday as he himself is flooded with cards ahead of his centenary – and his daughter said her heart is ‘bursting’ over the £27million he raised for the NHS.

The Second World War veteran, who crowdfunded the sum by walking lengths of his garden in Marston Moretaine, Bedfordshire, sent out a message to the monarch saying: ‘Happy Birthday your majesty… With the highest regards, Captain Tom Moore’.

Captain Tom will himself turn 100 on April 30 – and the South Midlands Mail Centre in Northampton has already dealt with more than 25,000 birthday cards sent to him, with no doubt more to come before the day itself.

Staff at the mail centre have now reprogrammed sorting machines to separate Captain Tom’s mail into a dedicated collection box, and are now expecting to deal with hundreds of thousands of cards and letters in the next few days.

She added: ‘I’m having to get used to the thought of sharing you with millions and millions of people.’

Stephen James, the manager at the centre receiving thousands of cards for the veteran, told the BBC: ‘None of the team have ever known one person receive so much mail.’

It comes as Britain’s coronavirus death toll passes 16,500, with more than 100 healthcare workers dying with the infection.

The Queen is marking her birthday with her husband of 72 years, the Duke of Edinburgh, at Windsor Castle in Berkshire with a reduced household for their protection.

Captain Tom Moore wished the Queen a happy birthday from his Bedfordshire home as he was flooded with cards ahead of his centenary. His message said:  ‘Happy Birthday your majesty. With the highest regards, Captain Tom Moore’ 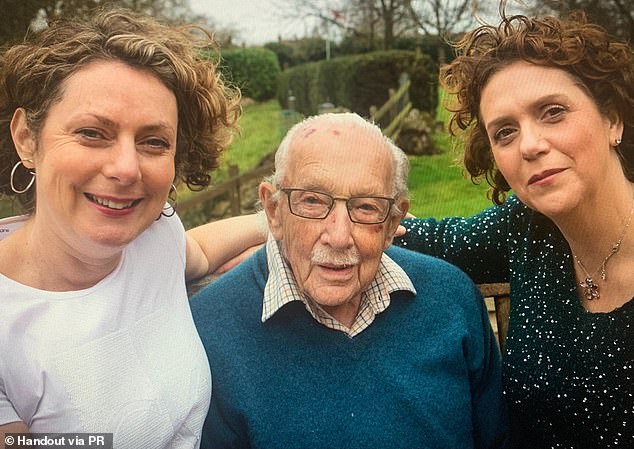 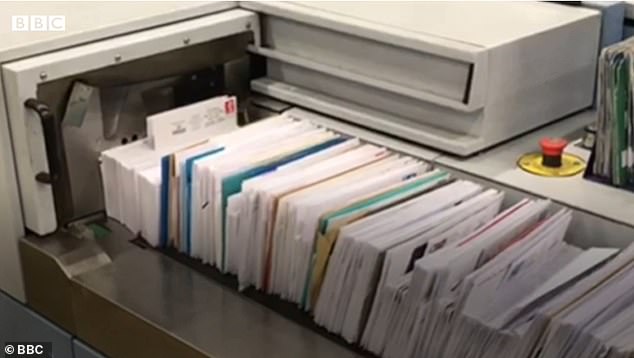 The South Midlands Mail Centre in Northampton has already dealt with more than 25,000 birthday cards sent to him, with no doubt more to come before the day itself 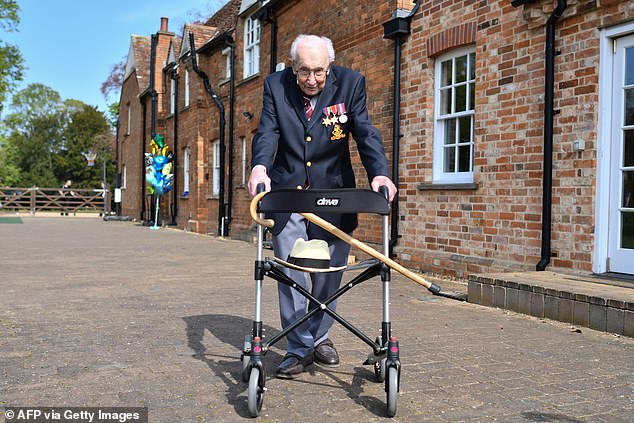 British World War II veteran Captain Tom Moore, 99, with his walking frame doing a lap of his garden in the village of Marston Moretaine, 50 miles north of London 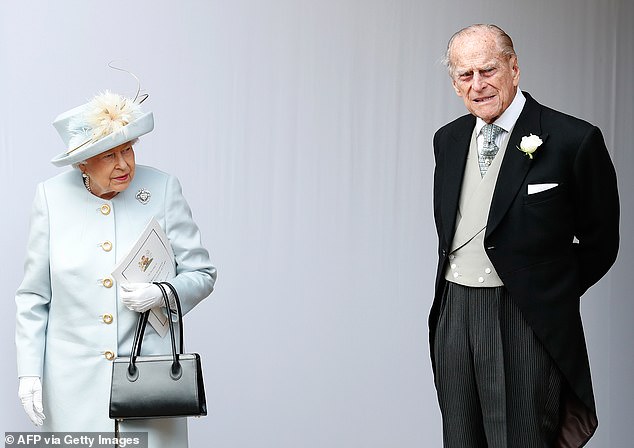 The Queen is marking her birthday with her husband of 72 years, the Duke of Edinburgh (pictured in 2018), at Windsor Castle in Berkshire with a reduced household for their protection

Philip, 98, made his first major public statement on Monday since he retired nearly three years ago, thanking key workers including refuse collectors and postal staff for keeping essential services running during the Covid-19 outbreak.

With the UK in lockdown and thousands dead from the coronavirus outbreak, there will be no birthday gun salutes.

The Queen decided the celebratory display of military firepower would not be ‘appropriate’ at this time.

Usually a 21-gun salute is fired by the King’s Troop Royal Horse Artillery from either Hyde Park or Green Park, followed by a 62-gun salute at the Tower of London by the Honourable Artillery Company.

Royal Mail will use a special postmark to wish Captain Tom a happy birthday, appearing on all stamped mail in the UK beginning next week. 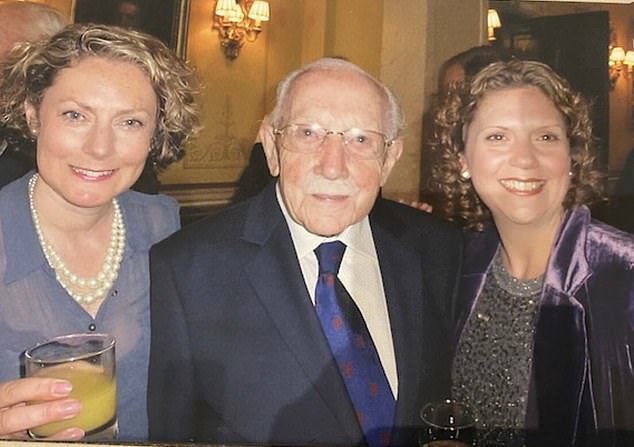 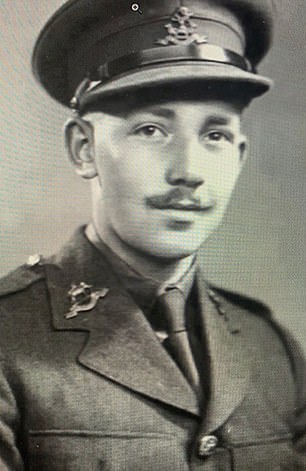 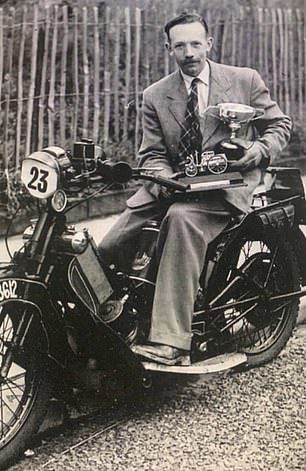 Captain Tom has said plans for his 100th birthday party were affected by the lockdown, but the huge swathes of support the country has voiced for him was ‘a party enough for me’.

Captain Tom Moore yesterday revealed that Dame Vera Lynn sent him a letter after he finished his 100th lap for the NHS.

The 99-year-old received the touching tribute from the sweetheart of the armed forces after he knocked her off the top of the singles charts with his You’ll Never Walk Alone fundraising single.

Captain Tom today said he was ‘rather sorry’ for scooping the top spot and said he was ‘amazed’ to have heard from Dame Vera.

The royal family are, like the rest of the country, staying away from one another as they follow the social distancing rules amid the pandemic. 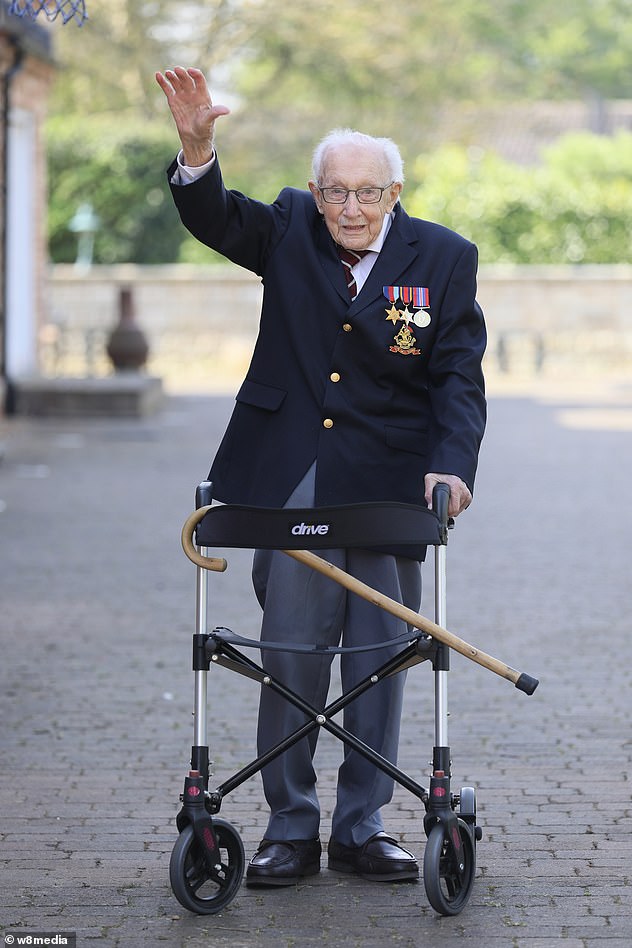 Originally from Keighley in West Yorkshire, Captain Moore trained as a civil engineer before enlisting in the Army for the Second World War, rising to captain and serving in India and Burma

The Prince of Wales, who has recovered from the Covid-19 illness, is at Birkhall in Aberdeenshire, Scotland, with the Duchess of Cornwall, while the Princess Royal, the Duke of York and the Earl of Wessex are all in their own separate homes around the country.

A Buckingham Palace source said the Queen’s birthday will not be marked in any special way, adding that any phone or video calls she has with family will be kept private.

The bells of Westminster Abbey – the church where the monarch was married and crowned – will also stay silent on her birthday for the first time in more than a decade. 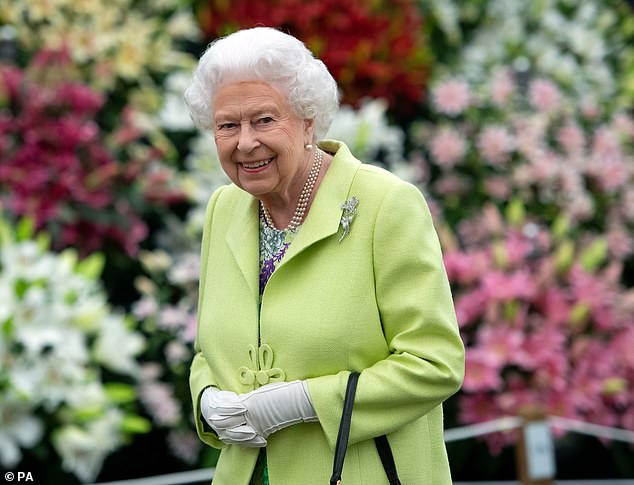 The abbey is currently closed, meaning the celebratory peal which has taken place in her honour on her actual birthday – April 21 – every year since 2007, will not be able to go ahead, the abbey told the PA news agency.

‘We are unable to ring our bells as the church is currently closed. So, it will be a virtual happy birthday this year via the abbey’s social media channels,’ a spokeswoman for the central London church said.

The Queen has two birthdays – the day she was born in April and her official one in June, which is celebrated with the Trooping the Colour ceremony, but this has been cancelled in its traditional form this year.

The Queen – the nation’s longest reigning monarch – has been a source of stability during the crisis.

In a televised address to the nation, she stressed the country will overcome the virus, telling Britons: ‘We will meet again.’

She also delivered what was believed to be her first Easter address, with the resolute message: ‘We know that coronavirus will not overcome us.’

The royal family’s Instagram Stories shared facts and photos about the Queen’s childhood as part of activities for parents who are homeschooling to coincide with the week of her birthday.

She was the first child of the then-Duke and Duchess of York, later King George VI and Queen Elizabeth.

Elizabeth was born by caesarean section at 17 Bruton Street, the Mayfair home of her mother’s parents, the Earl and Countess of Strathmore.

She was never expected to be a monarch when she was born, but the abdication of her uncle Edward VIII in 1936 put her father on the throne, and changed her destiny.

She wed Lieutenant Philip Mountbatten in 1947, and became Queen at the age of 25 when George VI died from lung cancer in 1952.

Elizabeth II, who has been monarch for more than 68 years, is Head of State, the Armed Forces and the Commonwealth.

She is less than two years away from her platinum jubilee of 70 years on the throne.

In her 2019 Christmas message, she acknowledged the ‘bumpy’ path her family, and the country amid Westminster’s bitter Brexit battles, had experienced during the past 12 months.

During 2019, the Sussexes spoke about their struggles living in the public eye, and the Queen’s second son Andrew gave a disastrous television interview about his friendship with convicted sex offender Jeffrey Epstein and stepped down from public duties.

The monarch spent the first weeks of 2020 dealing with the fallout from Megxit – Harry and Meghan’s bombshell decision to quit as senior royals, which ultimately led to them walking away from the monarchy completely in March.

The Queen has witnessed many turbulent times during her reign, but even she confessed of the global Covid-19 pandemic: ‘While we have faced challenges before, this one is different.’

People have started campaigns for Tom to be knighted and Tom said the generosity of people had been amazing.

He said: ‘It’s unbelievable, it’s difficult to imagine, that sort of money that has been coming in from kind people all over the county.

‘To the NHS and back up people and all doctors and services throughout the world, we have got to say well done to all of you because you are putting yourself into danger and doing it cheerfully’.