A sea of cards! Captain Tom is left ‘completely overwhelmed’ as he is sent cards from around the globe on the eve of his 100th birthday after raising more than £29m for the NHS

Captain Tom has been left ‘completely overwhelmed’ after receiving thousands of cards from around the globe to mark his 100th birthday tomorrow.

The inspirational World War II veteran captured hearts after raising more than £29 million for the NHS in the battle against coronavirus by doing laps of his garden in Marston Moretaine, Bedfordshire.

Cpt Tom, 99, set out at the start of this month to raise £1,000 for NHS Communities – but a surge of support saw him smash his target.

After passing his initial goal in less than 24 hours, donations continued to pour in and the total surged to more than £29million.

Cpt Tom was inundated with support and praise after his incredible effort, with people around the world sending him birthday cards ahead of his 100th birthday tomorrow.

It is unclear exactly how many cards he has been sent, though the number passed 120,000 a few days ago, with the cards kept at Bedford School near Cpt Tom’s home.

‘To everyone who has donated, sent birthday cards and messages, sincerely thank you.

Mandy Alison adds to the thousands of birthday cards sent to Captain Tom Moore for his 100th birthday on April 30. They are pictured displayed in the hall of Bedford School 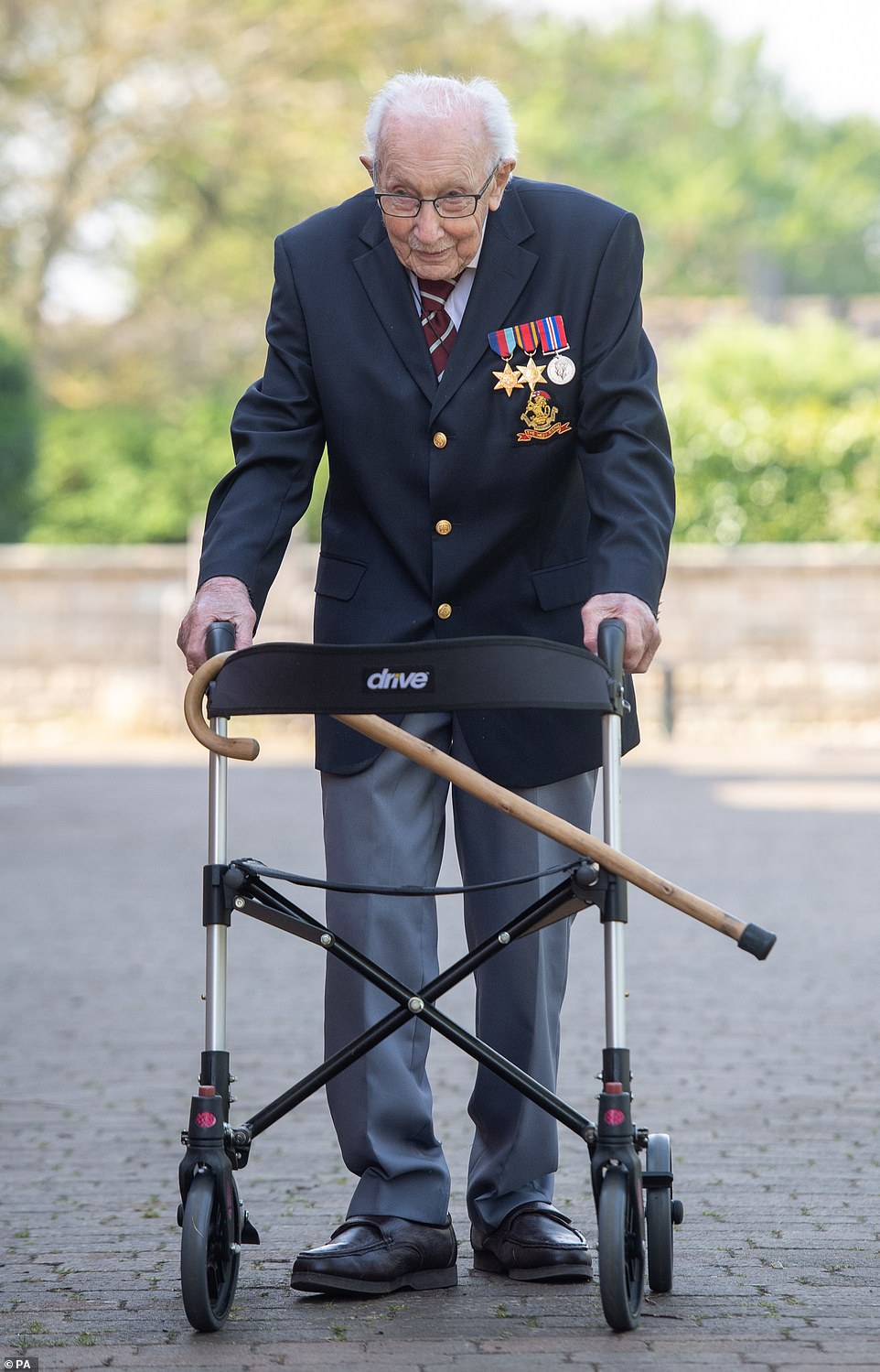 Captain Tom Moore at his home in Marston Moretaine, Bedfordshire, after he achieved his goal of 100 laps of his garden to raise money for the NHS 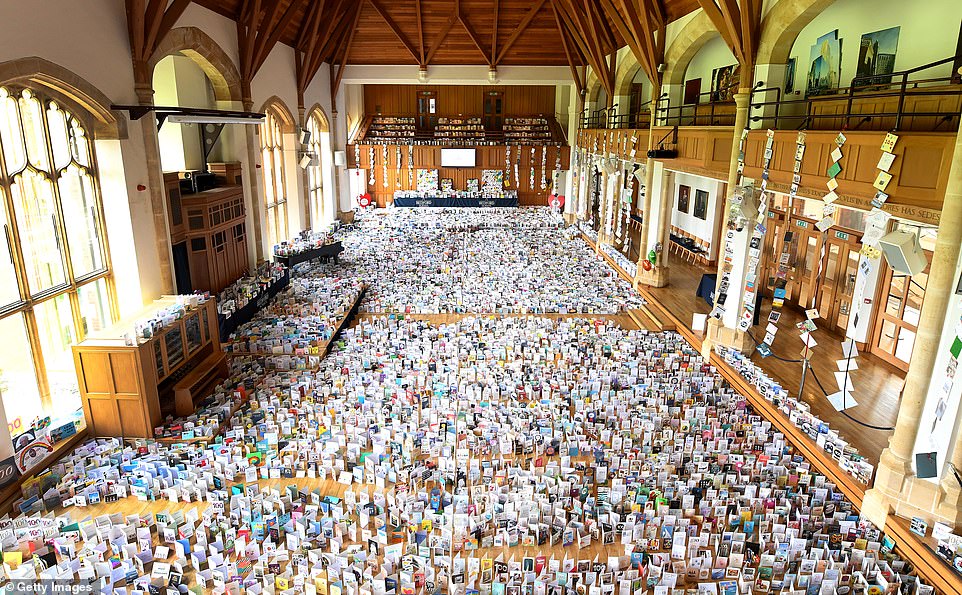 The thousands of cards pictured on display at Bedford School, near Captain Tom’s home to mark his 100th birthday on Thursday

Thanking well-wishers, he added: ‘I am very comfortable and have everything I need. Covid-19 has left so many without, so please donate to those in need. Thank you.’

A family spokesman revealed that the veteran has been left ‘completely overwhelmed’ by the response to his fundraising effort.

A statement said: ‘Captain Tom has been completely overwhelmed by the love he has received.

‘Like many other people during this pandemic, he is not able to spend his birthday with all of his loved ones.

‘Instead Tom is staying at home with his daughter Hannah and her family, who he has been self-isolating with.

‘They will all celebrate privately and will be joined by his daughter Lucy and her family though the use of technology.

‘Captain Tom will not be leaving his house at all and asks all local people, and those following his story, to stay at home and wish him Happy Birthday from afar.’

As well as cards flooding in from all over the globe, Cpt Tom will get a Spitfire flypast to mark his 100th birthday on Thursday.

RAF pilots based at Coningsby in Lincolnshire are expected to soar past the veteran’s home for the incredible display including Spitfires, Hurricanes and Lancasters.

An MOD spokesman said: ‘Weather permitting, aircraft from the RAF Battle of Britain Memorial Flight will complete a flypast to celebrate Captain Tom’s birthday and mark his amazing fundraising achievement.

‘The Great British public is encouraged to follow Captain Tom’s disciplined example and not gather to watch the flypast but continue following PHE guidelines on social distancing.’