Cancer patients should be prescribed exercise classes on the NHS to boost their chances of survival, say experts

Cancer patients should be prescribed exercise classes on the NHS to boost their chances of survival, according to experts.

Cancer patients who do aerobic exercise such as walking, running, swimming or gardening report a better quality of life, less fatigue and reduced anxiety and depression, the study suggests.

Cancer patients should be prescribed exercise classes on the NHS to boost their chances of survival, according to experts (stock image)

A panel of cancer specialists from the American Society of Clinical Oncology (ASCO) evaluated evidence from dozens of trials into the benefits of exercise for cancer patients.

They concluded that doctors should ‘recommend aerobic and resistance exercise during active treatment to mitigate side effects of cancer treatment’, the ASCO conference in Chicago was told.

Patients undergoing surgery for lung cancer should be urged to start an exercise regime as this can halve their risk of complications and reduce hospital stays, they added.

‘The incorporation of exercise during active treatment has clear benefits for patients with cancer,’ their new treatment guideline says. 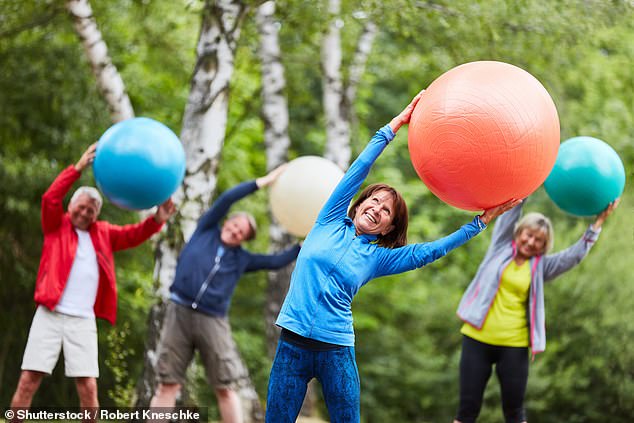 Dr Scherezade Mama, from the University of Texas, lead author of a study on the benefits of group exercise classes in those who have completed cancer treatment, urged NHS bosses make such classes available for cancer patients.

June Davis, an adviser at charity Macmillan Cancer Support, said that despite the benefits of exercise, tailored nutrition and emotional support for cancer patients such holistic care ‘isn’t routinely available and is limited by funding challenges across the NHS’.

She added: ‘The Government’s upcoming ten-year cancer plan is a vital opportunity to prioritise investment in prehabilitation and rehabilitation programmes to ensure people living with cancer get the support they need.’

Patients with advanced lung and ovarian cancer have been given new hope thanks to a treatment that halts tumour growth.

A combination of two drugs can effectively target multiple versions of a ‘Death Star’ cancer protein and in some cases stop tumours growing, according to research.

The KRAS gene, known as the Death Star after the Star Wars space station because its protein has an impenetrable, drug-resistant surface, is one of the most commonly mutated genes in cancer.

But researchers, led by the Institute of Cancer Research, London, and the Royal Marsden NHS Foundation Trust, identified a drug combination that targets the protein and controls tumour growth in some patients with highly advanced, non-small cell lung cancer.

The drug combination – VS-6766 and everolimus – also produced responses in patients with advanced ovarian and thyroid cancers, the Chicago conference heard.