Brittany Lincicome brought 16-month-old daughter Emery to a recent practice round at Aronimink Golf Club and let her run around the course and plop down on mom’s pink golf bag.

Back home with dad, the TV was on for the family to watch Brittany do what she does best, as one of the tour’s bigger hitters regularly found the greens she needed to emerge as a contender for another major victory.

Lincicome and Kelly Tan each shot 3-under 67 on Thursday in windy conditions at challenging Aronimink to share the lead in the KPMG Women’s PGA Championship.

Lincicome was sensational after missing the cut by one shot this past weekend at the ShopRite LPGA Classic.

WATCH | Lincicome, Tan jump out to early lead at Aronimink: 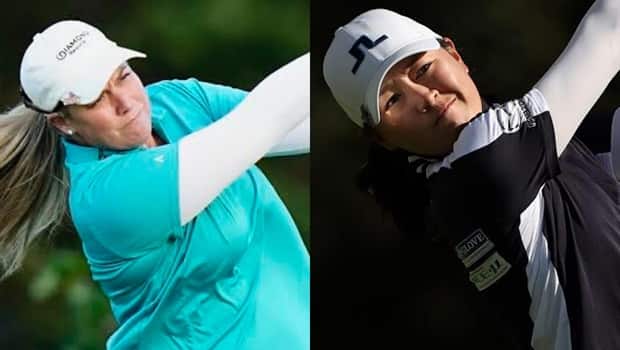 American Brittany Lincicome and Kelly Tan of Malaysia each carded a 3-under 67 to share a one shot lead after the first round of the LPGA’s KPMG Women’s PGA Championship. 0:55

Lincicome, a two-time winner of the major ANA Inspiration eight LPGA Tour victories, played bogey-free to stay even with Tan and keep her first Women’s PGA title in sight.

The 35-year-old Florida player is trying to win for the first since having a baby last July. One of the biggest hitters on the tour, she found her groove at 6,577-yard Aronimink, missing only one green.

“I never tried to swing hard with the driver off the tee today,” she said. “I was just literally, `Get it in the fairway and then worry about the next shot.’ And then on the green, aiming in very specific spots.”

Lincicome said her husband, professional long-driver Dewald Gouws, showed Emery all of her mom’s big hits on TV. Lincicome might even keep playing long enough for her daughter to grow old enough to come watch her play.

“I’s too hard to walk away from,” she said. “When she starts school obviously that will be a little bit more challenging to figure out what we do. But it’s cool just to have her out here and to watch what I do and I think my husband was actually watching TV when I was making some birdies and was showing her. That’s pretty cool.”

Brooke Henderson of Smiths Falls, Ont., and Alena Sharp of Hamilton each shot 1-over 71 for a share of 26th place at the conclusion of Thursday’s opening round. Henderson previously won the tournament in 2016 as an 18-year-old.

WATCH | Henderson, Sharp tied for 26th after opening round at Aronimink: 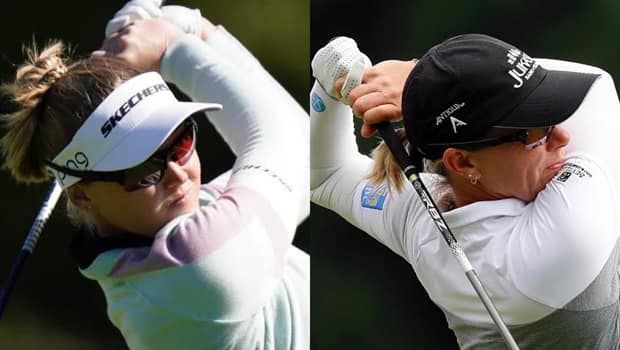 Brooke Henderson of Smiths Falls, Ont., and Alena Sharp of Hamilton each shot a 1-over 71 in the first round of the LPGA’s KPMG Women’s PGA Championship. 0:49

Danielle Kang, Lydia Ko, Gabby Lopez, Carlota Ciganda, Linnea Strom and Cydney Clanton were a stroke back. Lopez and Ciganda tested positive this year for COVID-19, but have rebounded and were in great shape headed into the second day at arduous Aronimink.

One group was unable to finish the round because of darkness.

The 26-year-old Tan, who has never finished better than 30th in any of her previous majors, played bogey-free on the back nine.

Tan has been looking for her breakthrough victory on the LPGA Tour and has played better of late after she failed to make the cut this year at the Women’s British Open. Tan’s previous best finish in a major came in 2016 when she tied for 30th at the Women’s PGA.

“I just feel like I try to tell myself that every day I have a little goal and try to achieve them and build confidence from there,” Tan said. “My ball-striking has been really good, and I think that’s been a key and it’s been giving me a lot of confidence going into the next day.”

First-time major champions — even those not among the top 50 in the world — are becoming common on the tour. Eight of the last nine major champions had never won one before. Tan, from Malaysia, took inspiration from all the recent first-timers in the major championships club.

“Winning golf tournaments out here is life-changing,” she said. “It’s very emotional even when I watched them win. I wish to do that one day.”

Tan emerged late in a championship delayed three months because of the coronavirus pandemic. Golfers contended with a breezy day and leaves scattered throughout Aronimink. Anna Nordqvist playfully tossed a handful of leaves toward her caddie on her way toward shooting a 69.

The 2009 champion, Nordqvist is one of eight Women’s PGA Championship winners in the field that also includes all 11 winners this year on the LPGA tour.

“I know it can blow here, but I didn’t expect it to blow that hard that early,” Nordqvist said, “and it was really cold.”

The absence of fans again made for subtle changes around each hole but about 20 officials, photographers and other assorted credentialed guests socially distanced around the 10th tee to watch defending champion Hannah Green and former tourney champs Kang and Henderson take their first shots of the tournament. When some golfers finished a hole, the only sound was one or two polite golf claps as they headed off to the next one without the need for even the slightest wave of acknowledgement.

Clanton birdied four of her last five holes to make a run at third place, making her one of only 12 players to break par.