A 20 year-old held a goodbye barbecue and now plans to die by assisted suicide after his intestine burst and ruined his health.

Eric Coulan, from Fort St John in British Columbia, held the farewell bash last month will now die on his own terms after a blockage doctors couldn’t diagnose ruptured in 2020 and gave him sepsis.

He is a pale shadow of the bright young mechanic he once was, and has to carry a colostomy bag around with him. Coulan will use Canada’s Medical Assistance in Dying (MAID) law to end his life painlessly by taking drugs administered by a doctor or nurse.

He told CJDC: ‘There’ll be an end to suffering. I suffer all day long. I’ve been in a four walled room for a very long time and I’ve just had enough.’

Coulan spent much of his childhood taking medication for abdominal pain which caused him severe discomfort.

But despite trying seven different hospitals across Canada, doctors were unable to diagnose him, beyond saying he had suffered a blockage.

The issue came to a head two years ago when Coulan became so sick that he had emergency surgery to remove part of his lower intestine. 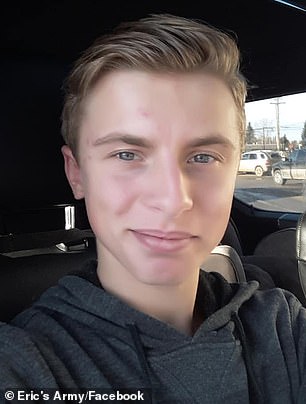 Eric Coulan, pictured left, in May and right, in 2020, wants to end his own life using Canada’s assisted dying law because of an abdominal condition that almost killed him and which has ruined his quality of life 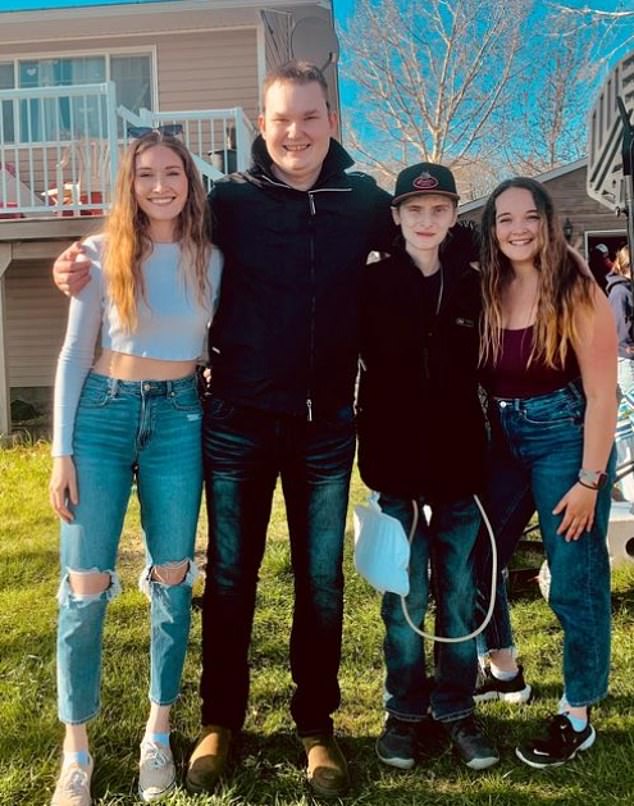 Coulan is pictured at his farewell party in May. He doesn’t know when he’ll end his own life, but decided to do so after being told he’d need six organs transplanted to survive – and that even then, he’d only have a 50 per cent chance of recovery

Participants must be over 18 and live in Canada. They must be suffering from a grievous and irremediable medical condition which is severe and cannot be reversed.

People do not need to be terminally ill to apply to use the MAID law, but those suffering from mental illnesses are ineligible.

Patients must give informed consent of their decision, and it must be independently witnessed.

An application for MAID can be withdrawn at any time.

Patients must give ‘final consent’ just before they’re given drugs that will them by a doctor or nurse.

It ruptured, sending Coulan into septic shock and a coma.

He recalled: ‘I went in to emergency and got a bed right away and that night (it) ruptured and (I) got put in a coma for I can’t remember how long.’

After coming around, Coulan was told the only hope of a possible recovery was to have six organ transplants – which medics claimed had never been attempted before.

Even then, doctors warned there was only a 50 per cent chance of recovery, Coulan said. They have not been able to give him a prognosis for how long he might survive in his current condition, but Coulan said life is too painful to endure.

He has lost a considerable amount of weight, struggles to speak and is a shadow of the healthy teenager he was two years ago.

He held a farewell barbecue on May 22, but has yet to decide when he’ll kill himself

He use Canada’s Medical Assistance in Dying (MAID) law to end his life.

MAID is available to adults with a ‘grievous and irredeemable medical condition,’ who have voluntarily decided they wish to die.

It sees them injected with a drug that causes a painless death, or prescribed a drug to take orally that will also kill them. 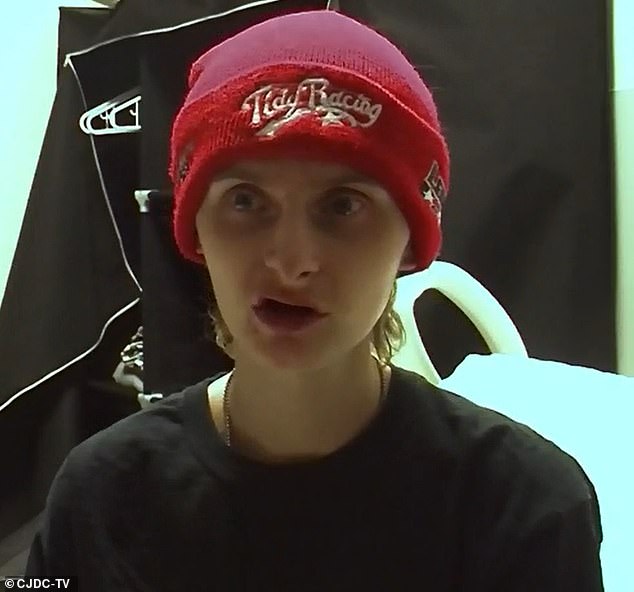 Eric Coulan, has endured debilitating pain since he was diagnosed with abdominal issues when he was a youngster. An endoscopy revealed blockage but doctors were unable to pinpoint the problem. 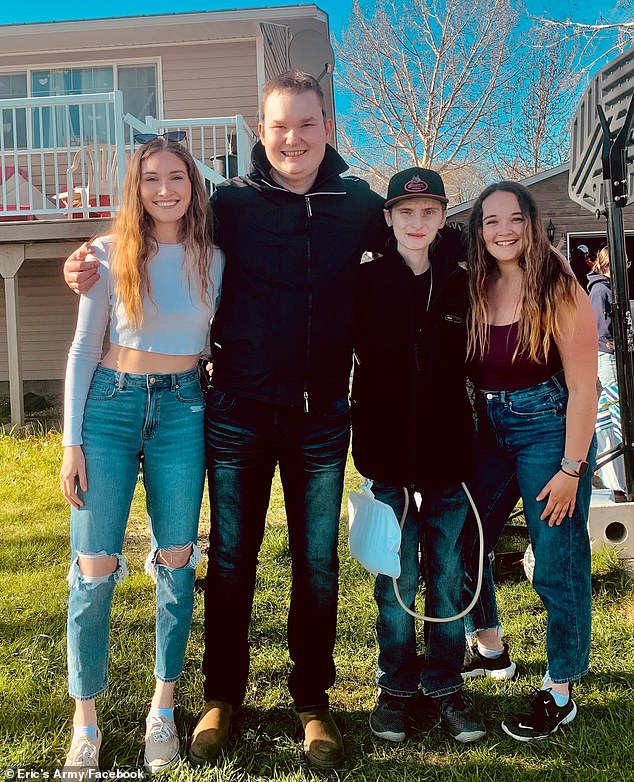 Coulan said he and his dad were planning a bonfire with a few people, but six-hundred people showed giving him a king’s send off 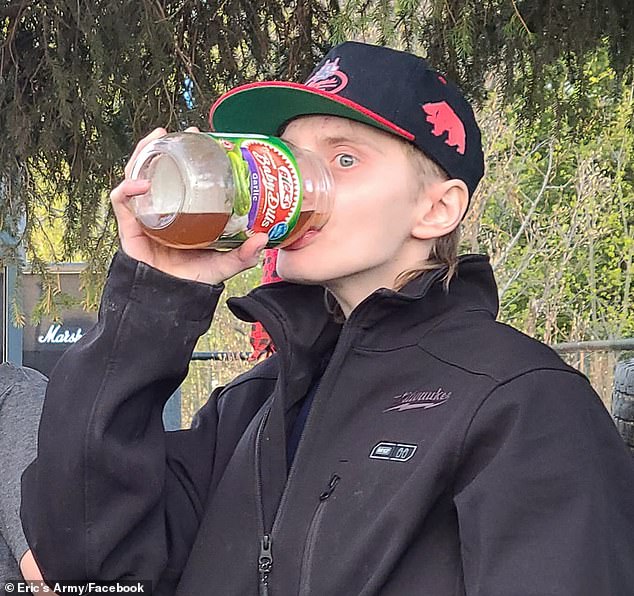 Coulan is pictured at his farewell party in May. He says his family have been supportive of his decision to kill himself

The once vibrant young man, who worked as a mechanic, and enjoyed snowboarding and water sports with friends, spending time with his girlfriend, and being outdoors with his dogs, normally the best years of a young person’s life, had already been faced with little quality of life.

Coulan days were spent lying in a hospital room hooked up to machinery and dealing with agonizing pain he decided ‘it was time.’

The law, introduced in 2016, and further amended by the Canadian government in March 2021, enabling a broader group of people to be be eligible and receive medically assisted suicide.

Speaking to CJBC, Coulan added that he ‘wasn’t in a good place,’ and ghosted his family while he was contemplating his end of life journey.

When he did share his decision with everyone, he said he received an overwhelming amount support.

A Facebook group, Eric’s Army was created, where he received countless message of love and support. Many were inspired by his courage.

Coulan said he and his dad were planning a bonfire with a few people, but six-hundred people showed giving him a king’s send off.