Canadian man, 76, charged after attempting to smuggle $22m worth of meth in shoeboxes through one of Australia’s biggest airports

A 76-year-old Canadian man allegedly tried to smuggle more than $22 million worth of crystal meth hidden in shoeboxes through Melbourne Airport – telling border officials it was just salt.

The drug haul was discovered by Australian Border Force officers when they searched the Canadian national’s luggage after he arrived on a flight from Los Angeles on Wednesday morning.

Australian Federal Police said the elderly man claimed the substance was salt, but when officers ran a test it returned a positive result for methamphetamine.

The drugs weighed about 24 kilograms, the equivalent of about 240,000 street deals worth $22.3 million, the AFP said.

Authorities charged the man with importing a commercial quantity of a border-controlled drug, namely methamphetamine – the maximum sentence for which is life in prison.

He faced Melbourne Magistrates Court and was remanded in custody, and is due back in court on September 1.

AFP Detective Inspector Chris Salmon said further arrests could be made in relation to the seizure, noting there was ‘often an organised criminal syndicate operating behind such drug importations’.

Detective Inspector Salmon said further investigations into the origins of the meth were continuing. 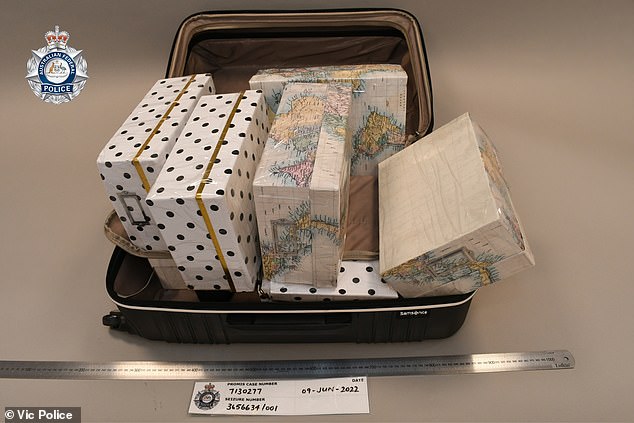 The man allegedly carried the meth rocks in a shoebox, and then claimed the 24 kilograms of the drug was salt

‘It is rare that one individual can organise the purchase, importation and distribution of such a large quantity of illicit drugs; there is often an organised criminal syndicate operating behind such drug importations,’ Detective Inspector Salmon said.

‘Criminals will try to hide illicit drugs in a variety of ways, however our well-trained officers have many detection methods at their disposal,’ Acting Supt Lupton said.

‘No matter how those drugs are hidden, our officers have the technology and expertise to find them.

‘Ice destroys communities and tears families apart. This is a significant seizure and I hope this sends a strong message to those attempting to bring illicit drugs into the country: we will find you and you will be prosecuted,’ she said.