A left hip and hamstring issue that took a while to settle after the recent NACAC cross-country championships probably would have been a bigger concern for Jessica O’Connell just a few years ago.

But the Canadian runner’s changed approach to training — designed to lessen the frequency of injury — plus the addition of strength coach Kyla Coates and physiotherapist Tyson Plesuk has led to greater success.

“A key to becoming more speedy, in addition to longer, more aerobic workouts, has been a huge amount of time invested in becoming a stronger, more robust athlete,” O’Connell said during preparations for her first world cross-country championships this Saturday in Aarhus, Denmark, which will be live streamed at CBCSports.ca at 5:45 a.m. ET.

“Over the past few years, we’ve been working to address my weak glutes and pitiful mobility, which has made me quite a bit more powerful, efficient and durable.”

Since the spring of 2015, the Canadian runner has experienced a variety of ailments:

“It’s always something with me,” she said, laughing. “I think I’ve been in good shape before but I haven’t been able to show it because there hasn’t been a race where I haven’t ended up hurt.”

O’Connell, 30, didn’t return to full-time training until late last year following the Achilles injury. But after one workout, she committed to the women’s indoor 3,000 metres on Feb. 9 at the Millrose Games in New York, where she set the Canadian record in eight minutes, 46.50 seconds.

She then helped Canada’s senior women to a silver medal, finishing second to Breanna Sieracki of the United States at the NACAC event in Trinidad and Tobago on Feb. 16.

“Running those good 3Ks gives me hope and confidence I’ll be able to put out a good 5K this summer,” said O’Connell, who will focus on the 5,000 metres during the track season in hopes of meeting the qualifying standard of 15:22 for the world track and field championships in September. 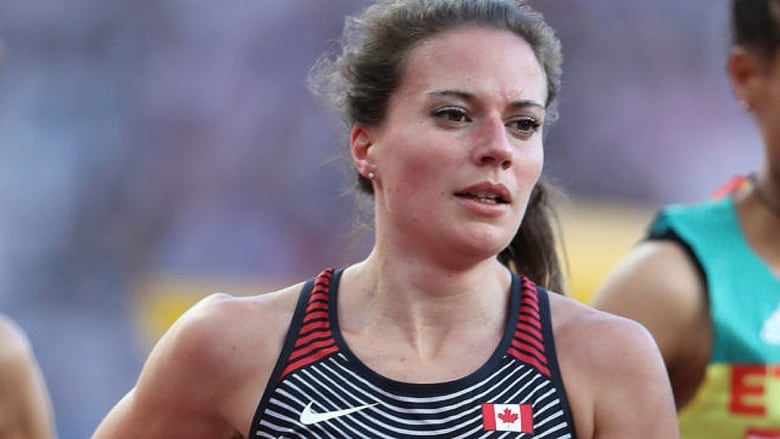 Shortly after this weekend’s world cross-country championships, O’Connell’s goal will be qualifying for the women’s 5,000 metres at the world track and field championships in September. (Submitted by Athletics Canada/File)

Last June, the Calgarian ran 15:18.36 at the Portland Track Festival but the one-year qualifying window didn’t open until Sept. 7.

‘Biggest challenge will be the unknown’

“I find it very difficult, I’m a very timid runner,” said O’Connell of running in mud. “I’ve been doing strides on the grass and seeking out surfaces with adverse footing, in a safe way, to make [my stride] more efficient and become more confident.

“Braving the conditions — Saturday’s forecast calls for a temperature of about 12C with 30 km/h winds — and trying to stay focused and in the moment will be challenging. The biggest challenge will be the unknown. The East Africans are so strong and I don’t know what it’s like to race them in cross-country rather than a track race.”

Besides the competition, O’Connell will attempt to negotiate man-made mud, sand and water pits in her five laps on the 2-km loop course. 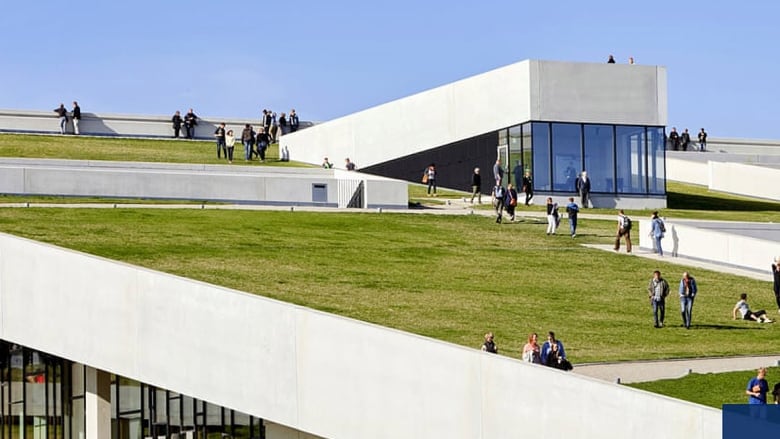 The Moesgaard Museum, with its sloping green roof (at a 10 per cent incline), is part of Saturday’s 2 km loop course at the world cross-country championships in Aarhus, Denmark. (Getty Images/File)

“We run [up the grassy slope] on the roof of [the bunker-like Moesgaard Museum], through a party tent and there’s a corner called the ‘Viking gauntlet.’ I’m shuddering thinking about it,” O’Connell said.

The Viking Zone is one of half a dozen features that set the race apart from recent world cross-country events while the Runner’s Valhalla — a 50×20-metre tent and cheering zone that will feature a DJ — is where fans are encouraged to drink beer and get close to the athletes.

A local group of 30 actors hired earlier this year by Jakob Larsen, director of the Danish Athletic Federation, will have their own miniature village on the course, complete with bonfires and fake weapons.

“When people run through it, they will know that they’re in Viking territory,” Larsen told LetsRun.com earlier this month.

International Association of Athletics Federations president Sebastian Coe is so excited about the setup that he plans to take part in a 4x2km relay that is just one of several events open to the public on race day.

This <a href=”https://twitter.com/Aarhus2019?ref_src=twsrc%5Etfw”>@Aarhus2019</a> course design and spectator involvement is EPIC! Can’t wait to compete against the world’s best XC runners on Saturday.

For about $200, any man who has broken 33 minutes or woman who has run under 37 minutes over 10K within the last 12 months can sign up to run alongside the pros in the championship race, but their times won’t count in the individual or team scoring.

O’Connell is hoping to draw from the experience of teammates Gen Lalonde and Natasha Wodak. Lalonde won the senior women’s race at cross-country nationals in November while Wodak is the Canadian-record holder in the 10,000.

Over 580 runners from 67 countries will compete Saturday. Men’s and women’s races will be contested in the under-20 and senior divisions along with a mixed 4x2km relay.

Winners of the individual men’s and women’s races will earn $30,000 US, with money paid to the top six finishers in the individual and team events. The top four mixed relay teams will receive money, with the winner handed $12,000.