Canada has vowed to become the second country in the world to make Facebook pay for news as the global backlash against the company continues.

Facebook blocked all Australian news content on its service over proposed legislation requiring it and Google to pay fees to Australian publishers for news links.

Canadian Heritage Minister Steven Guilbeault, in charge of crafting similar legislation to be unveiled in coming months, condemned Facebook’s action and said it would not deter the country.

He said: ‘Canada is at the forefront of this battle. We are really among the first group of countries around the world that are doing this.

Canada has vowed to become the second country in the world to make Facebook pay for news as the global backlash against the company continues. Pictured: Facebook CEO Mark Zuckerberg testifies before a House Financial Services Committee hearing on Capitol Hill in Washington in 2019

‘I suspect that soon we will have five, ten, 15 countries adopting similar rules. Is Facebook going to cut ties with Germany, with France?

They said the Australian approach would permit publishers to recover C$620million (£351million) a year.

Without action, they warned, Canada would lose 700 print journalism jobs out of 3,100 total.

Guilbeault said Canada could adopt the Australian model, which requires Facebook and Google to reach deals to pay news outlets whose links drive activity on their services, or agree on a price through binding arbitration. 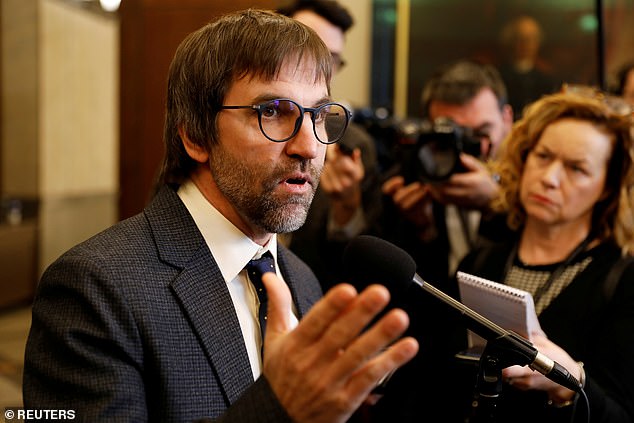 Another option is to follow the example of France, which requires large tech platforms to open talks with publishers seeking remuneration for use of news content.

‘We are working to see which model would be the most appropriate,’ he said, adding he spoke last week to his French, Australian, German and Finnish counterparts about working together on ensuring fair compensation for web content.

‘I suspect that soon we will have five, 10, 15 countries adopting similar rules … is Facebook going to cut ties with Germany, with France?’ he asked, saying that at some point Facebook’s approach would become ‘totally unsustainable’.

University of Toronto professor Megan Boler, who specializes in social media, said the Facebook action marked a turning point which would require a common international approach.

‘We could actually see a coalition, a united front against this monopoly, which could be very powerful,’ she said in a phone interview.

This week, Facebook said news makes up less than 4% of content people see on the platform but contended that it helped Australian publishers generate about AU $407 million last year.

Google has signed 500 deals worth around $1 billion over three years with publishers around the world for its new News Showcase service and is in talks with Canadian companies.

Guilbeault said Google would still be subject to the new Canadian new law, since Ottawa wanted an approach that was fair, transparent and predictable.

He said: ‘What’s to say that Google – tomorrow, six months, a year from now – doesn’t change its mind and says it doesn’t want to do that any more?’

Lauren Skelly, a spokeswoman for Google in Canada, declined to comment on Guilbeault’s remarks, saying the company did not know details of the legislation.

Michael Geist, Canada Research Chair in Internet and e-commerce Law at the University of Ottawa, said Canada should aspire to Google’s approach, where companies put money into content that provided added value.

‘If we follow the Australian model … we’ll find ourself in much the same spot,’ he said by phone. ‘Everybody loses. The media organisations lose … Facebook loses.’

Kevin Chan, head of public policy for Facebook in Canada, said there were ‘other options to support news in Canada that will more fairly benefit publishers of all sizes’.

What does Australia’s draft code say?

This imbalance has resulted in news media businesses accepting less favourable terms for the inclusion of news on digital platform services than they would otherwise agree to.

The draft code would allow news media businesses to bargain individually or collectively with Google and Facebook over payment for the inclusion of news on their services.

The code also includes a set of ‘minimum standards’ for: