The bill, dubbed the Prohibition on the Purchase of Residential Property by Non-Canadians Act, seeks to quell the country’s housing crisis by prohibiting all outsiders – particularly investors – from purchasing property throughout its 10 provinces.

Passed by Parliament in June, the guidance is a cornerstone of Trudeau’s proposal to cool speculation that saw average home prices swell to an eye-watering $800,000 after the pandemic. The country’s housing market has since yet to recover, due to issues including limited supply and opportunistic investors.

As a result, frenzied bidding wars are now commonplace, with an increasing amount Canadians finding themselves displaced by historic home highs – which are up 38 percent from just three years ago. 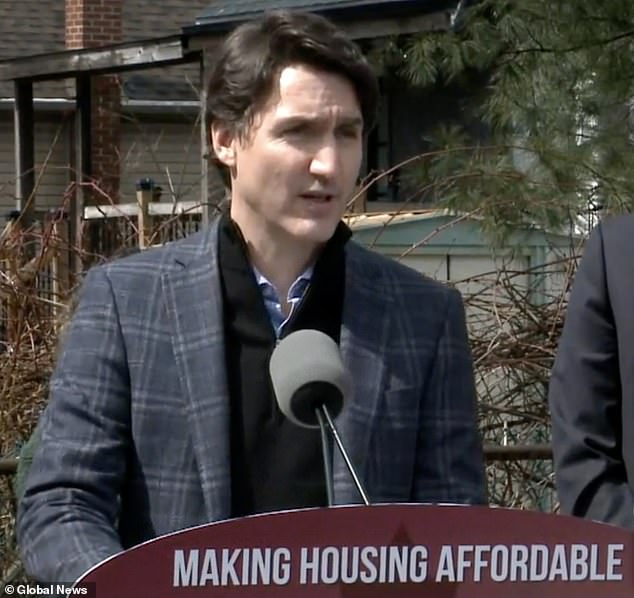 The bill, dubbed the Prohibition on the Purchase of Residential Property by Non-Canadians Act, as part of Prime Minister Justin Trudeau’s plan to address rapidly inflating housing prices

In a press release touting the law – which is only a temporary two-year measure – Housing Minister Ahmed Hussein reiterated how he and other Canadian officials stood behind the law.

‘Through this legislation,’ Hussein said late last month ahead of the bill’s passing.

He added: ‘We’re taking action to ensure that housing is owned by Canadians, for the benefit of everyone who lives in this country.’

The campaign website for Trudeau’s party offered a similar statement regarding the guidance, while also outlining the reasons for recent volatility in the housing market.

‘The desirability of Canadian homes is attracting profiteers, wealthy corporations, and foreign investors,’ the Liberal Party of Canada wrote ahead of the law’s coming into effect on Sunday.

‘This is leading to a real problem of underused and vacant housing, rampant speculation, and skyrocketing prices. Homes are for people, not investors.’ 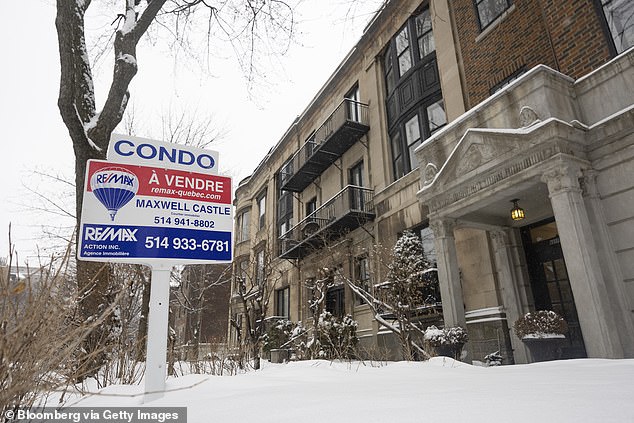 Trudeau echoed those sentiment back in April at an event touting his signing of the bill earlier in the month, as part of the country’s budget proposal for the year.

During his speech, the 51-year-old prime minister – who narrowly won his third bid for the position in September – stated that the law was pushed through Parliament ‘to make life more affordable for Canadians and grow our economy.’

Instead of properties, the progressive – who came under fire for strict lockdown measures during the Covi-19 pandemic that saw several small businesses go out of business –  stated that the newly penned plan ‘invests in people.’

‘Making life more affordable for Canadians… has to start with addressing housing affordability,’ Trudeau said of the $8.9million budget, which months before was delayed by Conservatives fearing it would cause the country further economic uncertainty.

‘It’s a big issue for a lot of Canadians and it’s a big issue to solve,’ the liberal leader went on, speaking to citizens in front of podium adorned with the phrase, ‘Make Housing Affordable.’ 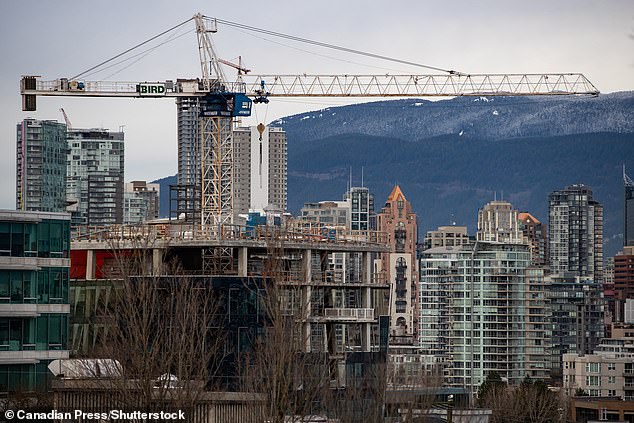 A construction crane sits idle in Vancouver at the site of an office tower under construction last year. The Canada Mortgage and Housing Corporation reported that 3.5 million more homes would need to be built by 2030 to achieve affordability for all Canadians

‘There’s no one silver bullet that’s going to solve everything. That’s why our plan has three key pillars,’ Trudeau said, before detailing what his party hopes to achieve with the new guidance.

‘The first is helping people save to buy a home; the second is focusing on housing supply, to make sure we’re creating more homes across the country; and the third is putting an end to the speculation that is driving up housing prices unnecessarily,’ he said.

The three-time prime minister singled out Ontario’s Hamilton in particular, which, like countless cities across the country, has seen home prices surge.

The port city – located less than a two hour’s drive across the border to Buffalo – has seen property costs surge 16.8 percent in two years, with the average price of homes now standing at $761,244, even after falling 8.9 percent in 2022.

Addressing the crowd, Trudeau conceded that this phenomenon was occurring ‘frankly, across the country,’ leaving average Canadians in the lurch while investors who bought properties before or in the early stages of the pandemic turn a profit.

‘Canada needs more affordable housing,’ Trudeau said at the time. ‘When Canadians work hard and save, they should be able to afford a home. 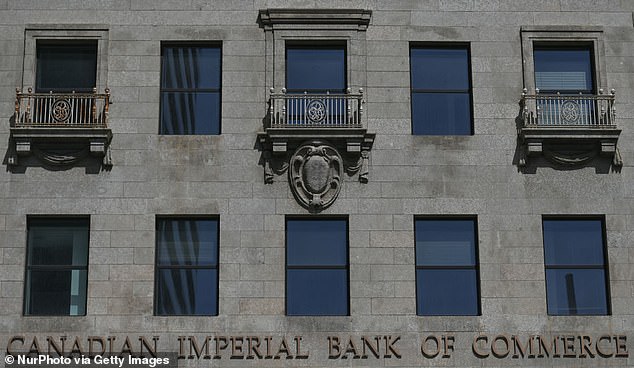 That said, the new guidance – which comes as The Bank of Canada, like the Federal Reserve, has frantically hiked interest rates to address rampant inflation – states that properties not located within metropolitan hubs will not be subject to the ban

‘Homes are to live in. To raise a family and to build a life in.’ he added, ‘Not a way to boost a balance sheet.’

He slammed the often deep pocketed investors – who often hail from countries like the US and the UK – as part of the problem.

‘For far too many families, the dream of homeownership in today’s market is simply out of reach. But that needs to change.

‘Young Canadians deserve the opportunity to build a future in a home of their own, just as their parents were able to do before them.’

He added that ‘all Canadians deserve to have an affordable home,’ and that the then recently approved budget, which includes the recently passed law, gives us the tools to make a difference.’

That said, the new guidance – which comes as The Bank of Canada, like the Federal Reserve, has frantically hiked interest rates to address rampant inflation – states that properties not located within metropolitan hubs in places like Vancouver, Ontario, and Toronto will not be subject to the ban.

Prohibition on the Purchase of Residential Property by Non-Canadians Act

The bill – which was passed on June 23 and will only last two years – prohibits non-Canadian from purchasing, directly or indirectly, any residential property in the country, with the following exceptions:

(c) an individual who is a non-Canadian and who purchases residential property in Canada with their spouse or common-law partner if the spouse or common law-partner is a Canadian citizen, person registered as an Indian under the Indian Act, permanent resident or person referred to in paragraph (a) or (b)

The law also does not apply if a non-Canadian becomes liable or assumes liability under an agreement of purchase and sale of the residential property before the day on which this Act comes into force.

Properties not located within metropolitan hubs in places like Vancouver, Ontario, and Toronto will also not be subject to the ban.

Over the past two years, major markets in those cities – in an effort to deter investors from snapping up properties instead of struggling Canadians – have introduced taxes on non-residents and empty homes.

Meanwhile, as homes remain largely unaffordable for the average citizen, countless construction projects in those locales sit sidelined due to diminished demand.

The Canada Mortgage and Housing Corporation reported that 3.5 million more homes would need to be built by 2030 to achieve affordability for all Canadians.

Realtors in the country, however, have expressed skepticism about the law – which provides exemptions for people who intend to move to Canada – saying its drawbacks far outweigh any prospective benefits.

‘Canada has built a reputation as a multicultural nation that welcomes people from around the world,’ the Canadian Real Estate Association said in statement.

‘As currently proposed, the prohibition on the purchase of residential property by non-Canadians can impact our reputation as a welcoming nation.

‘The potential benefits of the ban are likely to be modest,’ the group added.

According to recent data provided Canadian Real Estate Association – even after some respite seen this year, the country’s average price index is still up nearly 40 percent from the end of 2019, before the pandemic.

Other experts have echoed the association’s stance that the ban on foreign buyers – who account for less than 5 percent of home ownership in Canada – would not have the desired effect of making homes more affordable.

Inventory of homes for sale, meanwhile, are now back to pre-pandemic levels.