EXPRESS INFORMER > News & Politics > Can YOU spot what’s odd about this buffet?: ALL of this food is more than 12 months old

Piled high with pizza, bulging with burgers and fit to burst with doughnuts, sweets and crisps, it sounds like a fast-food fantasy.

Yet the cupboard in Leyla Kandemir’s kitchen is anything but appetising.

For every single item in her collection — fondly dubbed ‘Mum’s Museum’ by her two children and husband Murat — is at least 12 months old.

Comprising burgers and chips from McDonald’s, Greggs sausage rolls, Domino’s pizza, and pastries, bread and buns from her local Tesco, some of these ‘Frankenfoods’ date back to April 2019 and are part of a groundbreaking experiment.

Not only do they look like they have failed to decay, despite being stored in a simple kitchen cupboard, they all appear almost identical to the day she bought them.

Leyla, 53, a psychotherapist and nutritionist from Colchester, Essex, uses her collection to show clients the dangers of eating ultra-processed foods pumped full of so much salt, sugar, chemicals and preservatives that they never go off.

Last week her work went viral after her daughter Elif, 21, uploaded a video of the cupboard to social media platform TikTok, where it has now been viewed more than four million times.

Pictured: The various food stored by Leyla Kandemir, who uses her collection to show clients the dangers of eating ultra-processed foods pumped full of so much salt, sugar, chemicals and preservatives that they never go off

‘My family thought I was mad, keeping all this stuff,’ says Leyla. ‘Initially, the kids were disgusted by it, and my friends were quite shocked. Even I’ve been astonished by how long it’s all lasted.’

Most ultra-processed foodstuffs are preserved by very high levels of sugar and salt, as well as cooking processes that involve extracting water, which makes them less prone to rot.

Some food in Leyla’s cupboard — such as biscuits, whose main component is glucose-fructose syrup — also have preservative ingredients designed to extend their shelf life, some of which can have ill effects on our health, causing upset stomachs, irritating the eyes, and aggravating sensitive skin.

Leyla re-trained as a consultant for the weight-loss industry after leaving teaching in 2012.

‘I was bulimic in my late 20s and early 30s, so diet and portion control has always interested me,’ she says. ‘As my work went on, I noticed a connection between over-eating, emotional eating and psychological problems.’

She enrolled in a psychotherapy degree at the Open University in 2016, followed by a series of qualifications in nutrition. 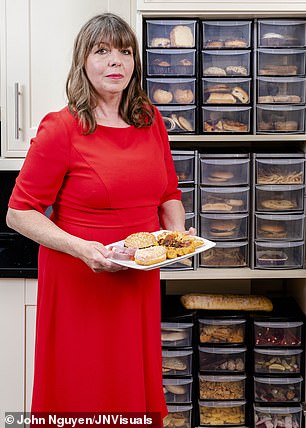 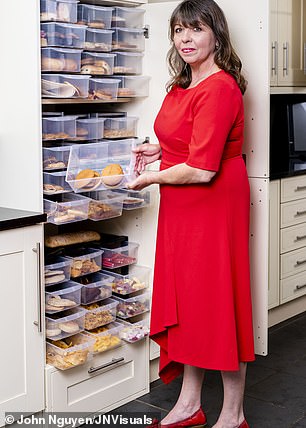 Pictured: Nutritionist Leyla Kandemir and her food cupboard of processed food that she keeps to show clients the dangers of eating ultra-processed foods

‘We’re Turkish so we tend to have a healthy, Mediterranean diet,’ Leyla says. ‘We never have biscuits in the house and my children don’t eat cereal. But we indulge in pizza or a takeaway from time to time.’

Her unorthodox experiment started in April 2019 when she was cleaning her son’s bedroom and found the remnants of a three-day-old pizza under his bed. ‘I couldn’t believe it hadn’t gone off over the weekend, so I decided to keep a few slices and see what would happen,’ she says.

‘A month later, it still looked exactly the same. Nothing had gone mouldy, not even the cheese or meats on top.’

In August that year, Leyla expanded her experiment, stocking up on as many takeaway meals as she could carry.

She emptied a floor-to-ceiling cupboard in the kitchen, fitted it with sliding Tupperware drawers and filled them with the cooked burgers, chips and chicken nuggets. Before storing each item away, she unwrapped it and let it cool to room temperature.

This time last year, as she learned more about processed supermarket foods, Leyla added a stash of breads, pastries, doughnuts, crisps, biscuits and sweets. Twelve months on, not one shows any sign of decay. 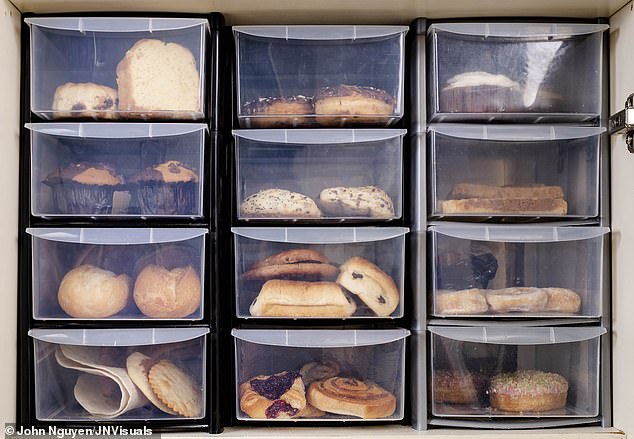 Comprising burgers and chips from McDonald’s, Greggs sausage rolls, Domino’s pizza, and pastries, bread and buns from her local Tesco, some of these ‘Frankenfoods’ date back to April 2019 and are part of a groundbreaking experiment 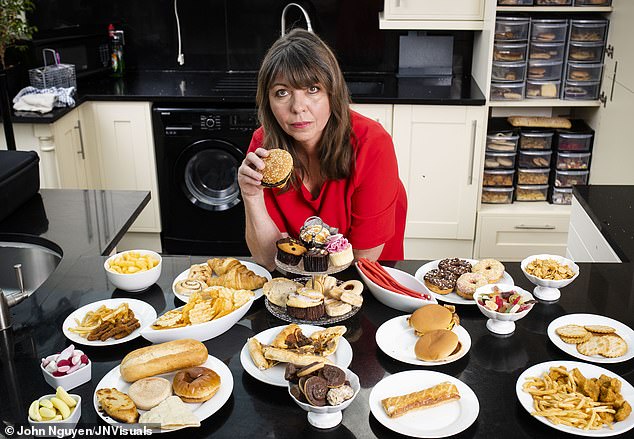 Last week, Leyla’s work went viral after her daughter Elif, 21, uploaded a video of the cupboard to social media platform TikTok, where it has now been viewed more than four million times

The foods are taken out and decanted on to plates once or twice a week to show Leyla’s clients, before being carefully put away in their allocated drawers. Astonishingly, the cupboard — in the family kitchen — doesn’t smell.

Almost everything Leyla has collected has remained intact, with the exception of some custard-filled doughnuts, a loaf of organic bread and KFC chicken pieces, all of which did rot after a couple of days.

Her plan is to keep the rest ‘for ever’. ‘I want to go into schools and educate children about the dangers of processed meals like these,’ she says. ‘It’s not real food. And yet for a big chunk of the British population, it makes up 80 per cent of their diet.’

Experts are increasingly convinced that ultra-processed foods like these can be linked to food addiction, hormonal shifts and fundamental changes to the make-up of our brains.

Dr Primrose Freestone, associate professor in clinical microbiology at Leicester University, is not surprised by the ‘natural mummification’ of Leyla’s food. 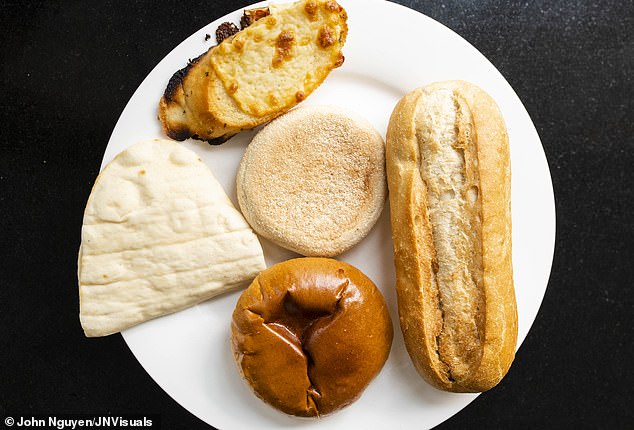 Pictured: A plate with a selection of the food stored by nutritionist Leyla Kandemir. Most ultra-processed foodstuffs are preserved by very high levels of sugar and salt, as well as cooking processes that involve extracting water, which makes them less prone to rot

‘The high salt and sugar content, fat levels and low water levels all act as preservatives,’ she says. ‘Plus the plastic boxes would exclude both air and decomposing airborne fungi and bacteria.

‘Just because there is no green mould does not mean that microbial decomposition, combined with chemical changes, is not occurring — or that the food is safe to eat. Invisible levels of bacteria can make you very sick.’

Professor Gunter Kuhnle, of Reading University, agrees. ‘They’re probably stale and possibly rancid. It’s more difficult to say whether they’re safe to consume. Some might be but, personally, I wouldn’t try.’

The Mail conducted a series of experiments on Leyla’s food. The results are guaranteed to put you off your lunch . . . 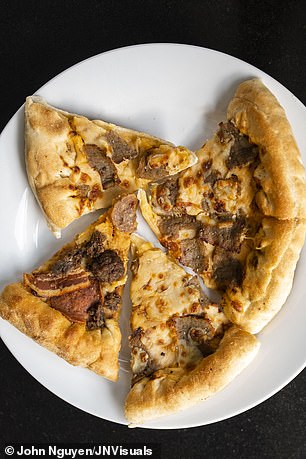 LOOKS: Remarkably edible. Dried out but still looks like a slice of pizza you’d happily tuck into after a night out.

SMELLS: Stale but meaty. Bacon has a salty whiff but sausage pieces smell acidic and rancid.

FEELS: The crust is rock-solid, while the toppings are squidgy.

BACTERIA COUNT: I tested all the foods by placing a small sample of each in test tubes containing chemicals that react to the presence of E.coli bacteria by changing colour.

This showed that the pizza had a low count (0.5 CFU) of E.coli, which in greater quantities can cause severe abdominal cramps, vomiting and diarrhoea.

MANUFACTURER SAYS: Domino’s did not respond to requests for comment.

VERDICT: As the oldest item in Leyla’s collection, this is a definite no-no. Overall it’s very off-putting.

LOOKS: While the coating is golden brown, the chicken inside has turned grey and shrivelled to a fraction of its former size.

SMELLS: Spicy and salty, like it’s been drenched in artificial seasoning.

FEELS: So solid I almost break the knife when trying to cut some off. 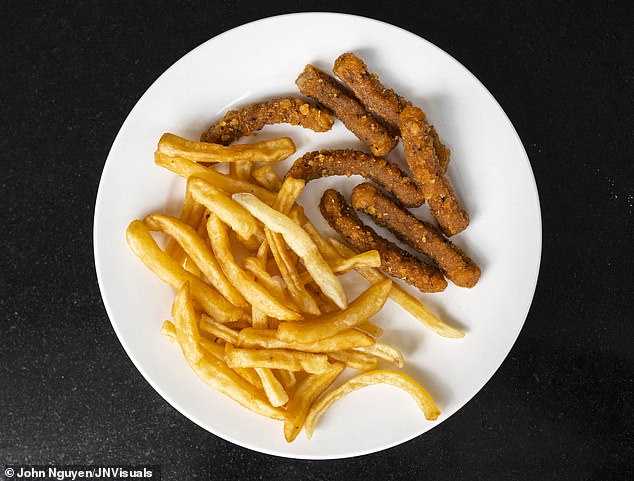 BACTERIA COUNT: High (1.5 CFU). This showed the highest bacteria count of the lot, with plenty of E.coli lurking — a clear indicator that they have gone off.

MANUFACTURER SAYS: Burger King did not respond to requests for comment.

VERDICT: Distinctly unappealing —and potentially toxic. There wasn’t much chicken in these stringy ‘fries’ to begin with, but all semblance of meat has gone after two years of mummification.

LOOKS: They’ve held their shape and colour but look deflated, as if the potato has started to disintegrate.

FEELS: Incredibly oily. Leyla says she regularly has to decant the fat that continues to seep from the chips, and my fingers are coated in oil when I pick up a handful. 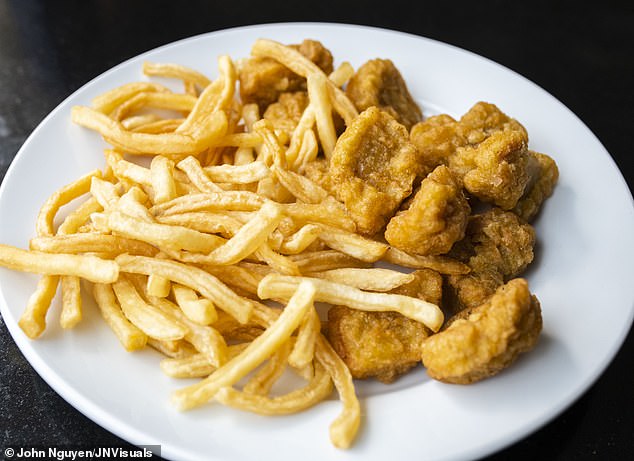 BACTERIA COUNT: Medium (1 CFU). There’s no meat or dairy, so I wouldn’t expect bacteria to fester on these chips, but there’s still a significant amount.

MANUFACTURER SAYS: In its only comment on the subject to date, McDonald’s says: ‘In the right environment, our burgers, like most other foods, could decompose.

‘But, in order to decompose, you need certain conditions — specifically moisture. Without sufficient moisture, bacteria and mould may not grow and therefore decomposition is unlikely.’

VERDICT: They might not make me sick, but these chips — high in fat, salt and sugar — are a prime example of why fast foods don’t decay. Yuck!

LOOKS: The icing and sprinkles have gone soggy and are melting into one another, but kept their luminous colour. The doughnut underneath looks fresh.

SMELLS: Nauseatingly sweet. But it probably smelled very similar when it was purchased.

FEELS: The dough is hard and crumbly, while the glaze on top is tacky. 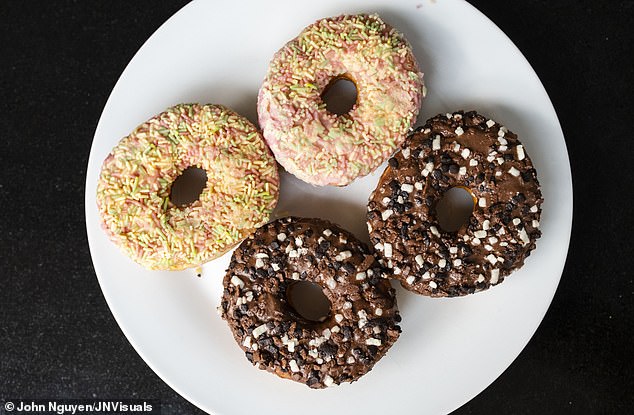 MANUFACTURER SAYS: Tesco declined to comment but does not recommend customers consume products that have passed their ‘use by’ date for safety reasons.

VERDICT: As it’s sweet rather than savoury, this isn’t as stomach-churning as some of the other foodstuffs, and I don’t think eating it would make me ill.

LOOKS: While the bun looks stale, the burger inside looks freshly cooked. Even the cheese appears waxy, as if it’s just been melted.

FEELS: Solid and cardboardy. Burger is flaky rather than moist. 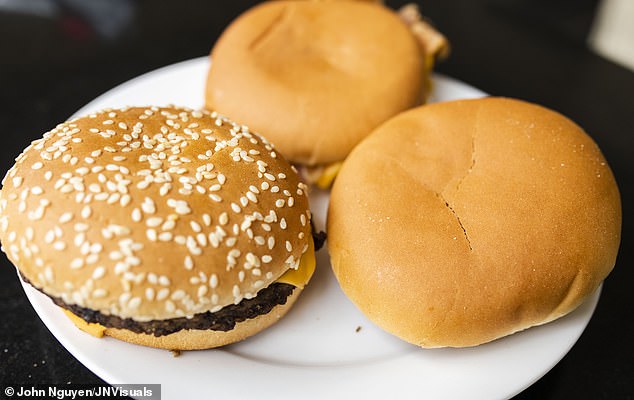 BACTERIA COUNT: Medium (1 CFU). Not as high as I’d feared, given the presence of meat. It seems to have dried out over two years, rather than rotting — although I still wouldn’t brave a bite.

VERDICT: The oldest McDonald’s burger still in existence is said to date from 1999, so this is no surprise. Still, the lack of decay is startling — and the bacteria count makes me feel quite sick.

LOOKS: Like they’ve just been tipped out of a sealed packet. They’ve kept their ridges and the coating — salt and orange seasoning — is still visible.

SMELLS: There’s a faint whiff of something meaty.

FEELS: They have lost their crunch and are instead slimy with grease. 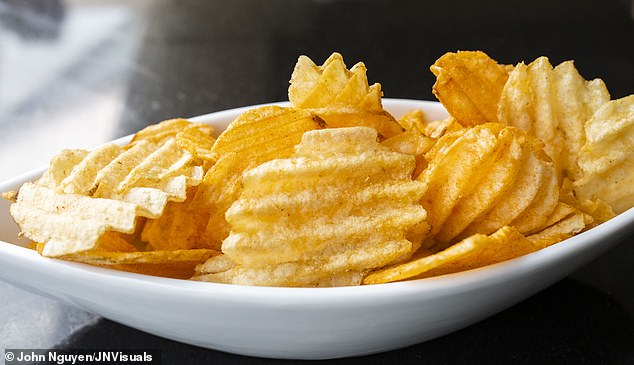 BACTERIA COUNT: Low (0.5 CFU). The sample showed only a small amount of bacteria on the crisps.

MANUFACTURER SAYS: ‘All Walkers potato crisps are preservative-free . . . The frying process makes our crisps very low in moisture, which means they are unlikely to decompose.

‘However, if left in an unsealed container for a long period of time, the crisps would become soft and stale, which would make them very unpleasant to eat.’

VERDICT: These have lost all their crispiness and become soggy potato slices, overly-seasoned. Saying that, one or two probably wouldn’t do me any harm.

LOOKS: Freshly baked. The pastry is crisp and golden and flakes off in my fingers.

SMELLS: The pastry has no aroma but the sausage inside — now shrivelled to half its size — smells unpleasantly sweet and malty.

FEELS: Solid all the way through. It’s heavy, too. 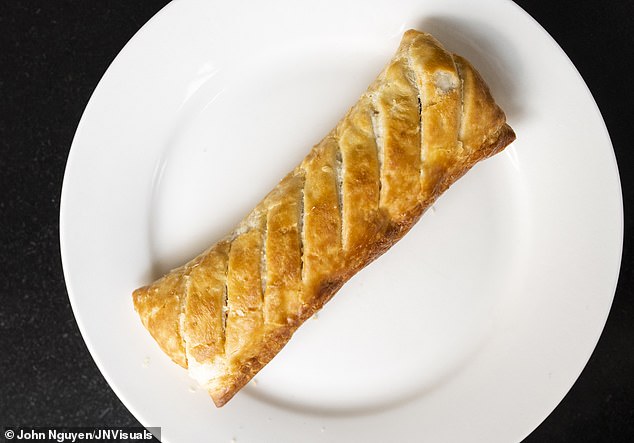 BACTERIA COUNT: Medium (1 CFU). The thick pastry coating seems to have stopped the meat from decaying too much, but it’s still not going anywhere near my plate.

VERDICT: I’m a sucker for a sausage roll but this will make me think twice.

LOOKS: The chocolate is dry with white spots on top. The orange jelly layer inside has all but disappeared.

SMELLS: That delicious dark chocolatey aroma has been replaced with an artificial, slightly sour tang, like gone-off milk.

FEELS: The biscuit is so dry it’s powdery and falls to pieces in my hands. 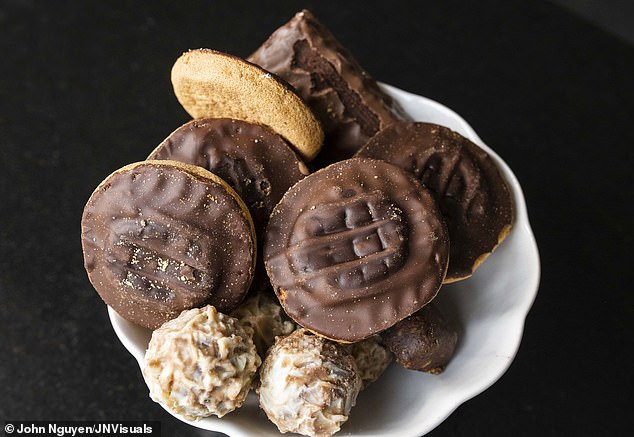 BACTERIA COUNT: Low-medium (0.75 CFU), so not as bacteria-ridden as some of the other samples, but surprisingly high for a sweet product.

MANUFACTURER SAYS: McVitie’s did not respond to requests for comment.

VERDICT: All the components of a Jaffa Cake are still there, but not in a good way. The biscuit base looks like reconstituted dust.