EXPRESS INFORMER > News & Politics > Can YOU spot the snow leopards – even when there’s no snow?

Can YOU spot the snow leopards – even when there’s no snow? ‘Ghost cats’ blend perfectly into their surroundings

By James Callery For Mailonline

Well-camouflaged snow leopards can be almost impossible to spot in their mountain setting – but can you find the elusive ‘ghost cats’ in these stunning images?

Ismail Shariff, 41, is a wildlife photographer who specialises in capturing these secretive creatures in their natural environment.

Mr Shariff’s collection of images have been taken over the last eight years in the Spiti region in Himachal Pradesh, India. His brain-teaser images have gained him the title: the Snow Leopard Man of India.

Can you spot the snow leopards in the pictures below?

A rocky outcrop in the Spiti region of Himachal Pradesh, India. Can you spot the elusive snow leopard in this picture? 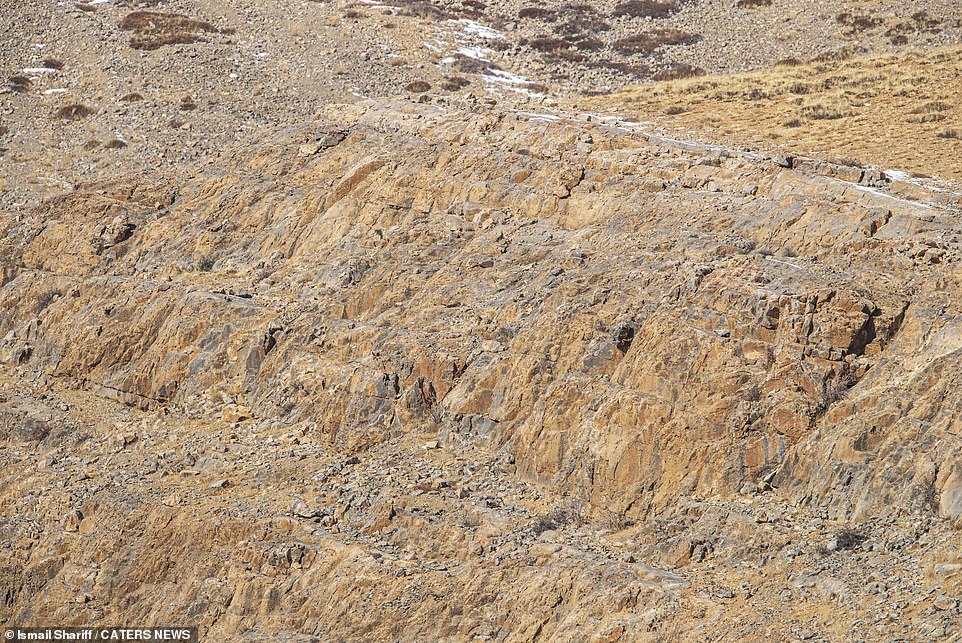 The global population of snow leopard is estimated to be between 3,500 and 7,000, according to the Snow Leopard Conservancy India Trust. The big cats are hiding somewhere in this picture 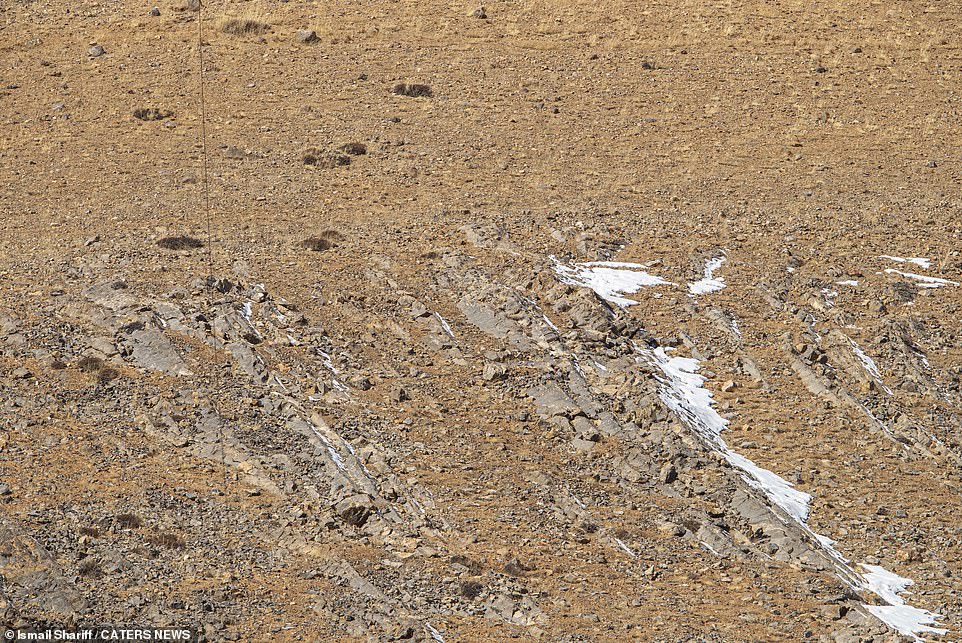 The snow leopard can spend up to 18 hours a day resting or sleeping, according to Snow Leopard Trust. How many of the rare mountain creatures can you find in this image? 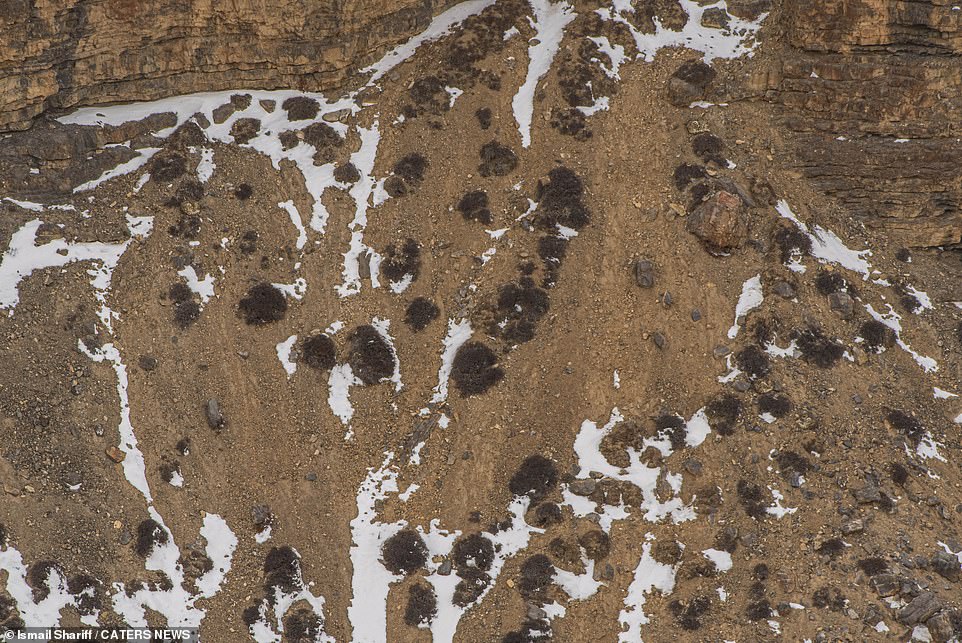 Mr Shariff said: ‘Seeing them in their natural environment in the world, takes a trained eye but every time I do, it’s like spotting one for the first time.’

He admits that even while leading a snow leopard photography expedition, he still struggled to spot them, despite his experience.

Snow leopards scale steep slopes of mountains in Central Asia, blending into the landscape. They are under threat from habitat loss and degradation from climate change and human encroachment, retaliatory killings resulting from human-wildlife conflict, reduced prey, and poaching.

Snow leopards are found across a huge swathe of northern and central Asia’s high mountains, including the Himalayan region.

In the Himalayas, the majestic cats live in high alpine areas. They inhabit 12 countries around the world – including China, Bhutan, Nepal, India, Pakistan, Russia, and Mongolia.

The mysterious ‘ghost cats’ are known for their distinctive meowing, grunting and moaning. The magnificent creatures purr when they’re exhaling.

Often solitary, the leopards however join forces to hunt in pairs – usually mating pairs. They prey on wild animals like the Himalayan blue sheep, the Himalayan tahr, argali, and wild goats.

However, the beasts are known to target domestic livestock too, meaning they can themselves fall victim to angry farmers.

Snow leopards are nearly impossible to spot for an untrained eye, but once you do sight them, you can see how good their camouflage really is.

Revealed: Did you find the creatures circled below? 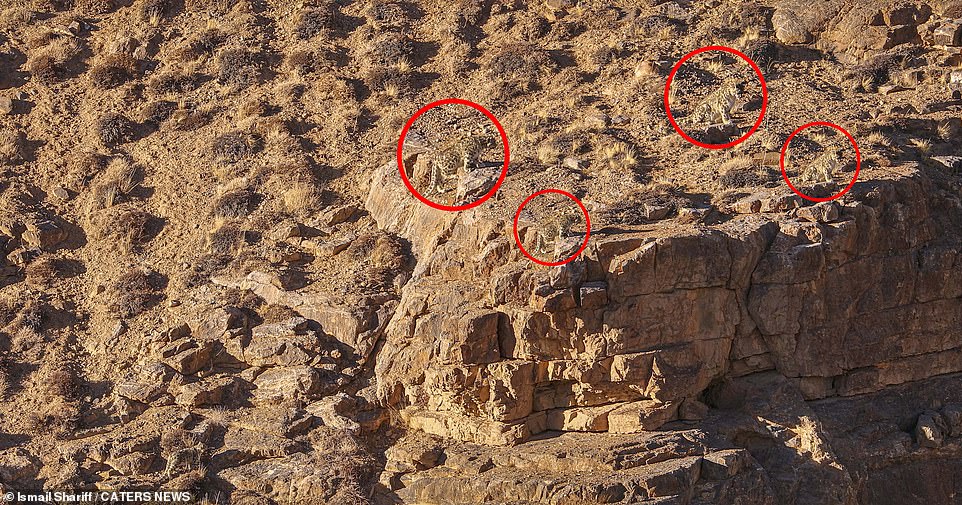 There are four snow leopards in the picture. It is rare to spot even one of these beautiful creatures 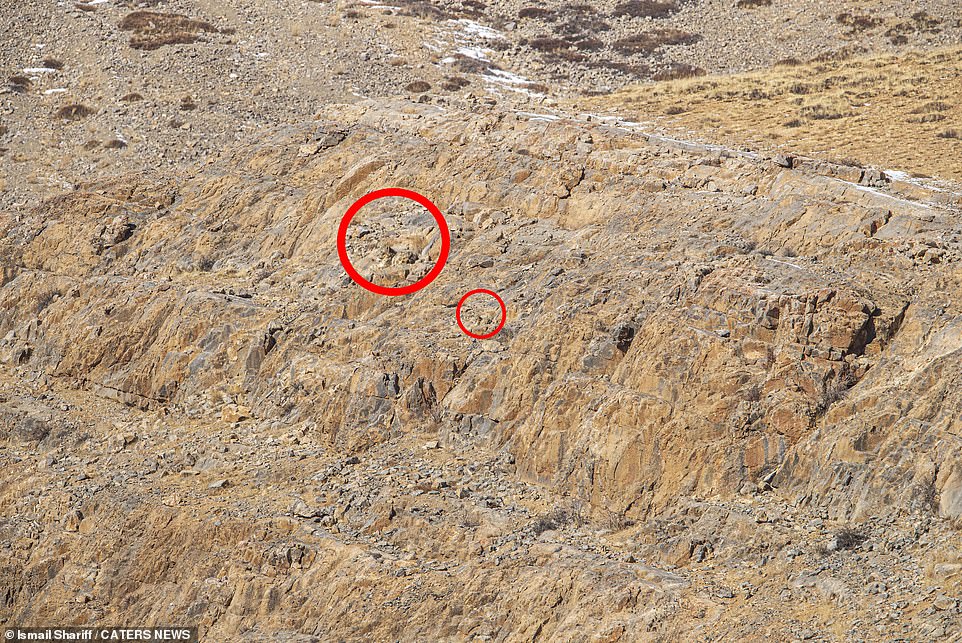 Snow leopards scale the great, steep slopes of mountains in Central Asia with ease, blending into the landscape. Here, two of the big cats can be seen camouflaged against their surroundings 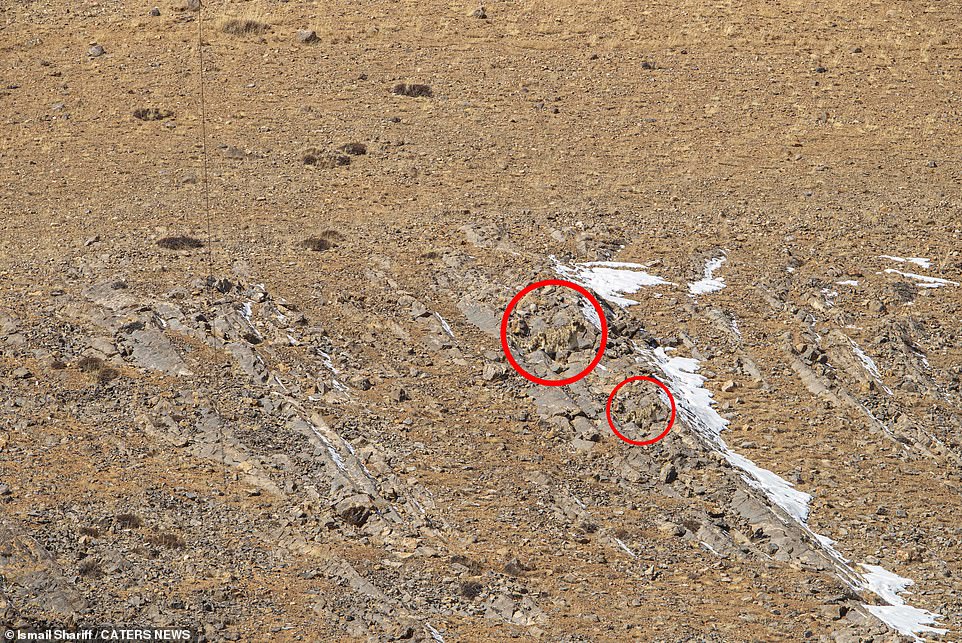 Snow leopards face many threats including habitat loss and degradation from climate change and human encroachment, retaliatory killings resulting from human-wildlife conflict, reduced prey, and poaching. Did you spot these two creatures in the picture above? 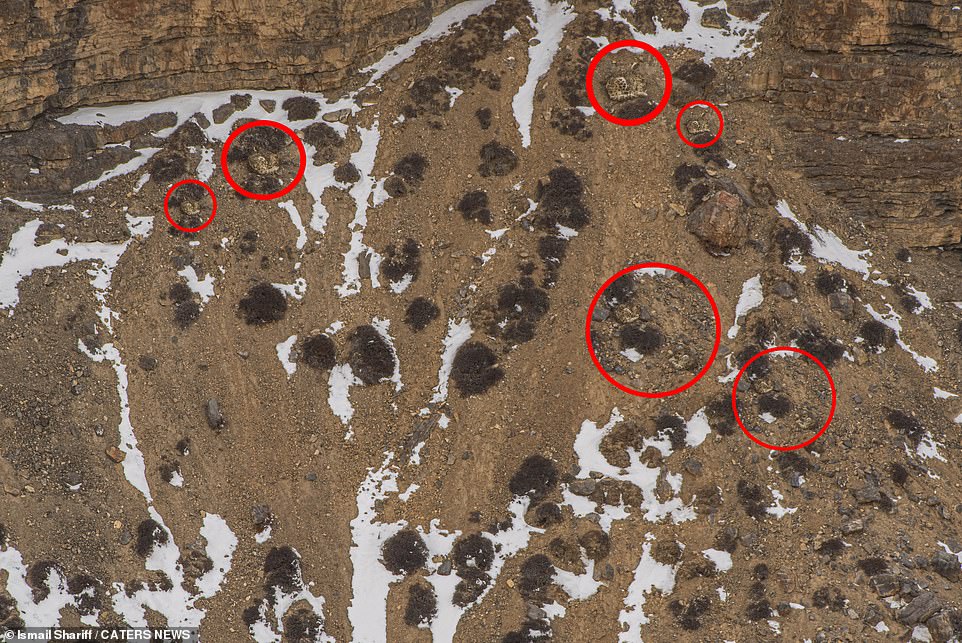 Snow leopards are found in 12 countries – including China, Bhutan, Nepal, India, Pakistan, Russia and Mongolia. There are an incredible six snow leopards in this picture