EXPRESS INFORMER > News & Politics > Can you be infected by cash and will it be a virus victim?

Brothers Chris and Jeff Abbott went back to work last Saturday, when they opened their two DIY shops for the first time in four weeks.

Only three customers are allowed in at a time and chip-and-pin machines are cleaned frequently with antibacterial wipes. Acrylic screens shield staff from customers at the tills.

But the coronavirus has prompted another change to the 41-year-old family business.

Abbott’s DIY is no longer accepting cash payments at either of its shops, in Ottery St Mary and Seaton, East Devon.

Endangered: Experts fear there may be only months to save the UK’s cash system from collapsing

It’s a decision many other businesses are expected to make as they emerge from lockdown. Research conducted for Money Mail by Amaiz suggests 50 per cent of small businesses have gone cashless or plan to do so due to the virus.

Only 21 per cent of the 500 respondents the small business banking app surveyed had no plans to abandon cash payments.

Experts fear there may be only months to save the UK’s cash system from collapsing.

Last month, under lockdown, cash withdrawals fell by 60 per cent compared with April 2019, according to ATM operator Link, whose chief executive John Howells says the pandemic is ‘speeding up’ the decline of cash, and that a fall in cash use expected to take place over five years will happen within five months.

He says: ‘If we do nothing, we could be in a virtually cashless society in two years’ time.’

Last week, B&Q opened all 288 of its stores, with customers allowed to pay only by card or using contactless, to reduce contact between customers and staff.

Can you really be infected by cash?

Cash, coins and cards — just like other surfaces — have the potential to carry the Covid-19 virus.

But the Government has yet to issue any official guidance on whether people should avoid using cash. This is because it is understood to pose no further risk than handling other everyday items — assuming shoppers follow advice about washing their hands frequently and avoiding touching their faces.

However, draft guidance seen by the Mail suggests that shops may be encouraged to abandon cash when lockdown restrictions are lifted.

Scientific evidence suggests that the virus can live on various surfaces for different lengths of time. The World Health Organisation (WHO) cites an experimental study which found the virus can survive for up to 72 hours on plastic and stainless steel and up to four hours on copper.

But a WHO spokesman says further experiments and analysis are needed in order to understand more about how the virus is transmitted.

Britain’s biggest supermarkets, including Sainsbury’s and Tesco, have been urging their customers to pay without cash since March.

The contactless payment limit has been increased from £30 to £45 in the pandemic, allowing customers to make more payments without having to touch a chip‑and-pin machine.

About three-quarters of adults in Britain have used less cash since the start of the pandemic, and a similar number believe they will continue to do so over the next six months, according to a YouGov poll conducted on behalf of Link.

And as more than 3,500 bank and building society branches have shut their doors or been earmarked for closure since 2015, according to Which?, many business owners are having to travel further to deposit cash takings.

A third of the UK’s bank branches were closed in the four-and-a-half years to August last year, the consumer magazine found.

Experts fear the virus could lead to even more branches being shut down because they are used less — and there could be even fewer ATMs, as most machines not attached to branches are run by private companies.

If cash withdrawals keep declining, the companies won’t be able to afford to keep all the machines open. Already, about 17 per cent of free-to-use cash machines have disappeared in the past two years, according to Which?.

Chris Abbott, 41, had never considered banning cash before. While it costs him £2.50 to deposit £100 of cash in his account, and less than £1 to deposit the same amount in cashless purchases, he would rather give his customers the choice.

But he won’t accept cash until there is a significant drop in the coronavirus infection rate or there is an effective vaccine.

Chris says: ‘I would rather not sell a single item than put a member of staff’s health at risk.’

The Government has not yet issued specific guidance on using cash, as it should pose no greater risk than touching other everyday items such as shopping trolleys.

Yesterday, this newspaper reported that shops would be encouraged to scrap cash payments entirely once lockdown was eased.

Draft Government guidance to business states that retailers should accept only cards or contactless payments while the coronavirus is still a threat.

Age UK has warned the financial watchdog that the UK’s ‘headlong rush towards a cashless society’ will be catastrophic for the most vulnerable.

The charity reports a surge in the number of older customers who say they have exhausted their cash supplies in the pandemic and fear they could soon run out of food and other essentials.

It asks the Financial Conduct Authority (FCA) to consider forcing building societies and banks to bolster their support for the elderly during the current crisis.

Banks have launched a range of initiatives to help their vulnerable customers through outreach drives, helplines, postal services and making it easier for other people to get cash on their behalf.

Age UK says that while it welcomes these steps, many of the most at-risk customers are unable to use the new schemes. It also warns that pushing customers to contact their bank online will isolate the 2.3 million over-70s who don’t have internet access.

The charity says telephone banking must be readily available, amid reports that older people are facing long waits, and then not being able to access the services they need.

Age UK director Caroline Abrahams says: ‘It is crucial that every bank does all it reasonably can to help these vulnerable customers, including going beyond the new services they have already established.’

The FCA says it has worked to keep branches and call centres open and has developed cash delivery services for vulnerable customers.

Professor Sally Bloomfield, from the London School of Hygiene and Tropical Medicine, says contactless payment is probably the least risky option — yet she says touching a chip-and-pin machine could potentially be riskier than using cash, as more people touch them each day.

‘I had already been considering going cashless. By the time lockdown ends, people will feel more comfortable with using their cards and phones to pay.’

He made the decision to protect staff in his cafes: Pantry, in High Wycombe, and Sycamore on the Hill, in Amersham, Bucks.

But he plans to make the change permanent when he reopens.

Since lockdown began he has been running a cashless delivery system, where customers can order coffee and cakes directly to their doors.

He uses the app iZettle Pro to send invoices to customers’ phones, so they can pay via text message or email.

Charles, 35, says: ‘I had already been considering going cashless. By the time lockdown ends, people will feel more comfortable with using their cards and phones to pay.’

But convenience store manager Manju Karavadra has found it more difficult without cash.

Marshchapel Stores and the Post Office inside it are a lifeline for the coastal village of Marshchapel in Lincolnshire. It has a population of just over 700 and the nearest supermarket is almost five miles away. 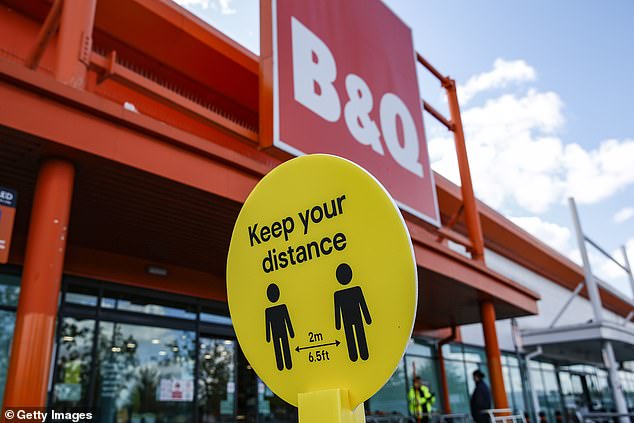 Cash ban: Last week, B&Q opened all 288 of its stores but is only allowing customers to pay by card or using contactless, over concerns that coins and notes could carry the virus

But when Manju began putting up signs asking customers not to pay with cash last month, some of her older customers don’t feel comfortable using their cards for small purchases, such as a newspaper.

And younger customers have jogged to the shop from nearby villages bringing only cash because they didn’t know about the change. Last year’s Access To Cash Review found that the UK could become ‘virtually cashless’ by 2035.

More recent figures released before the lockdown suggested this would happen by 2030, but the pandemic may have pushed this forward.

In his Budget, Chancellor Rishi Sunak promised to introduce new laws to protect access to cash, but a consultation is yet to take place to decide what these laws will be.

Natalie Ceeney, author of the Access to Cash Review, warns: ‘About 20 per cent of the population still need cash. A large proportion are vulnerable, including the elderly, disabled or those on low incomes.’

Last year, the Financial Conduct Authority research suggested some 1.3 million adults in the UK have no bank account at all — and even if someone has a debit or credit card, they may not be happy to hand it to a neighbour or volunteer to do their shopping.

‘We can’t go cashless until the infrastructure is in place and everyone in society is ready,’ says Ms Ceeney.

During the pandemic, banks and building societies have been encouraging customers to visit branches only when necessary.

A UK Finance spokesman says: ‘We have worked hard to ensure all customers are still able to make cash withdrawals, despite the constraints of lockdown, isolation and shielding.’

Some shoppers worry that carrying a card could put them at greater risk of fraud. Losses from fraud on UK-issued cards fell by 8 per cent between 2018 and 2019, but still totalled £620.6 million last year.