EXPRESS INFORMER > News & Politics > Can these pieces of equipment save you a trip to the gym and make the most of a home workout?

THE WORKOUT: FitXR, a game for the Oculus virtual reality headset, includes more than four hours of boxing-inspired workouts, including classes to suit beginner, intermediate and advanced users.

The workouts are choreographed by professional fitness instructors to give users a full body workout involving squats, lunges, jabs hooks and more.

BRIDIE’S VERDICT:  My first time trying the workout it was a bit of faff, familiarising myself with an Oculus, which I hadn’t used before was a bit strange. You need to draw out a boundary out in your playing area to avoid walking into or hitting anything.

But this is a one time thing, and as soon as you get going, any time you want to play you can slip on the headset and it’s easy to play.

Once its set up, and you open the game, you’re transported to a very realistic gym reception, where you can sign up and pick a class to do.  It is slightly Black Mirror-esq, but I liked it.

After the initial novelty of trying out a VR headset (I had played around with Google cardboard before, but this was my first time using a VR console),  which was both awe-inspiring and trippy, I was in and ready to box.

I love working out, and in lockdown I’ve ditched my overpriced gym membership for an online service app which is about 10th of the price, where I’ve been indulging in a mix of HIIT, strength and yoga every week – so I was really excited to try a new home workout.

But I’ve never done a boxing workout before, and have a tendency to ignore working my upper body, so I was extra keen to try a class that forced me to build up strength in my arms, shoulders and back. 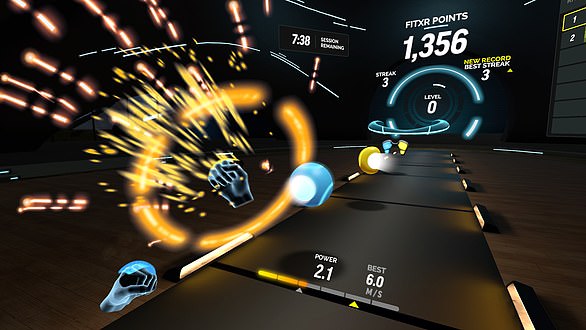 One of the first times I tried it, having a mix of yellow and blue asteroid-like balls flying at me, I had to take the headset off and remind myself to breathe and that I was in my living room and not being attacked.

After a couple attempts, I got really into it, and it felt like a really fun game. If you’ve ever played Guitar Hero or used a dance mat it will feel familiar. Lots of orbs flying towards you which you have to hit, jab, cross, or uppercut (as well as other objects you have to block or squat to avoid).

It definitely seemed like a game than a workout – which is arguably a good thing – as it’s still a great calorie burner.

The programme has a mix of classes which last  three – 60 minutes.

The programme was telling me I burned about 200-300 calories every ten minutes, which is very generous.

My fitness tracker and heart rate monitor predicted I was burning about 100 calories every 10 minutes, which is still a very good amount. 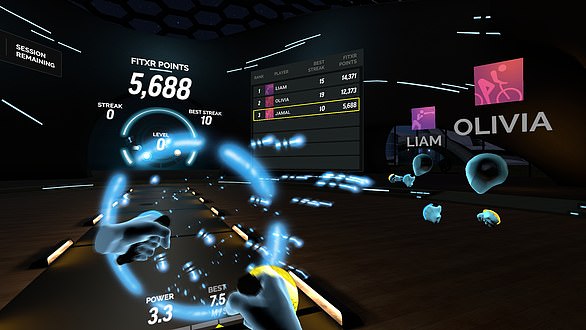 Overall, it’s very fun, and addictive. I found myself slipping on the headset every few minutes spare I had. While I was cooking dinner and waiting for a sauce to thicken I’d have a quick five minute box. It’s also quiet, which I’m sure my downstairs neighbours appreciated.

I felt like I was improving very quickly, and while at first I was struggling to get a streak (hitting enough orbs in a row) of more than 10, within a couple weeks I was getting triple figures every time.

Despite a mix of music and different moves, including Hip Hop, Rock, Pop and Electronica, there classes can be a little repetitive and there’s no obvious plan or way to take the classes.

There’s also no guidance on how to punch and squat correctly, this paired with the fact there’s no warm up or cool down makes me nervous about someone doing this and this alone could be barrelling themselves towards an injury or build up of incorrect form.

Because of this, I found myself using FitXR as a tough finisher or warm-up on top of another workout class rather than a standalone workout plan.

It’s better for gamers than people who are seriously into fitness, but it is fun, and accessible, and definitely not like any fitness class I’ve tried before (and I’m a sucker for every new health trend).

It’s founders believe VR is the future of fitness, and it might be. But I think it could be utilised for a lot more fun things too. With virtual reality you could be keeping fit by fighting zombies or slaying demons – rather than sitting in another gym.