EXPRESS INFORMER > Science & Technology > Can robot assistants transform our care system? A solution out of a science-fiction blockbuster

Can robot assistants transform our care system? It’s a radical solution that could have come straight out of a science-fiction blockbuster

It’s a radical solution that could have come straight from a science-fiction blockbuster.

But a robot could be brought into British care homes this year to help solve the staffing crisis.

The fully autonomous Aeo android can do the rounds on its own, checking up on residents and bringing them their medicine.

Human staff meanwhile can keep an eye on its progress remotely through an app, with a live video feed showing its progress in real time.

Aeolus Robotics said its droid has already been used to great success in Japan, Hong Kong and Taiwan, where it has been employed by some of the countries’ biggest care providers. The firm told the Daily Mail it is looking to expand into the UK in 2023 and is in talks with distributors and partners.

It is unveiling the android – which is also used in Japan as a security guard in schools and offices – at the Consumer Electronics Show in Las Vegas this week. Staff shortages were recently identified to be a key problem in three-quarters of care homes who had their ratings cut to ‘inadequate’ this summer by the regulator.

It’s already a key member of the team

A wave of inspections revealed the issue was affecting thousands of vulnerable residents, with reports of some left in their rooms for 24 hours a day.

Aeo however – who resembles robot Eve from 2008 animated Pixar film Wall-E – can take over the job of human staff. Onboard cameras and built-in infra-red sensors let it navigate autonomously through corridors at just over 2mph. 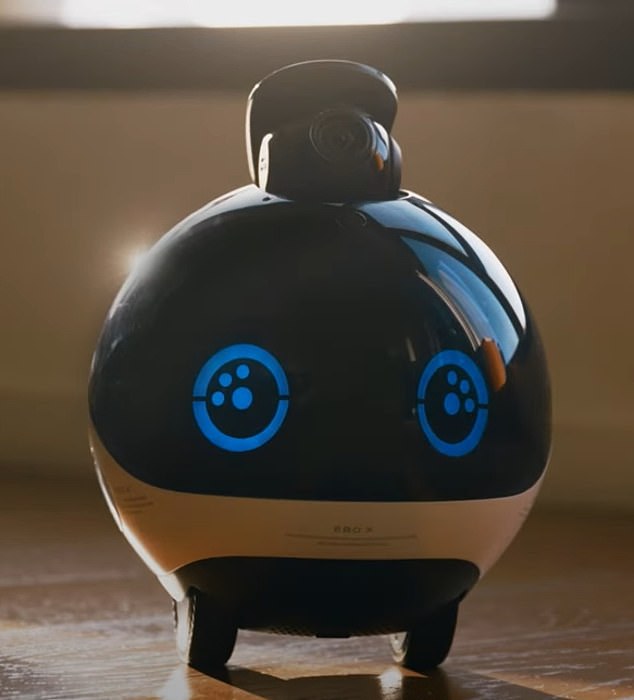 Human staff meanwhile can keep an eye on its progress remotely through an app, with a live video feed showing its progress in real time

Meanwhile, its two mechanical arms can be fitted with various tools, including a pincer to operate lifts, open doors, or close windows and pick things off shelves up to 7ft high.

A tray can also be attached to deliver food or medicine, or it can be equipped with an ultraviolet light to disinfect door handles and other surfaces.

Aeo is strong enough to lift a gallon of milk but gentle enough to hold a phone without dropping or crushing it. It is also built with sophisticated artificial intelligence that can alert nurses if residents’ posture looks to have changed, signalling they may have had a fall.

The boss of one of Japan’s biggest care providers, Senior Life Central, has told how the robot is improving its patient services. General manager Kayo Kojima said: ‘The robot is already one of our colleagues and a key member of our team. It takes on completing simple tasks that frees up our staff to have more time to interact with patients and staff.’

And Alexander Huang, of Aeolus Robotics, said: ‘Our goal is to create robots that will enhance quality of life and advance the positive impact robots already have on society.’