Just under a year ago, Legal & General Investment Management was celebrating a milestone anniversary.

It was 20 years since it began its involvement in an innovative strategy for its pension fund clients. Britain’s largest asset manager enthusiastically plugged the strategy, boasting in a note last November that it ‘should help trustees and sponsors sleep better at night’.

So what was the name of this miraculous solution? Liability-driven investment, or LDI – an abbreviation few had heard of until a few weeks ago. Now, it is synonymous with a near meltdown after a bond market sell-off in the wake of former Chancellor Kwasi Kwarteng’s ill-fated mini-Budget.

Legal & General Investment Management is part of the wider L&G life insurance group, which has seen its market value fall by more than 10 per cent since the mini-Budget.

It is a rare setback for the chief executive of ten years’ standing, Sir Nigel Wilson, 65, who has won plaudits for investing in UK housing and infrastructure. Astutely, he spurned a job offer from former Prime Minister Liz Truss as Minister for Investment. He may find he has plenty to do in his day job, since LDIs are not the only issue worrying investors in the 186-year-old insurance company.

As recession fears mount, they are also fretting over the outlook for the tens of billions of pounds of corporate bonds that it holds. The group has admitted that the ‘extraordinary’ and ‘unprecedented’ bond market sell-off has ’caused challenges’ for its LDI clients.

The idea of LDIs, as the firm explained in its November 2021 note, was to reduce the risk of final salary retirement schemes being unable to pay pensions as they became due. L&G has become the biggest player in an industry that has ballooned in scale to £1.6trillion. It has attracted more pension schemes to use the strategy by making increasing use of leverage – ramping up returns, but also risks, by borrowing. By November, L&G had over 800 LDI clients.

Analysts estimate that this year it was managing £400billion of LDI funds, equivalent to 30 per cent of its assets under management.

When the market in UK bonds collapsed, it created a selling spiral that prompted the Bank of England to step in with a temporary pledge to buy up to £65billion of bonds.

L&G was able to reassure investors this month that the intervention had alleviated the pressure on clients and that, as a middleman between clients and lenders, its balance sheet was not exposed.

Rival Schroders, a smaller player in the LDI market, revealed this week that it took a £20billion hit to assets in the market maelstrom.

But for L&G, its LDI assets under management are likely to have taken a £40billion hit, according to one analyst covering the sector.

He said it would have little direct impact on group profits. But what markets fear is a rise in corporate bond spreads – the difference between the rates bondholders can charge for lending to firms as against the lower rates on benchmark UK Government bonds. An increase in those spreads implies nervousness about companies’ outlook. That could mean trouble for L&G, which holds £80billion of corporate bonds to provide an income stream to pay out on annuities to pensioners, the analyst said. 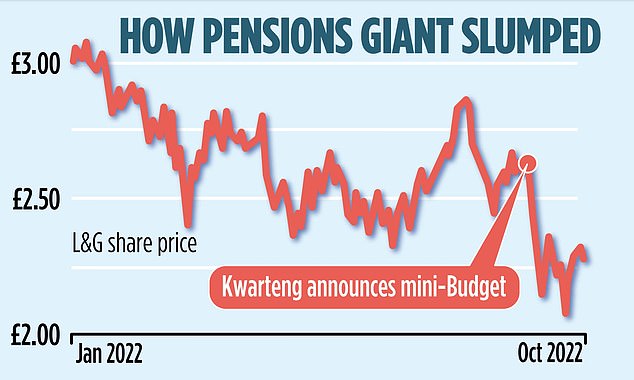 ‘If there are lots of defaults and downgrades in the credit market L&G would be negatively affected,’ he said. ‘Nothing’s happened yet but spreads widening is seen as a precursor to downgrades and defaults.’

The analyst said L&G’s bond portfolio had performed ‘extremely well’ through previous stresses. But he added: ‘I do understand the fears that if there is a great global credit event, a recession where corporates go under and can’t pay their debt – something unexpected – then L&G would be affected.’

He added that this scenario is not currently the mainstream view.

L&G said it had not experienced any difficulties in meeting ‘collateral calls’ in its annuities portfolio.

Analysts at JPMorgan said in a recent note that the LDI episode had had ‘more positive than negative consequences’ for the sector, as it could drive firms to offload their pension funds to life insurers such as L&G.