A blood product drawn from deep within the veins of people who have recovered from coronavirus may help others win their fight against it.

Convalescent plasma, as the treatment is known, is being investigated both as a treatment for Covid-19 and as a way of protecting frontline medical staff from catching the virus.

But just what is it? And how could it help in the battle against coronavirus?

Plasma, a key component of blood, is already saving lives in a multitude of ways; from warding off tetanus infection if you stand on a rusty nail to preventing organ failure in victims of car crashes.

Blood plasma could help treat coronavirus patients. The plasma from those that have survived the infection will be filled with defensive antibodies. (Pictured: Woman in hospital in Seattle)

The straw-coloured fluid is so precious it has been nicknamed ‘liquid gold’. It accounts for 55 per cent of blood’s volume and carries three key constituents around the body — red and white blood cells and platelets (tiny cells that help form clots to stop bleeding).

It also contains thousands of vital proteins including albumin, fibrinogen and antibodies.

Albumin, which is made in the liver, keeps fluid from leaking out of blood vessels and into the body’s tissues, while fibrinogen is involved with clotting, and antibodies destroy bacteria, viruses and other substances the immune system sees as ‘foreign’.

It is the antibodies that are at the core of the convalescent plasma therapy being investigated for coronavirus.

This therapy, first used to treat infections more than a century ago, hinges on the fact that people who have recovered from a virus have antibodies in their blood that detect and destroy the virus the next time it attacks. The theory is that by giving antibody-rich plasma from someone who has recovered from Covid-19 to someone who presently has it, it should help them fight it off. 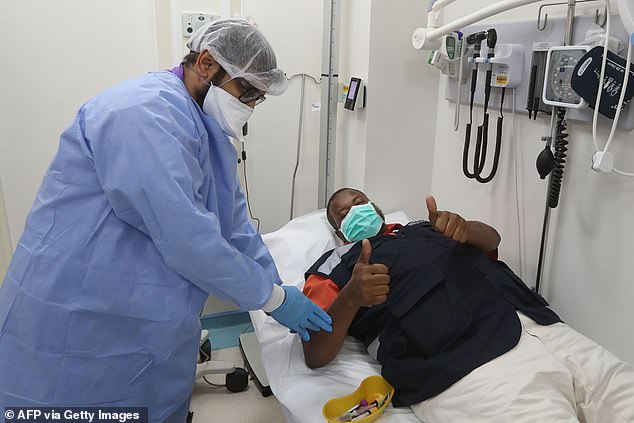 The NHS is appealing to people who have recovered from COVID-19 to see if their blood can help critically ill patients in the UK. The treatment is being used in countries including Qatar

Crucially, while a drug or vaccine for a new disease can take years to develop, blood from survivors is available almost instantly, but it would need to undergo stringent safety measures, such as screening for infections, before use.

Corona explainer: A guide to why the virus causes certain symptoms

According to the World Health Organisation, around one in seven experiences a headache as a symptom of Covid-19.

One theory behind the cause is that when a virus invades the airway, the immune system releases large amounts of the protein interferon to fight it off.

This hinders the replication of the virus and also bolsters the immune system’s response to it. However, the release of interferon can irritate nerves found in the lining of our blood vessels — including those in the head — which then dispatch pain signals to the brain.

Doctors think interferon is to blame because patients who take drugs made with the protein, such as those with multiple sclerosis or hepatitis C, frequently report headaches, as well as general flu-like symptoms, as a side-effect of the treatment.

The treatment has already shown promise in small-scale studies on coronavirus patients in China. To carry out the treatment, a donor’s blood is taken and piped through a machine that separates out the plasma before returning the rest of the blood to the donor.

Next the plasma is screened for other infections and, if safe to use, 200ml of plasma is infused into the coronavirus patient, which takes 20 to 30 minutes.

In one study, involving five critically ill patients, published in the Journal of the American Medical Association earlier this month, all improved and three were able to come off the ventilators after having the infusion. In another study, which involved ten severely ill patients, symptoms including fever, shortness of breath, coughs and chest pain improved within three days of being infused with plasma from people who had recovered from coronavirus, reports the journal Proceedings of the National Academy of Sciences.

Trials are also under way in France, Germany and the U.S., where universities and hospitals in 20 states are working together on testing the treatment. Plasma donors include the mayor of Miami, who has recently recovered from Covid-19.

The UK is gearing up to start trials — with experts predicting the first patients could be treated within a fortnight. NHS Blood and Transplant (NHSBT) is starting to collect plasma from people who have recovered from the virus and says it is working hard to get the green light to use it in trials to determine whether it improves patients’ speed of recovery and chances of survival. But some experts are questioning why we are behind other countries. 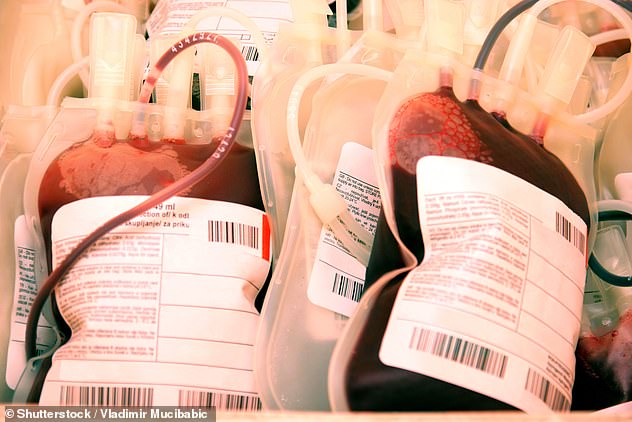 Colin Hamilton-Davies, a consultant in anaesthesia and critical care at Bart’s Hospital in London, has warned ‘time and lives are being wasted’, adding the treatment could save many lives if implemented quickly’. Professor Sir Munir Pirmohamed, president of the British Pharmacological Society and a professor of pharmacology at Liverpool University, says proper trials are needed to determine whether the treatment is ‘truly beneficial’ and cautions that there are still many unanswered questions.

We debunk the Covid-19 hoaxes online. This week: A dry mouth allows coronavirus to enter the body

‘A dry mouth can make you susceptible to a lot of things in terms of decay and gum disease, because saliva has antibacterial properties,’ says dentist Sunny Sihra, of Simply Teeth in Essex.

‘But Covid-19 infection is caused by a virus and saliva does not have antiviral properties. Also, people generally breathe coronavirus in, through the nose.

‘Sipping water every 15 minutes to wet the mouth and “flush” the virus into the stomach’, as hoax messages advise, is not going to help.

‘The most important thing is washing your hands, trying to avoid contact with others — and stop touching your face, nose and eyes as it can get in through mucous membranes there.’

For example, it’s unclear when the best time is to collect plasma from donors, how much to give patients and at what point to give it. And collecting and infusing enough plasma to treat large numbers of patients would be a huge challenge.

‘Those results were encouraging,’ says Professor Pirmohamed. ‘But we also don’t know whether it was the plasma that did it or the other drugs patients were also given, or a combination. Even if shown to work, treating large numbers of patients may become an issue. There are a lot of logistical hurdles to overcome.’

Another option is not infusing patients with whole plasma but just the specific antibodies that protect against coronavirus.

Concentrated in high amounts, they should be more powerful and could be given in an injection that takes a few seconds, rather than via a lengthy infusion. These treatments, known as hyperimmune immunoglobulins, could also potentially be made in large quantities and stored in hospitals, for use when needed.

They will take longer to develop, but several companies, including Bio Products Laboratory, a Hertfordshire-based company that makes medicines from plasma, are already working on them.

Identifying the right antibodies to include in the recipe will be key but a jab could be available by September, says Dr John More, director of research and development at Bio Products Laboratory. ‘It could be given to frontline healthcare workers to provide protection against coronavirus until a vaccine becomes available,’ he adds.

Treatments based on antibodies extracted from plasma are already in use for other conditions. 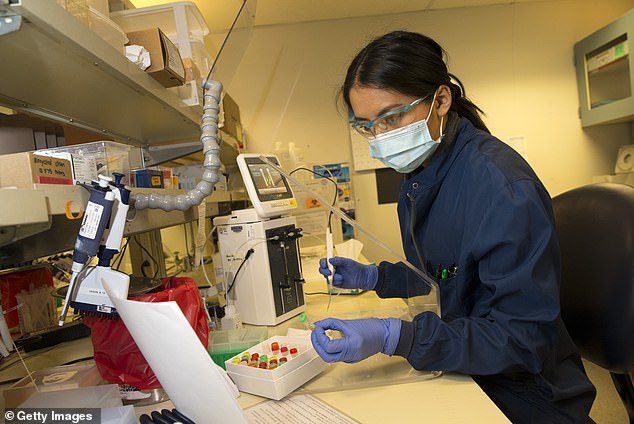 For instance, if you cut yourself outdoors, you will likely be given an injection of antibodies against the tetanus bacterium (deep wounds are a breeding ground for the bacteria which live in soil and dust).

Meanwhile, those bitten by a rabid dog will be given an injection of antibodies against rabies, and chickenpox antibodies can be given to pregnant women who have been exposed to the illness to prevent them developing complications in the unborn child.

Antibodies from plasma also have another use in pregnancy —to prevent rhesus haemolytic disease, in which antibodies in the woman’s blood destroy her unborn baby’s blood cells. While harmless for the woman, it can lead to brain damage, deafness and blindness in the foetus and even stillbirth.

Given during pregnancy, anti-D immunoglobulin treatment successfully nips the production of these antibodies in the bud.

While in the 1950s, around 1,000 babies a year died of the condition, routine screening means such deaths are now ‘vanishingly rare’.

Proteins in plasma involved in the blood clotting process are also extracted, purified and used as treatments for genetic disorders that affect clotting.

Whole plasma — obtained from donated blood — is used in hospitals to help stem bleeding (due to the various clotting proteins it contains) in patients who have lost a lot of blood in an accident, during surgery or giving birth.

If bleeding is very severe, patients can be given a more concentrated version of plasma called cryoprecipitate, which is extra-rich in fibrinogen.

This provides extra help with clotting, says Mike Murphy, a professor of transfusion medicine at Oxford University and a consultant haematologist for NHS Blood and Transplant. Plasma can also be given to stop serious internal bleeds in patients on warfarin (a blood-thinning medicine).

‘Plasma has many therapeutic areas of use and can be used in a number of different ways,’ says Professor Pirmohamed. ‘We now need to find out whether it could help with coronavirus, too.’

‘If it is, truly beneficial it ‘can be rolled out to the mass population’, he adds.