After Cineworld boss Mooky Greidinger is convicted in Israeli court over botched business deal, can he bring stricken chain back from the dead?

When Mooky Greidinger was handed a criminal conviction this summer, he was devastated. He told an Israeli court it was something he’d never expected to happen.

But life was not about to get any easier for the cinema tycoon.

Two months later, Greidinger’s company Cineworld – which grew to become the world’s second largest cinema chain – filed for bankruptcy protection in the US.

Optimistic: But boss Mooky Greidinger has been found guilty in an Israeli court

The near collapse has been painful, for both Greidinger and his shareholders.

Documents seen by The Mail on Sunday show the group, once worth £4.4billion, was down to its last £4million. The figure was a far cry from the funds needed to pay its 30,000 employees worldwide or keep the lights on across its 9,000 screens.

‘Two and a half years ago our life’s work collapsed,’ he said at his hearing. ‘Because of Covid-19, I’ve been fighting every day to save what we have built.

‘We were an unprecedented success story. I don’t think there are many Israeli companies that reached a status similar to the world’s second largest cinema chain.’

However, the company has been thrown a lifeline. A multi-billion-pound rescue package agreed with Cineworld’s lenders earlier this month will allow the company to embark on a drastic restructuring process.

Its cinemas will remain open and its shares are still trading – albeit at a fraction of their peak value.

In a presentation to creditors earlier this month seen by The Mail on Sunday, Cineworld pinned its problems on the Covid crisis and the delayed return of Hollywood blockbusters that followed. It described the pandemic as the ‘plot twist’ in the group’s colourful rise and fall.

Little reference was made in the presentation slides to its most ambitious deal – the one that signalled the peak of Greidinger’s ambition.

The $1.65billion (£1.45billion) deal to buy Canadian giant Cineplex collapsed just months after Covid struck. Cineworld has been handed an £800million legal bill for pulling the plug on the deal – which weighed heavily on the group’s already mounting debt pile.

The chain said its problems post-Covid were exacerbated by production delays that pushed back the release of films such as the James Bond movie No Time To Die and Marvel Comics’ Black Widow. Queues in its foyers seem unlikely to match the 275million visitors in 2019. Cineworld welcomed 80million customers in the first six months of 2022. But the shares are trading at 2.7p – less than 1 per cent of their 2019 high. 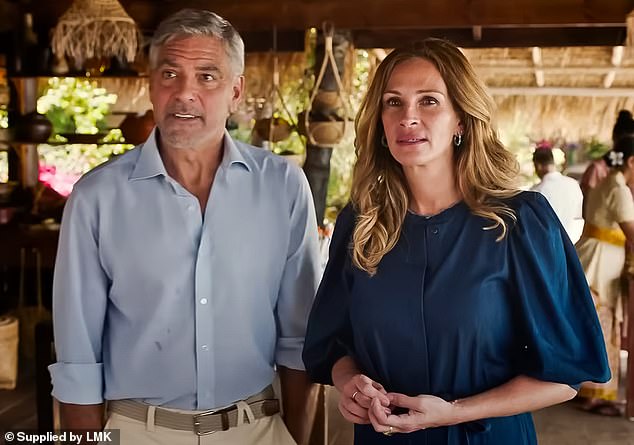 Happy ending? Romcom Ticket To Paradise with George Clooney and Julia Roberts could help Cineworld as movie-goers head back to cinemas

Greidinger will be hoping other releases later this year, including the romantic comedy Ticket To Paradise starring George Clooney and Julia Roberts; Avatar: The Way Of Water; or perhaps, more appropriately, the disaster movie Halloween Ends will help salvage the group’s fortunes.

The company’s struggles have not prevented Greidinger from drawing lucrative rewards from Cineworld – including £1.48million in 2021. Last month, The Mail on Sunday revealed that he and his brother Israel had received nearly £26million from Cineworld over the past eight years.

Argonaut Capital Partners’ Barry Norris, who holds a short position in Cineworld, has criticised the pay and bonuses as the company lost billions and received furlough money.

He said: ‘These guys were taking money out in the good times. And in the bad times they were still paying themselves well.

‘One of the things I can’t get my head around is how you could preside over such a disaster and not have resigned yet.’

But Greidinger’s thoughts will soon be plunged back to the Israeli courts that handed him his criminal conviction – a rare and dubious distinction for the boss of a London-listed company.

His conviction stems from a lawsuit brought by Israel’s competition authorities, which found that one of his companies withheld movies from a competitor in Tel Aviv. The court accepted a plea bargain.

‘This is a difficult moment for me,’ he said at the time. ‘A criminal conviction is not something I was expecting after so many years.’

The court will next month decide whether he will be handed a fine or a suspended prison sentence.

Despite his troubles, Greidinger said that neither he, nor Cineworld, would be heading anywhere fast.

‘Our goal remains to further accelerate our strategy so we can grow our position as the best place to watch a movie,’ he said.

No doubt the story will have a few more plot twists.