This is the terrifying moment an out-of-control campervan spun 180 degrees across a busy motorway – almost wiping out a tiny hatchback before smashing into a wall.

Car transporter Keiron Culley was left ‘shaking for an hour’ after almost smashing into the van when it careered across his path on the M40 towards Oxford on April 28.

The 24-year-old driver heard a bang and feared one of his truck tyre’s had burst at 56mph but soon realised it was another vehicle when the campervan passing in his outside lane suddenly went out of control. 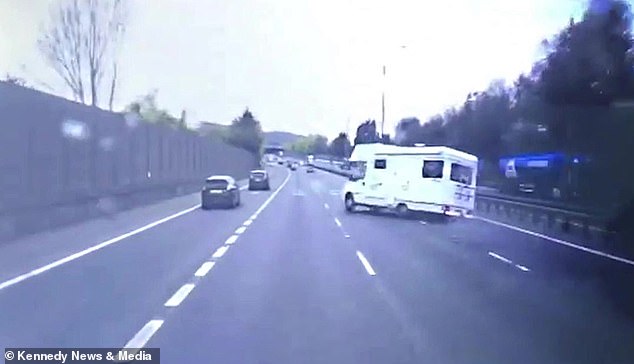 Moments after passing the truck, the white campervan swerved wildly to the left 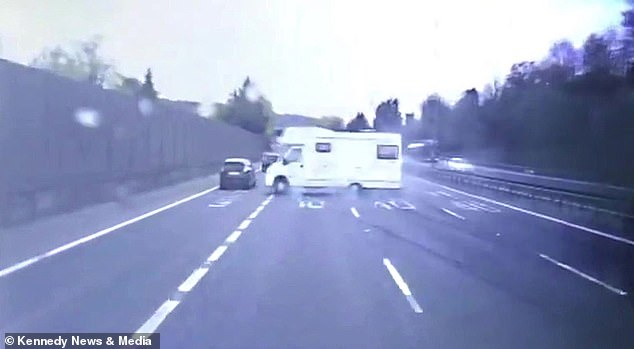 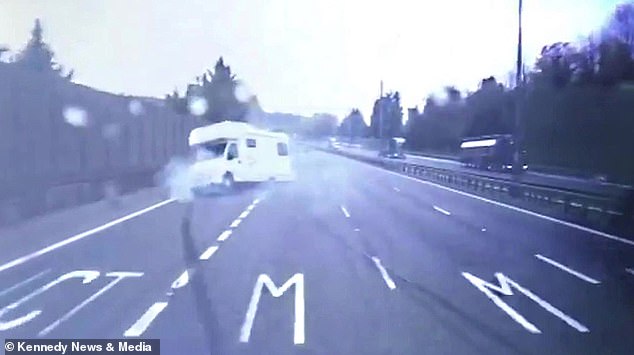 Amazingly, the large camper van did not topple over despite skidding sideways on the motorway

Scary footage, filmed around 2pm, shows debris kicked up from under the campervan’s tyres moments before it swung at a 90 degree angle just yards in front of Mr Culley’s lorry.

Unable to stop, the van swerved across the inside lane while turning more than 180 degrees and smashing back first into the nearside wall causing detritus to shower the road.

Mr Culley, from St Helens, Merseyside, said: ‘I was very shaken up. I had to pull over to calm down and I didn’t really stop shaking for about an hour afterwards.

‘I’ve only ever seen the aftermath of crashes like that, I’ve never been right in the middle of it.

‘I was driving down the road, listening to my music and spotted the camper passing me. As his back end got near my passenger window I heard a bang.

‘I thought one of my tyres had gone until I saw him swerve. The next thing I knew he lost control and skidded out. I hit my brakes and managed to miss him. 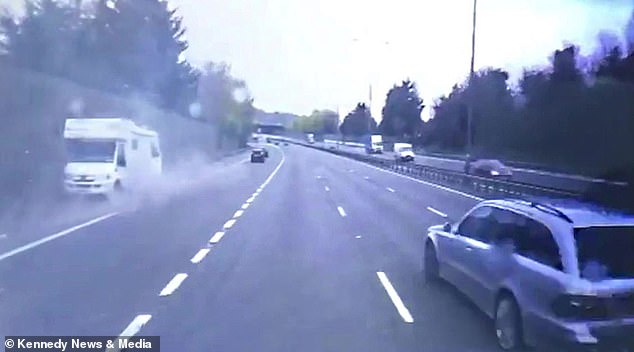 The van came to a halt in the hard shoulder after hitting the boundary wall. It was pointing the wrong direction on the motorway 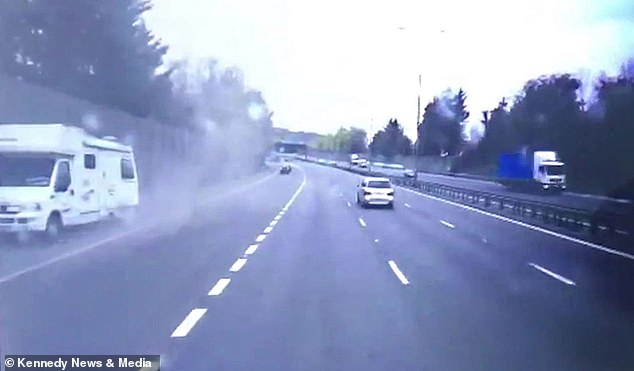 Mr Culley said: ‘If I’d hit him, my lorry would have torn his vehicle in half. If that had happened, I’d be surprised if he would have survived’

‘I was doing 56mph so I would say he was going between 60 and 65mph. I was convinced I was going to go straight through the camper.

‘If I’d hit him, my lorry would have torn his vehicle in half. If that had happened, I’d be surprised if he would have survived.

‘It looked further away on the dashcam but it was only about 100 yards in front of me max. It was really, really close.

‘When I finally managed to come to a stop, my front end was basically in line with his front end, but fortunately he was over on the hard shoulder.

‘I thought he was going to hit the little Corsa in the inside lane but he just missed them. It wasn’t safe for me to pull over and check on them.

‘There was still traffic hurtling past on both lanes either side of me so if I’d stopped I could have caused more accidents.

‘When I drove past the scene a couple of hours later, everything had been moved.

‘By the way the back end smashed into the wall I would assume the van was a complete write off. He hit that wall very hard.’