Campaigners have called for a minimum unit price for alcohol in England after research showed it has worked on reducing consumption in some of the heaviest-drinking households in Scotland and Wales.

A 50p per unit price was introduced in Scotland in 2018 and an in-depth shopping survey has found the policy has had a lasting impact two years on.

And a similar minimum unit price in Wales, brought in around the start of lockdown last year, has also brought positive change, the study which surveyed 35,000 British households found.

Research by Newcastle University and published in The Lancet Public Health showed the greatest reductions overall were seen in the purchase of ciders and spirits.

A 50p per unit price was introduced in Scotland in 2018 and an in-depth shopping survey has found the policy has had a lasting impact two years on. Stock image

The impact was mainly seen in homes that bought the most alcohol – with the exception of high purchasing, very lowest income households, who did not change their habits despite the increase.

The research came amid fears about increased alcohol consumption across the UK during lockdown.

Professor Sir Ian Gilmore, chair of the Alcohol Health Alliance, said: ‘Westminster has said time and time again that it is waiting for evidence from Scotland and Wales on minimum unit pricing – meanwhile, 80 people a day are dying from an alcohol-related cause.

‘The evidence is here – it’s time for the Government to introduce minimum unit pricing in England in order to save lives, cut crime and reduce pressure on our NHS and emergency services.’

Joanne Good, whose daughter Megan died in her sleep aged 16 after drinking strong white cider at a party, said: ‘Alcohol is too cheap and far too often ends up in the hands of children.

‘I fully support any measure that increases the price of cheap alcohol and helps the young and vulnerable.

‘I know the impact cheap, strong alcohol can have on people’s lives, because it has devastated ours.’

The mother from North Tyneside said: ‘It’s clear that minimum unit price is having a positive impact in Scotland and Wales.

‘We really need it here too, now more than ever, after a record year of alcohol deaths and worrying numbers of people drinking more since the pandemic. 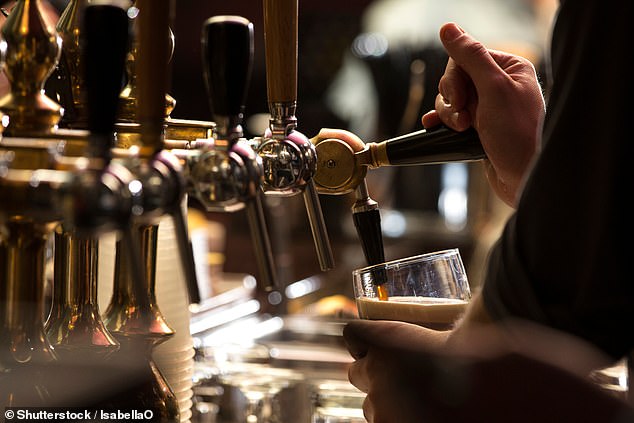 Research by Newcastle University and published in The Lancet Public Health showed the greatest reductions overall were seen in the purchase of ciders and spirits. Stock image

‘MUP is targeted at the pocket money-priced alcohol which causes the most harm and won’t affect the price of alcohol in a pub.’

Professor Peter Anderson from Newcastle University, who led the study, said: ‘Our previous work suggested that the introduction of an MUP in Scotland during May 2018 was associated with an immediate reduction in the amount of alcohol that households purchased from shops or supermarkets.

‘This latest analysis shows that the policy has continued to make an impact, with data showing a sustained drop in overall units of alcohol bought by some of the highest-consuming households, two years on.

‘We can now see that the introduction of an MUP in Wales at the beginning of March 2020 has had a similar impact to the one we saw in Scotland in 2018.

‘It will be interesting to see if this impact is sustained in Wales in the medium term, as it has been in Scotland.’

‘Not only is MUP continuing to have the intended effect in reducing overall alcohol consumption in Scotland, it is those that tended to buy the most alcohol who are most likely to reduce the amount they purchase.’

A Government spokesperson said: ‘There are no plans to introduce minimum unit price in England at this time.’

‘We are committed to systematically addressing the causes of preventable deaths and ill health, including the harmful consumption of alcohol, and this year we have outlined details of the new Office for Health Promotion which will spearhead these efforts.’