Prince Charles and the Duchess of Cornwall appeared in good spirits as they visited the Tower of London today.

Charles, 71, and Camilla, 72, were on hand to mark 535 years since the creation of Yeoman Warders, better known as the Beefeaters.

The royal couple were greeted by six of the ceremonial guardians – who wore their red and gold state dress uniform – as they made their way through the courtyard of the 11th century fortress.

Charles and Camilla were then taken on a tour of the Royal Palace, which is situated on the banks of the Thames. 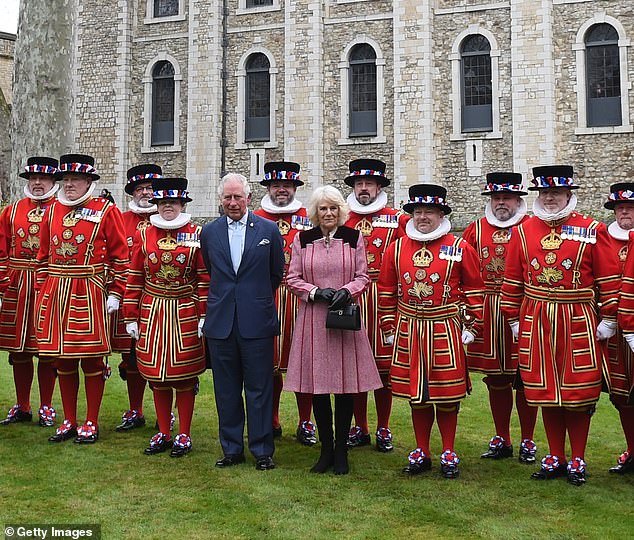 Pictured: The royal couple pose with a group of Beefeaters ahead of the fortress’ White Tower, which was built by William the Conqueror in the early 1080s 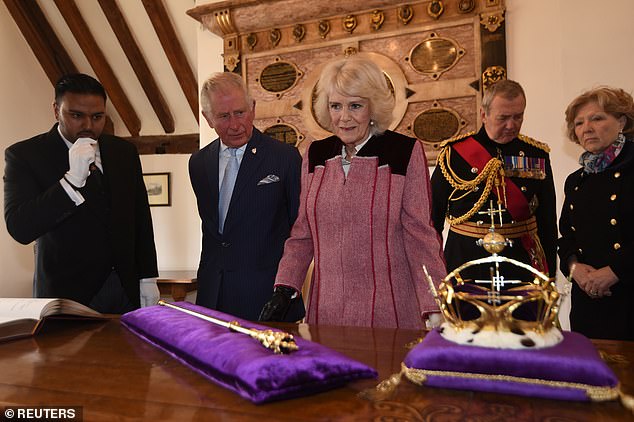 The pair viewed beautiful crown jewels and cut a cake shaped like a lantern as they celebrated the Yeoman Body of 37 men and women, all of whom are drawn from the Armed Forces.

As Camilla cut the cake while Charles and a group of the ceremonial guards stood by, it was joked that someone should get the duchess ‘a job as an executioner’.

She and Charles then posed with a group of Beefeaters at the White Tower, which was built by William the Conqueror in the early 1080s.

Camilla kept the cold away in a chic, pleated light pink and black coat, which she paired with black suede knee-high boots and leather gloves.

Accessorising her outfit, the royal carried a compact black leather handbag and wore a pair of simple pearl earrings for the occasion.

She also carried a transparent umbrella as she shielded herself from the bitter cold rain on the overcast Thursday morning. 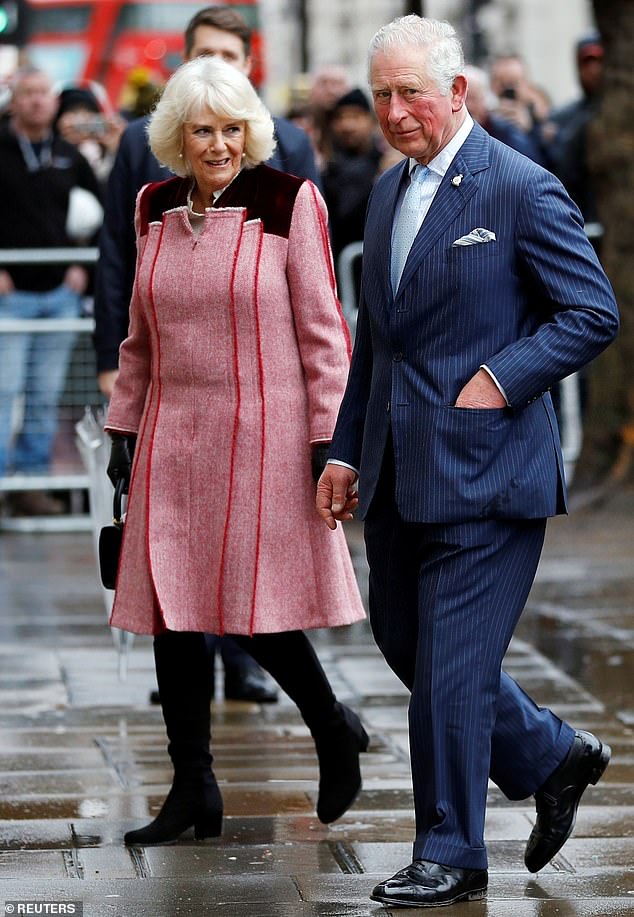 The Prince of Wales, 71, and Camilla, 72, visited the World Heritage Site to mark 535 years since the creation of Yeoman Warders – nicknamed Beefeaters – this morning 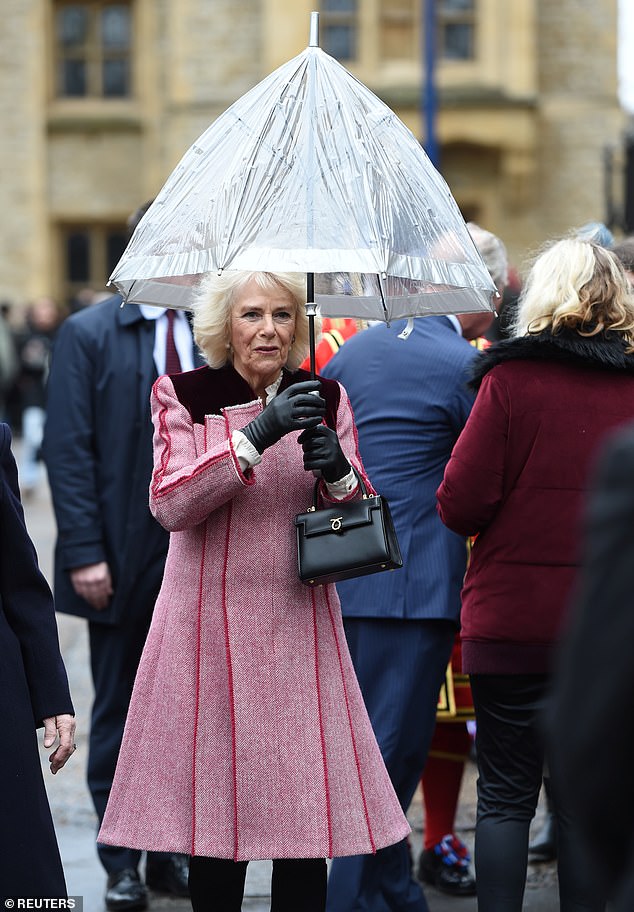 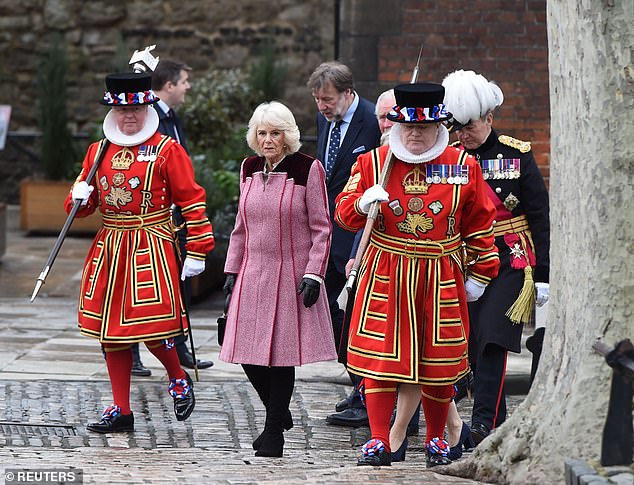 Charles and Camilla were then taken on a tour of the Royal Palace, which is nestled on the north bank of the River Thames in central London 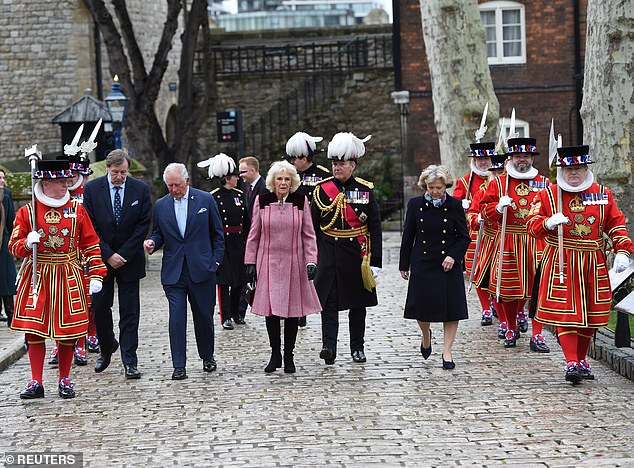 Charles also dressed to impress in a dark blue, pin stripe suit and a classic white dress shirt. He completed his simple ensemble with a powder blue, spotted tie.

The Prince of Wales and Duchess of Cornwall then attended a reception with VisitBritain and VisitEngland to celebrate 50 years of the British Tourist Authority.

The royal visit was to mark 535 years since the creation of Yeoman Warders – a group of 37 men and women who have guarded the Tower of London since Tudor times.

These Yeoman Warders were initially part of the Yeoman of the Guard – the monarch’s personal bodyguard – but Henry VIII decided the Tower needed its own protection when he took to the throne in 1485.

Later in the day, the royal couple visited the Cabinet Office, where they met senior civil servants and their staff and praised their efforts over the past few years. 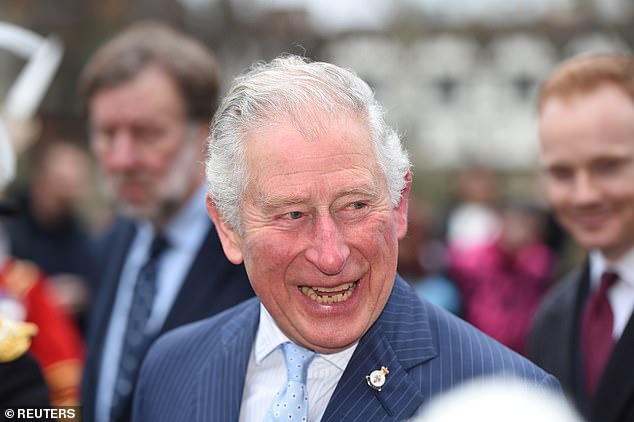 The royal, 71, appeared in high spirits as he and Camilla embarked on a tour of the Royal Palace 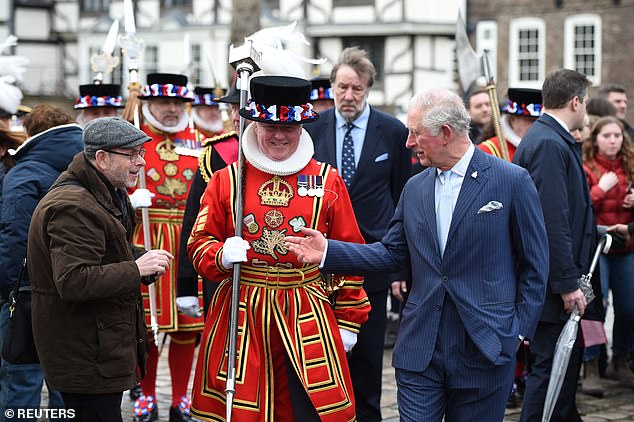 Pictured: Prince Charles greets an onlooker as he arrives at the Tower of London this morning 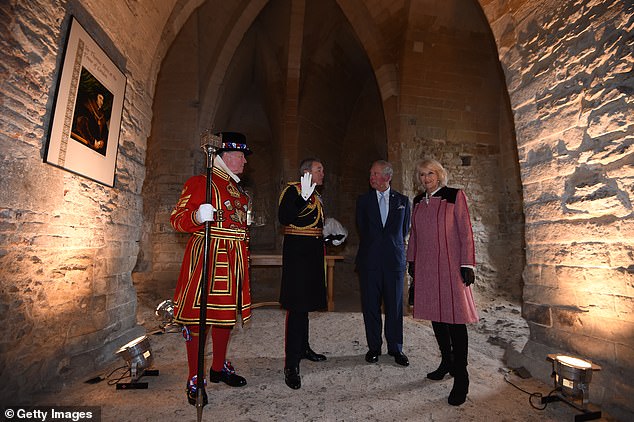 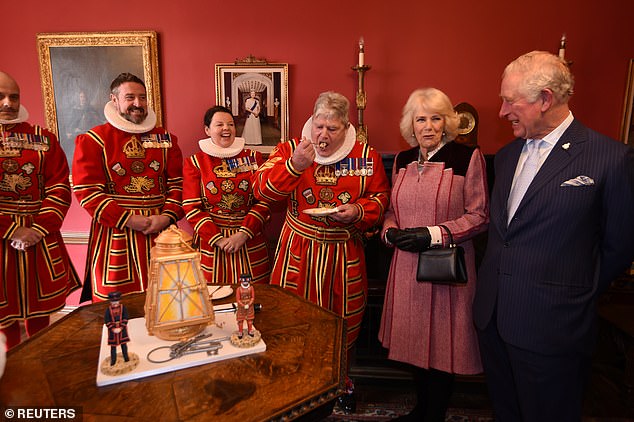 Pictured: Camilla and Charles cut a cake shaped like a lantern as they chat with Yeoman Warders

During the visit, the Prince of Wales joked about visiting the heart of government on the day of Boris Johnson’s cabinet reshuffle – saying he did not want to be in the way.

Speaking to staff at the end of the visit, Charles said: ‘Both my wife and I – we did wonder whether it was quite the most sensible day to come.

‘We did say “please, we don’t want to get in your way” but we were told it was all right.

‘I just want to say for me [it is] fascinating always to see what is happening in the heart of government in the Cabinet Office.

‘When I was much, much younger I remember spending a certain amount of time going round various departments. 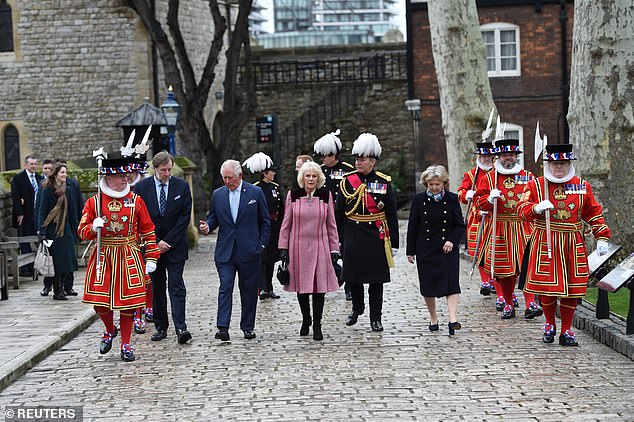 Prince Charles and Camilla, Duchess of Cornwall visit the Tower of London in London 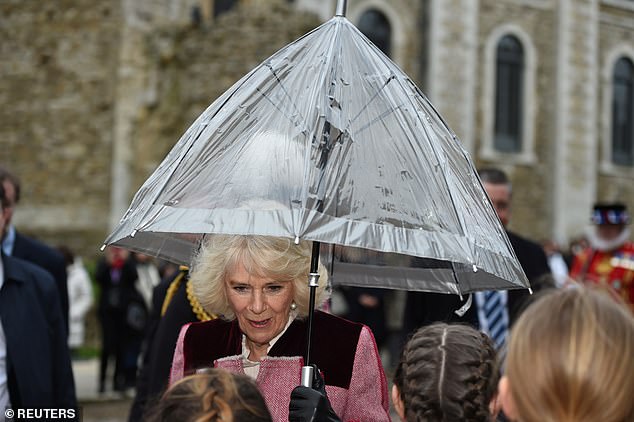 ‘I was even able to spend the whole day at Number 10 with the then prime minister Mr [James] Callaghan, which was fascinating, you can imagine, at that stage in life.’

He went on to say he had great ‘respect and value’ for the civil service, and told the Whitehall workers: ‘I do realise just what an immensely important role you all play.’

‘It’s easy to say that but I do know that it’s so dependent on all of you working in teams and then as one great big team.’

In a lighter moment during the visit, Camilla became smitten with Monty, a West Highland terrier, who works in national security communications at the Cabinet Office.

The duchess is a well-known dog lover and tickled the dog behind its ears as it was held by Darragh McElroy, head of national security communications. 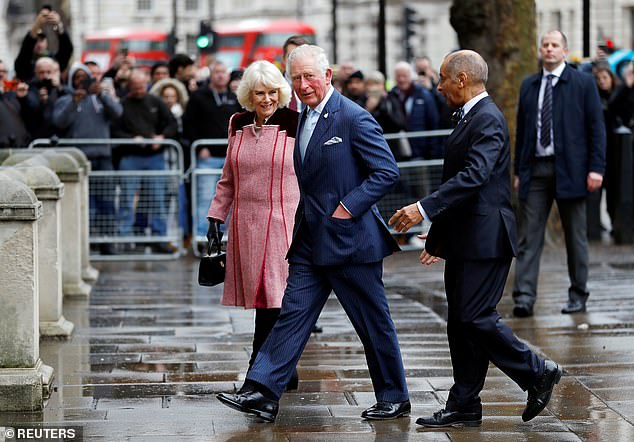 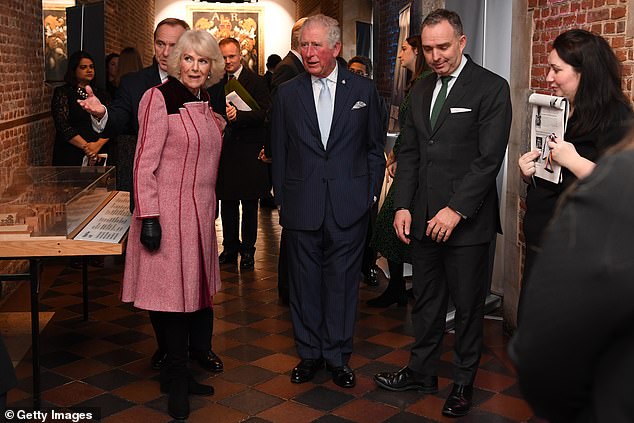 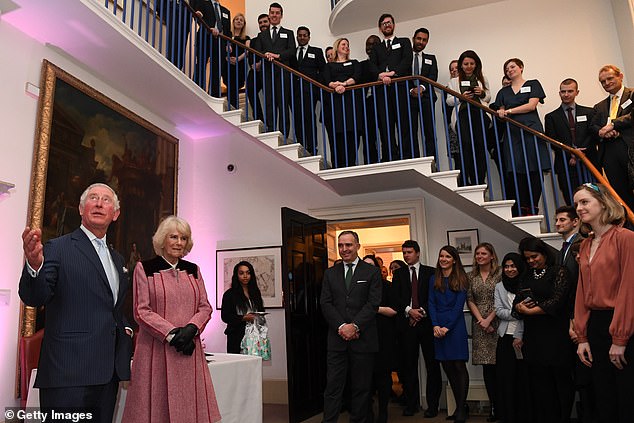 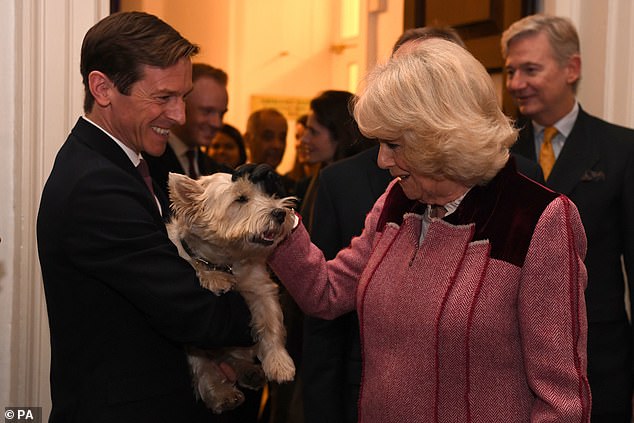 Camilla became smitten with Monty, a West Highland terrier, who works in national security communications at the Cabinet Office

He said: ‘The duchess said “does he come here every day?” and I said yes, he works in national security looking after us all, keeps us all calm – he’s a good therapy dog.’

The royal visit comes after Prince Charles and Prince William bonded over wheelchair basketball as they joined Kate Middleton and the Duchess of Cornwall for their first joint appearance in nine years on Tuesday.

Playful Prince William, 37, tried his hand at the sport while meeting injured military personnel on a visit to the new Defence Medical Rehabilitation Centre (DMRC), Loughborough.

Hoping to help his son score, Charles pushed William towards the basket and was on hand with a boosting shoulder rub when the first two shots were unsuccessful. Father and son were also joined in celebration when the Duke of Cambridge finally did score, with both princes throwing their hands up in delight.

Charles, Camilla, William and Kate toured the facility, including the gym and the prosthetics workshop, on their first official outing since a charity concert in 2011. 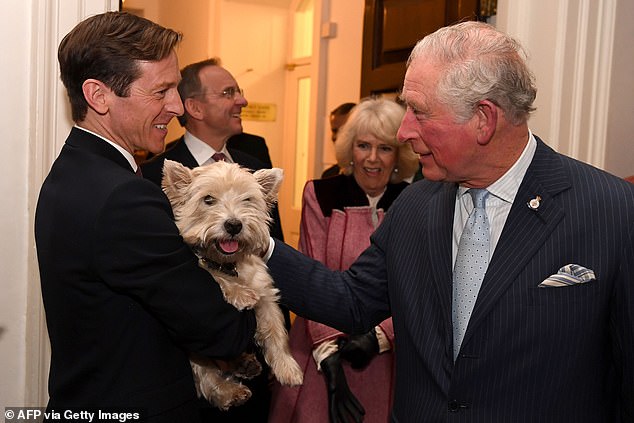 Pictured: The Prince of Wales meets West Highland terrier Monty during the visit, as he is held by Darragh McElroy, head of national security communications