Sir Nicholas Soames has suggested that Cambridge University’s Churchill College should not be allowed to use his grandfather’s name if it continues to ‘smear’ it.

The former Tory Minister’s comments came after the college held an event called ‘The Racial Consequences of Churchill’, during which a panellist said wartime leader Sir Winston was the ‘perfect embodiment’ of ‘white supremacist philosophy’.

The event also included claims that the British Empire was ‘far worse than the Nazis’.

Sir Nicholas, who stepped down as an MP in 2019, said: ‘The college benefits enormously from Churchill’s name. If they traduce it, should they be able to have their cake and eat it?’

His comments came in a foreword to a paper by the Policy Exchange think-tank, co-authored by Churchill biographer Andrew Roberts, who accused the college of ‘clearly premeditated malice and character assassination’ of the former Prime Minister.

The Cambridge event, held this month, was billed as a ‘critical re-assessment of Churchill’s life and legacy in light of his views on empire and race’.

Panellists included Kehinde Andrews, professor of black studies at Birmingham City University, who said Churchill ‘wasn’t even that popular’ in his lifetime.

Mr Andrews added: ‘White supremacy is still the politics of the day, it just looks a bit different.’

Sir Nicholas criticised the ‘idiotically sloppy’ event, which he said marked a ‘new low in the current vogue for the denigration in general of British history and of Sir Winston Churchill’s memory in particular’. 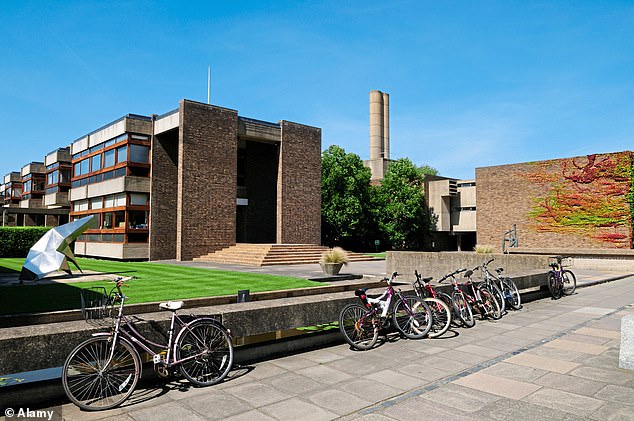 The college held an event called ‘The Racial Consequences of Churchill’, and made claims that the British Empire was ‘far worse than the Nazis’

He writes in the paper: ‘If there was one academic institution in the world that one would hope and expect would give Churchill a full and fair hearing – rather than give a platform to those who overlook his astonishing contribution to the defeat of the most murderously racist regime in all history – it surely should be Churchill College Cambridge, named in my grandfather’s honour and now home to his personal papers and one of the world’s most important archives.

‘It really seems to me that Churchill College should be defending his remarkable legacy, not allowing detractors to smear him unchallenged.

‘I am very worried, given these circumstances, about the direction Churchill College seems to be taking.’

No one could ever have expected this latest ‘trashing’ of Churchill’s reputation, he said.