Thousands of students turned up at a park for an annual drinking event – with some seen urinating up trees and others vomiting.

The booze-fuelled ‘Caesarian Sunday’ event shouldn’t have happened on Jesus Green in Cambridge because of Covid restrictions – but crowds gathered anyway.

Witnesses said there was chaos as students lit barbecues, ignored social distancing rules and drank until they were sick.

The event is at least eight decades old and usually takes place on the Sunday of the first May bank Holiday weekend.

In the past, the gathering has been criticised for causing havoc, with masses of litter left lying around and people becoming ill from the amount they have drunk.

Pictures taken on Sunday show thousands of students stood and sat in groups on the green, with men urinating into waterways and up against trees while the grass was strewn with plastic bottles and beer cans. 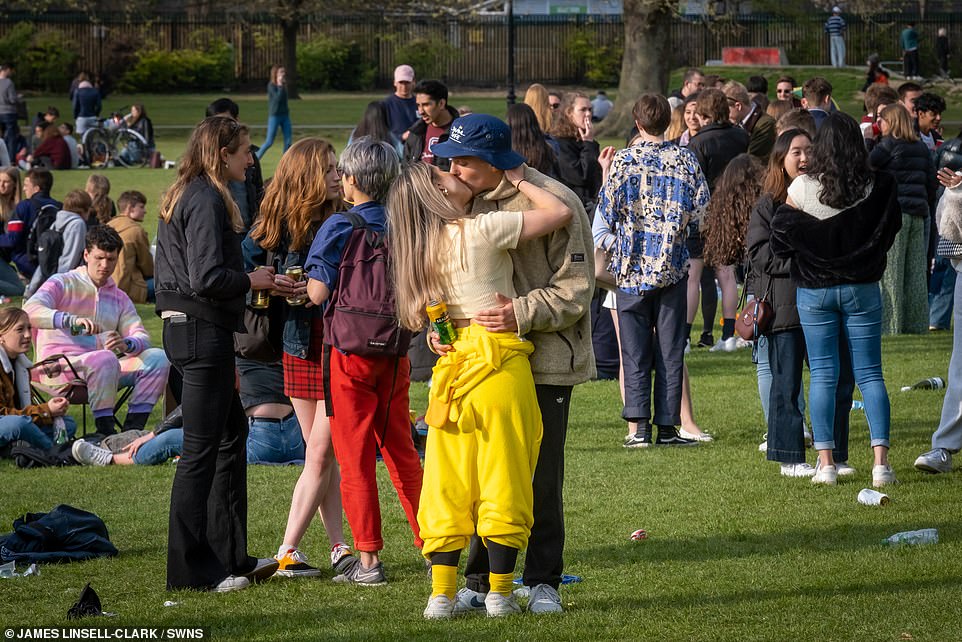 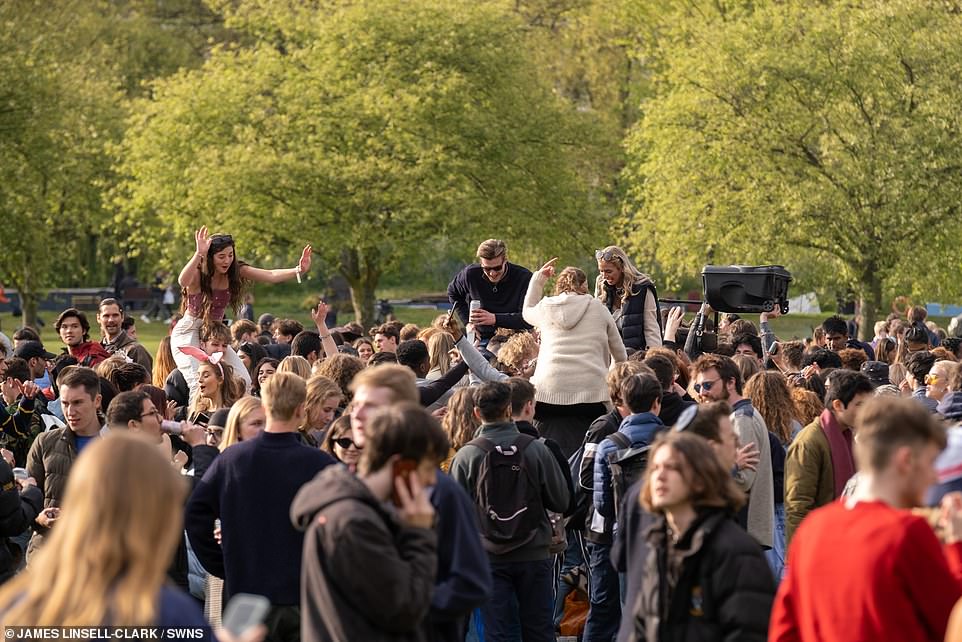 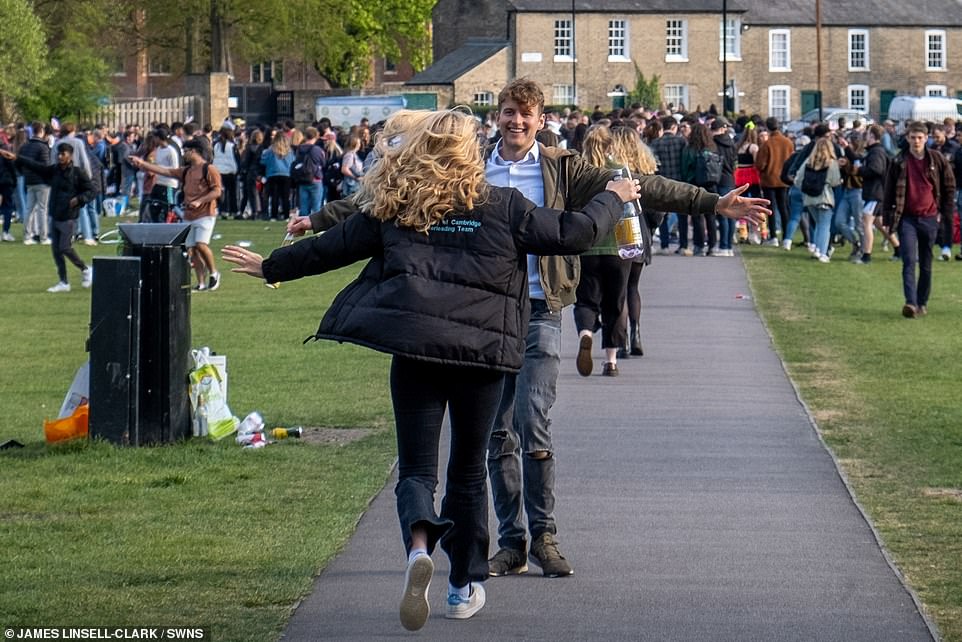 Witnesses estimated that up to 3,000 students gathered on the green this Bank Holiday

Several police officers can be seen talking to people in the crowds, but one witness said not enough had been done to move people on.

One witness said the event was ‘like a rave’ with loud music blaring out and drunken people dancing.

Another said: ‘Police were doing absolutely nothing to move people on. It was a joke.

‘There were lots of men and women urinating by the trees on the path in front of passing public.

‘Young women were vomiting from too much drink. I spoke to two police officers who said as you can imagine we can’t exactly get involved. 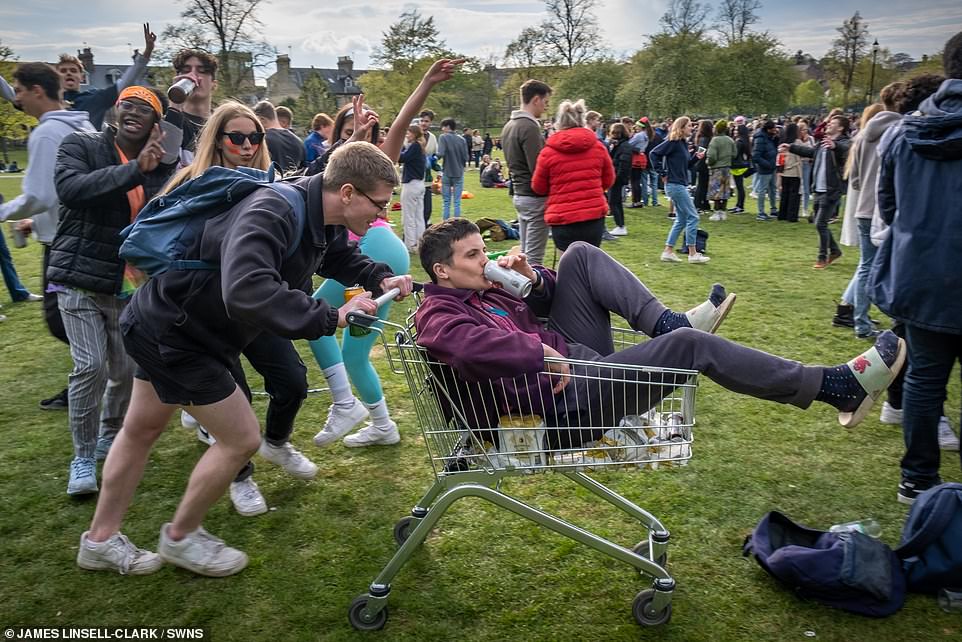 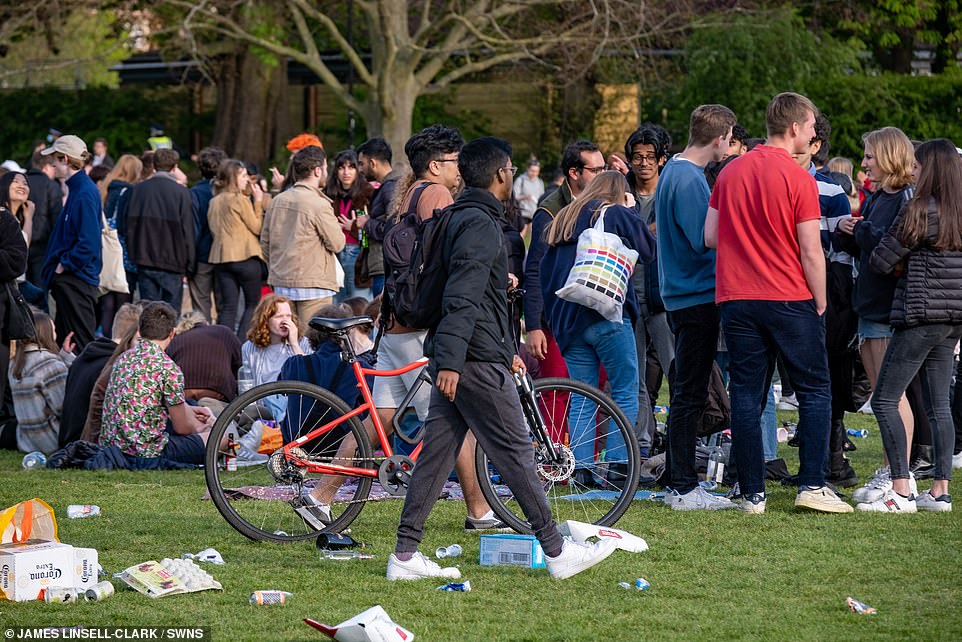 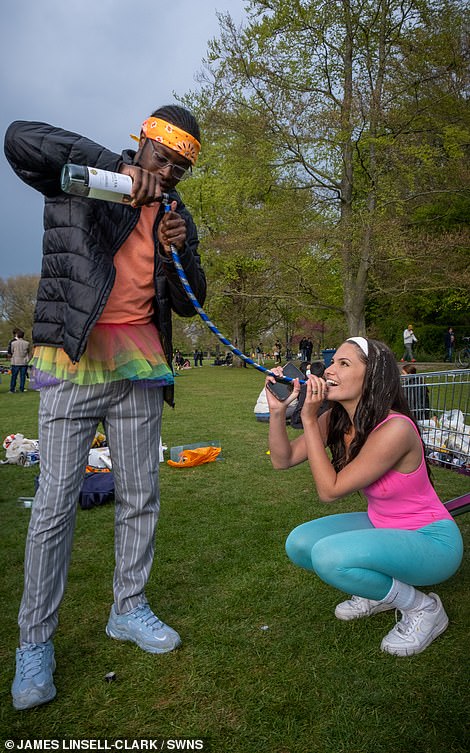 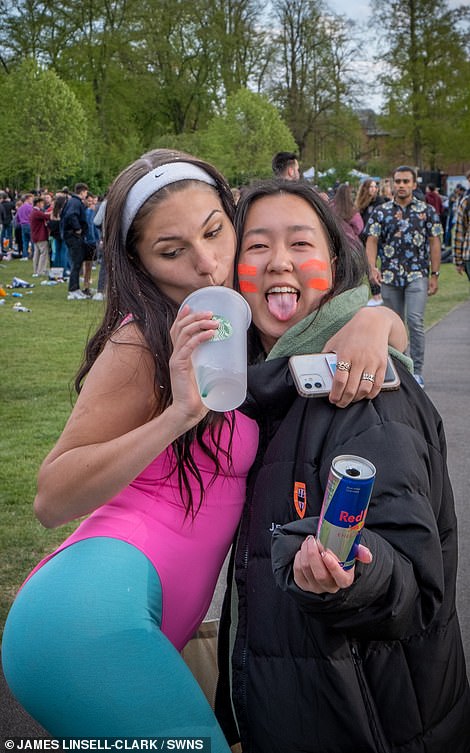 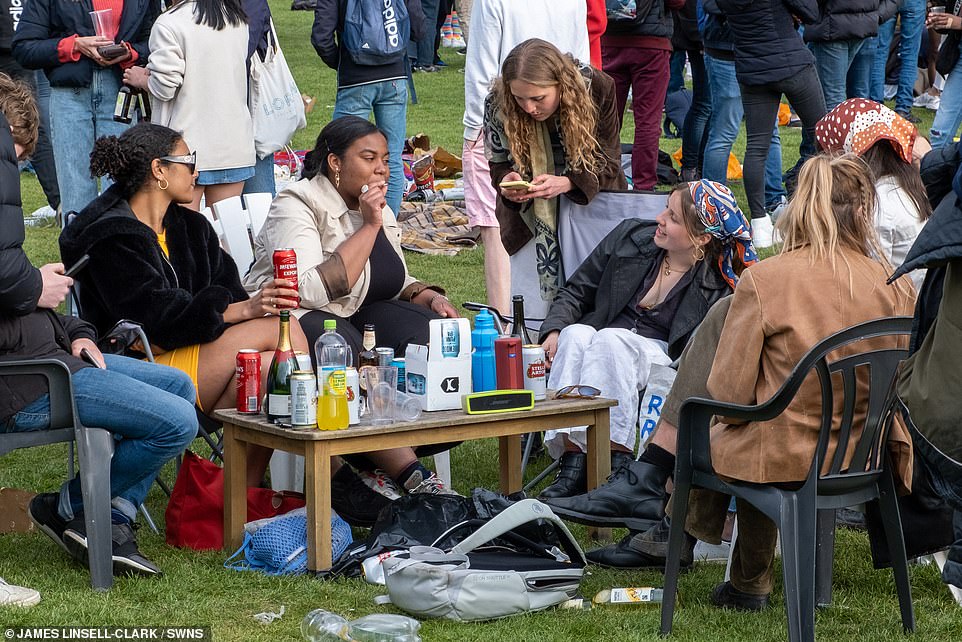 Often described as the birth of the summer drinking parties, it historically takes place at a park in Cambridge’s city centre, on the first bank holiday of the summer term.

It is said to have started when a member of the Green Giants stole a bottle of Pimm’s from a Caesarian.

The bottle was then thrown at the Caesarian in a challenge to fight.

However, reports suggest the fighting element was banned several years ago but the event remains seen as an opportunity for students to get drunk before knuckling down to focus on revision and exams in the final term.

‘At the peak maybe 3,000 people there and there were no masks and no social distancing.’

The event – which often attracts undergraduates in fancy dress – has previously been criticised due to the antisocial behaviour associated with it.

Named after the university’s Caesarean drinking society, the event used to see the Caesareans descending on Jesus Green to have a brawl with the Girton Green Monsters – one of Cambridge University’s most notorious drinking societies.

The brawl was officially banned several years ago but the event lives on and it is still seen by Cambridge University students as a final opportunity to get drunk and spend time with friends before they have to focus on revision and exams during the final term.

Caesarean Sunday is seen as the birth of the drinking parties for the summer term, which ends with the notorious after-exams party, Suicide Sunday, in June.

Most colleges are known to issue warnings to their students one way or another.

Some colleges, such as John’s, have been known to ban their students from going altogether.

Also known as C-Sunday, the event has hit headlines in recent years for the students’ antics.

In 2016, a student dressed up as a sheep suffered severe burns after his fancy dress costume was set on fire, reportedly as part of a drinking society ‘initiation’.

He threw himself into the river to extinguish the flames before an air ambulance rushed him to hospital.

City council leader Lewis Herbert has since threatened to ban the event, which is seen by some students as a final blowout before the summer exam season.

Attending in 2017, he said: ‘From being there Sunday afternoon, it is clear that the spirit was good this year and the vast majority of the large crowd of partying students were behaving sensibly. 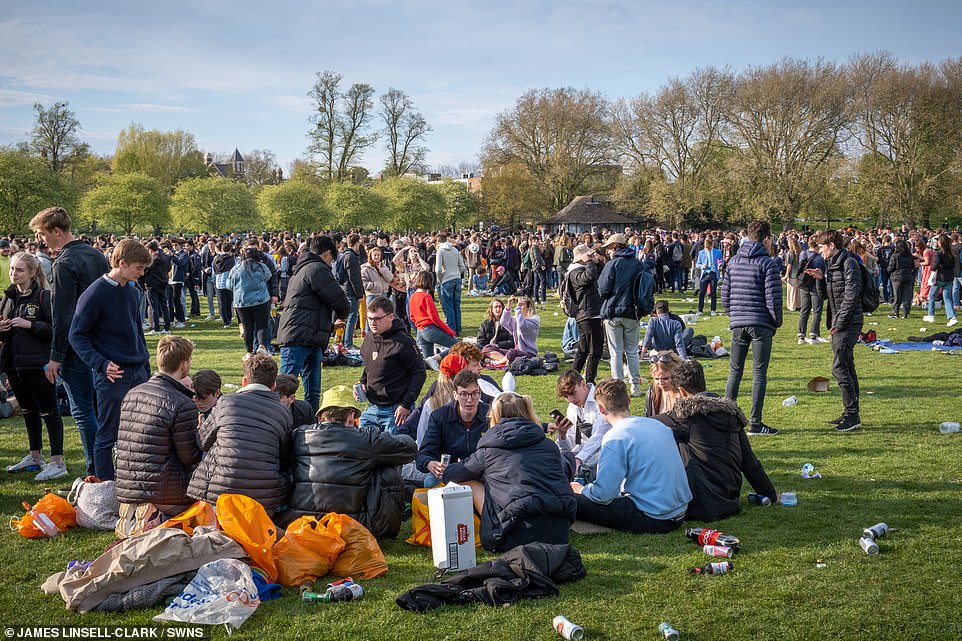 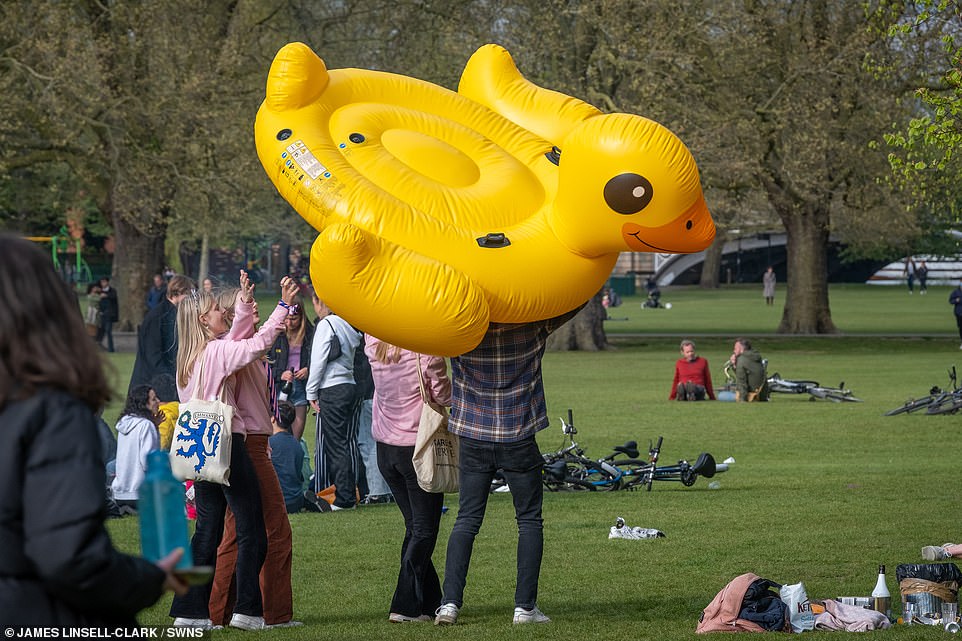 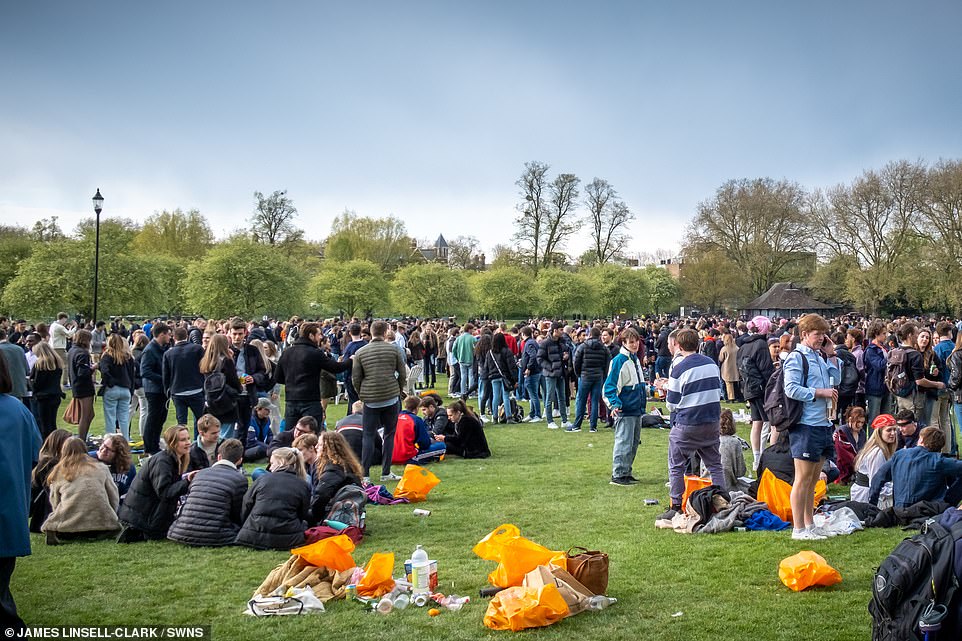 While the event used to see students fight each other in the name of tradition, this was banned about seven years ago 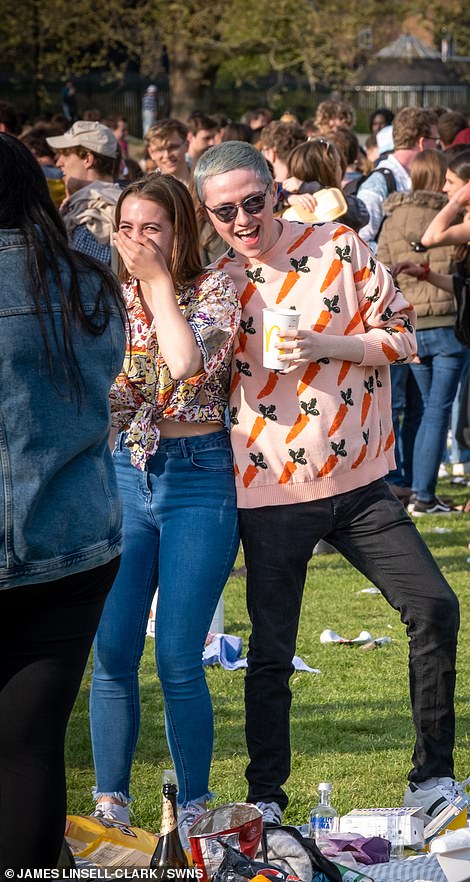 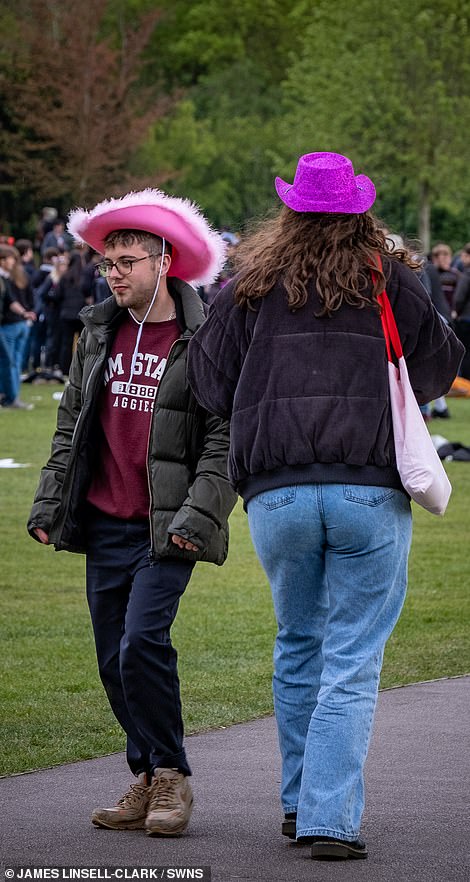 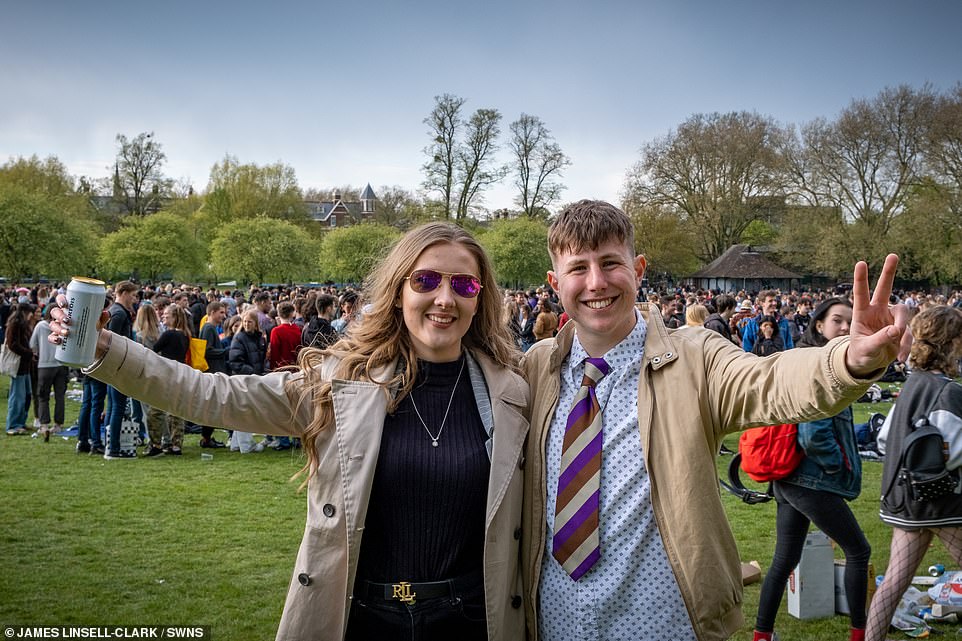 ‘Students should be able to regulate their behaviour as a group, assisted by Cambridge University and colleges reinforcing expectations, and the local police team there just in case.

‘While welcoming that most antisocial behaviour seems to have been avoided, there is still a significant clean-up cost every year and revellers need to better consider other users of Jesus Green.

‘We also want to thank in advance our cleansing teams who will now follow up to ensure that Jesus Green is spick and span and recovers as soon as possible.’