There have been more than 1,000 outbreaks of coronavirus in educational settings since schools reopened in September, the Government’s scientific advisers have suggested.

An outbreak or cluster is classed by Public Health England (PHE) as two or more positive cases of Covid-19 related to one setting.

A document released by the Scientific Advisory Group for Emergencies (SAGE) today said PHE indicated this had occurred at least 1,000 times in educational settings in England since September.

The way PHE reports the data does not detail how many people were infected in each incident.

For comparison, around 173 clusters or outbreaks involving two or more cases have occurred in hospitality venues, like pubs or restaurants, according to PHE surveillance reports.

SAGE clarified there is no direct evidence that transmission within schools plays a ‘significant contributory role’ in driving increased rates of infection among children. But it added ‘neither is there direct evidence to suggest otherwise’.

It said secondary school children played a ‘significantly higher role’ in spreading the virus between households between September and October — when the second wave began taking hold in Britain — compared to in the summer.

There have been more than 1,000 outbreaks of coronavirus in educational settings since schools reopened in September. Pictured: A child at school at Arbours Primary Academy in Northampton, on September 2

The SAGE document, dated November 4 and published this afternoon, evaluated evidence on the role of children in the pandemic.

It said there is less evidence younger children are driving infections.

SAGE said: ‘There is some evidence from contact tracing studies that pre-school and primary aged children are less susceptible to infection than adults (low-medium confidence).

‘The evidence is more mixed for secondary aged children and older children seem to have similar rates to adults.’

The paper claimed children could ‘clearly’ bring infection into the household and transmit to other household members.

Data from the Office for National Statistics (ONS) showed that there were instances only a child had tested positive in a household, which suggested they were the one bringing it into the home, as opposed to a parent.

However, this doesn’t necessarily mean that they caught the coronavirus from their school.

And the data tends to suggest children are more likely to catch the coronavirus from a household member than a friend or teacher.

SAGE argued that the role of schools in community transmission ‘cannot be easily considered in isolation from wider measures’.

Potential increases may emerge because opening schools enables other mixing to occur – such as parents being able to go to work, or socialising after dropping off children.

SAGE has said there is low risk to children of suffering severe clinical disease from Covid-19 but there are ‘significant educational, developmental and mental health harms’ to children from schools being closed.

It adds there is some evidence that epidemic growth restarted before the reopening of schools. 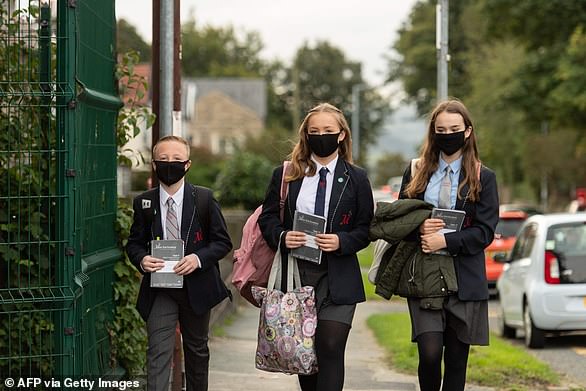 It comes after Dr Susan Hopkins, deputy director of Public Health England (PHE), said on November 2 children were ‘clearly most likely’ to catch the coronavirus in their home.

Speaking on Times Radio Breakfast she said: ‘We know that, over the summer, families and people have been all back in work and going out and socialising, so there are many routes of infection and bringing it into the household.’

Schools, colleges, nurseries and universities will remain open during England’s month-long lockdown — which began on November 5.

But there has been resistance from teachers and their unions.

Paul Whiteman, general secretary of school leaders’ union NAHT, said today: ‘We remain particularly concerned about the spread of the virus amongst older pupils and in secondary schools, especially given that we know that the prevalence of the virus has risen significantly since schools re-opened fully.

‘There are also worrying signs that older pupils could be playing a role in spreading the virus amongst family members, and this must be watched very closely.

‘Overall, it remains the case that all education staff are being asked to remain on the front line and it is incumbent upon the Government to do more to ensure that all pupils and staff are kept safe.

‘Routine testing and priority access to seasonal flu jabs are just two examples of how they could do this.’

Dr Mary Bousted, joint general secretary of the National Education Union, said: ‘We call on the Government to play a much more active role to suppress the transmission of Covid-19 within schools.

‘The situation is untenable and widespread disruption will continue unless the Government takes steps to get coronavirus under control in schools.’

The National Education Union’s campaign to close schools and colleges as part of the one-month lockdown has gained more than 150,000 teachers backing.

Kevin Courtney, joint general secretary of the NEU, said the Government was ‘failing communities’ by keeping schools open because there has been ‘a fifty-fold increase in infections in secondary schools alone since September’.

Mark Woolhouse, professor of infectious disease epidemiology, University of Edinburgh, and member of SAGE, argued ‘no major outbreaks’ have been reported in UK schools to date.

He said today: ‘Even small outbreaks in schools are more likely to involve the staff than the children.

‘There are no signs that the re-opening of schools in August (in Scotland) and in September (in England) has caused a significant public health problem.’

‘First, older schoolchildren are testing positive in surveys at a higher rate than any other group except young adults. This is not surprising given that schools are operating much closer to normality than most other parts of society.

‘Second, there is evidence that children are quite frequently bringing infection into households (without necessarily infecting anyone else). This is not surprising either; it follows from the first point.

‘A key question is whether transmission within schools is driving the epidemic and keeping R above 1.’

Dr Sarah Lewis, a senior lecturer in genetic epidemiology, University of Bristol, noted a recent research finding that teachers were no more likely to catch the coronavirus than in other professions.

She said: ‘[It] suggests the measures in place to reduce transmission in schools are working. It is also a positive development that the R-rate is now below one in Scotland, even though schools have remained opened since August.’

She added: ‘As anticipated by many scientists, this report shows with greater mixing, children are more likely to contract the virus, and they can transmit it, although evidence still suggests they are less susceptible than adults particularly younger children.

‘It is comforting to see that even with much more data the risk to children of having severe consequences from the virus is extremely low.’

Last week, all students and teachers in secondary schools and colleges in England were told to wear face coverings when moving around the premises under Government guidance.

It came after a leading medical figure warned that not closing secondary schools could lead to a longer lockdown in England.

Education unions attended a Department for Education (DfE) meeting, alongside PHE representatives, on Thursday to discuss data on transmission in schools.

A Department for Education spokesman said: ‘The chief and deputy chief medical officers have been clear the balance of evidence is firmly in favour of schools remaining open, and have highlighted the damage caused by not being in education to children’s learning, development and mental health.

‘Children are at very low risk from the virus, and staff are not at higher risk than those working in other sectors.

‘We have strengthened the already rigorous measures schools are following to reduce transmission of the virus, including requiring face coverings in all secondary schools in communal areas outside classrooms.’