New York’s two-billion-dollar marijuana industry is under fire for hawking child-friendly products such as candies and flavored vapes.

Experts today called for restrictions on selling locations and higher penalties for illegal shops, saying the situation is spiraling out of control and has become a ‘danger’ to communities.

A staggering 1,400 shops in New York City are selling cannabis products illegally, creating what legislators and anti-legalization activists have called the ‘Wild West.’

Products designed to look like Sour Patch Kids, Doritos, and other popular snacks have been able to remain on store shelves thanks to the state’s lackluster enforcement tools – creating a surge in accidental poisonings among children. 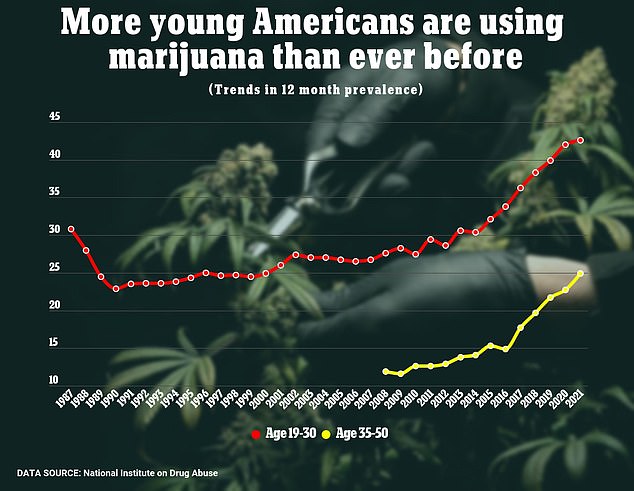 Luke Niforatos, Executive Vice President at the anti-cannabis legalization group Smart Approaches to Marijuana told DailyMail.com: ‘People hear about this wild west of literally thousands of different kinds of youth appealing products. And they think, well, let’s just write laws to regulate that. Well, every single state that’s legalized marijuana has in their law [that] companies cannot make products that appeal to youth and yet we have these products anyway.’

Mr Niforatos said the problem is not only a lack of comprehensive laws on the books. It’s politicians’ minimal wherewithal to confront the offending companies.

‘The state governments are not regulating the industry appropriately because they can’t or there’s not the political willpower to do it. And the industry is so well financed, they have the best lobbyists and the best lawyers who dance circles around what’s written in this legislation.’

Just one dispensary in New York City is operating with the proper licensing and authorities unable to do much more to shut down the rogue cannabis clubs.

Sheriff Anthony Miranda and other law enforcement officials complained about weak penalties at a City Council hearing on Wednesday, noting that existing laws make it difficult to immediately close illicit shops and often can issue only measly $250 fines for selling cannabis without a license.

Sheriff Miranda said: ‘There’s a lot of marketing that’s going to children. There’s a lot of public health issues, danger to the community. We want to make sure they’re in compliance.’

Child-friendly packaging is rampant in the US. A study out last year of 256 photos of cannabis-infused edibles packaging sold in 24 states, D.C., and Puerto Rico from May 2020 to August 2021 found that 15 percent of the packaging were knockoffs of brand-name products.

Features that would appeal to children such as characters and creatures, flavor images, and flavor text were present on 23 percent, 35 percent, and 91 percent of labels, respectively.

In New York, recreational marijuana was legalized in March 2021. The law included a provision that explicitly forbids marketing and advertising that ‘is designed in any way to appeal to children or other minors.’ 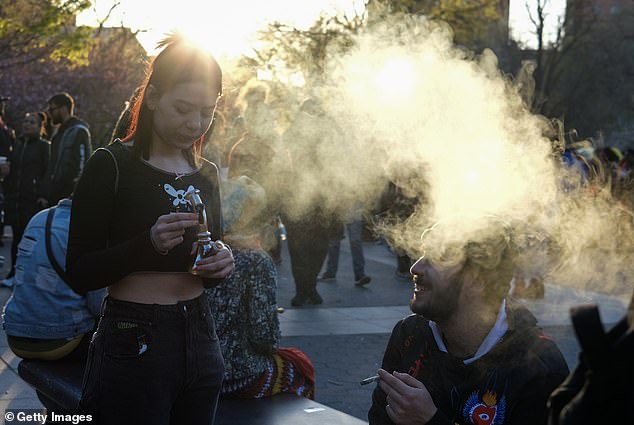 But the state’s Office of Cannabis Management has not enacted specific rules on labeling, packaging and advertising that could ban cartoons and neon colors, nor prohibited depictions of food, candy, soda, drinks, cookies or cereal on packaging.

This has left it struggling to keep up with the roughly 1,400 dispensaries in the city still selling these products without a license to operate.

Mayor Eric Adams, a Democrat, authorized a task force in November to try and stop the wave of makeshift marijuana sales, with a two-week sting seizing $4.1million from 53 locations and fining them up to $50,000.

‘The taskforce has continued,’ Sheriff Miranda said. ‘It did not stop after two weeks. We regrouped. We analyzed the information that we received, and now we’ll continue to go out.’

However, he added that the smoke shop owners were now creating a whisper network to warn people of raids.

The NYPD reported finding the most of the 1,321 illegal dispensaries in Brooklyn, with 428. There have been 373 located in Manhattan, 226 in Queens, 204 in the Bronx and 90 on Staten Island.

Dr Linda Richter, Vice President of Prevention Research and Analysis at the Partnership to End Addiction said: ‘While most state governments that have legalized marijuana have some provisions in their laws to protect kids from accessing and ingesting these products, most are vague and inadequate and, as we’re seeing in New York and other states that have legalized, rarely enforced.’

DailyMail.com contacted the New York Office of Cannabis Management for comment but did not receive a response.

Meanwhile, the legal cannabis industry is booming with a market size hovering around $11 billion. It is projected grow further as laws governing the drug’s use change. Twenty-one states and the District of Columbia have legalized the recreational use of cannabis in adults, a major shift in the legal landscape that has produced an explosion of marijuana retail shops.

The industry likely will not slow down any time soon, though activists are warning that if left unchecked, it could become a public health issue to rival the youth nicotine vaping epidemic. They are already seeing the signs that the marijuana industry is fomenting a new public health crisis of children using the drug as often as everyday.

Dr Richter said: ‘When it comes to flavored marijuana, all the same warning signs are there for those willing to see them… Accessing edibles and flavored marijuana vapes is easy for young people, as is hiding their marijuana use from adults, given the discreet nature of these products. The flavors confer a sense of harmlessness to young people and few have any sense of the dangerous potency of these products.’

Advertising of marijuana products should at least have the same restrictions as those imposed on cigarettes, Dr Richter said. This includes being banned near locations where young people often go as well as on entertainment, print, and social media outlets.

She added that colorful packaging, child oriented product names, attractive flavors, and edibles that resemble common snacks should also be banned across the board:

‘While proponents of legalization tend to put the burden on parents and schools to protect kids from commercialized addictive substances, and whereas parents and schools certainly do play an important role in prevention, the burden should rest on governments choosing to legalize marijuana to ensure that kids are not exposed to flavored, child-appealing products and that their access to these products is truly restricted.’