Doctors say California is currently experiencing a ‘viral tsunami’ with COVID-19 cases surging by a staggering 68 percent in the past two weeks alone and ICU beds now at capacity in the southern part of the state.

California surpassed 2 million recorded cases of the deadly virus earlier this week, but experts predict that number will rapidly rise as residents gather to celebrate Christmas and New Year.

‘We could have a surge on top of surge on top of a surge in January and February,’ Gov. Gavin Newsom stated on Thursday, as he urged residents to celebrate the festive season at home.

But many in the state are failing to heed his directive, and a new survey from hard-hit Los Angeles County indicates that a third of the area’s 10 million residents are still gathering with people from outside their household.

‘People have grown less sensitive to increasing case rates, less sensitive to the risk than at the start of the pandemic,’ Kyla Thomas, a sociologist from the University of Southern California’s Center for Social and Economic Research, told The Financial Times on Friday.

The result is a medical system at breaking point. 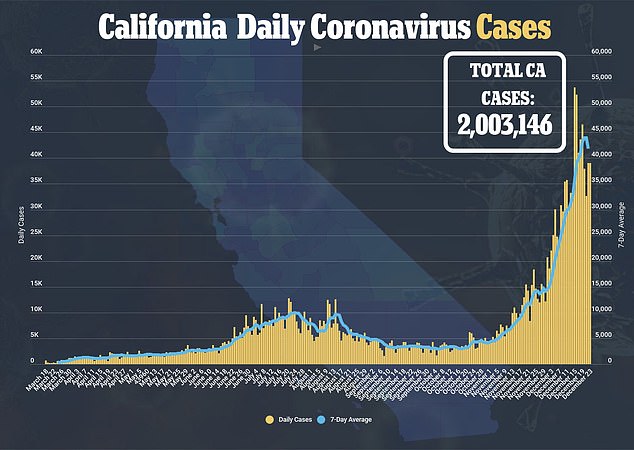 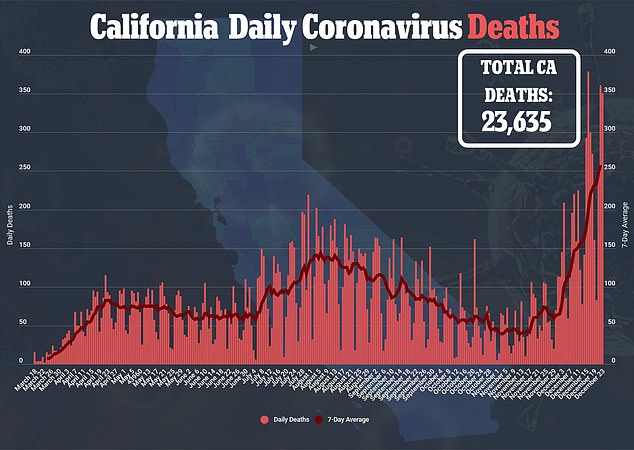 As of Thursday, California had record numbers of COVID-19 patients in the hospital and in ICUs, at nearly 19,000 and nearly 4,000, respectively.

On the same day, hospitals in LA County were diverting ambulances and leaving patients unattended for hours. County health officials sent out a memo to doctors urging them not to send patients to emergency rooms unless it was absolutely necessary.

There is also a drastic shortage of nurses and other medical personnel, and California’s leaders are reaching out to Australia and Taiwan to fill the need for 3,000 temporary healthcare workers.

Dr. Brian Gantwerker, who works in LA County, told the Financial Times he ‘dreaded what the next several weeks would hold for Los Angeles’.

He and other physicians fear that they will have no choice but to ration care.

ICU beds are already completely full but, if current trends continue, the number of people hospitalized with COVID-19 could double in the next 30 days.

While the number of people contracting COVID-19 and being hospitalized with the virus is surging in LA County, so too is the death rate.

At present, an average of 91 residents are dying each day from COVID, up from an average of 10 per day at the beginning of last month. 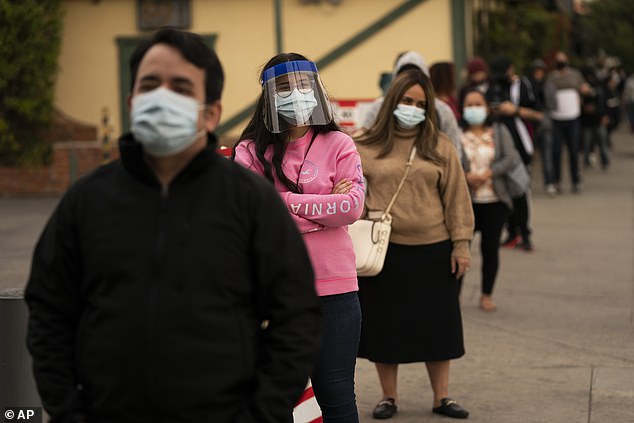 Residents of Los Angeles County line up to be tested for COVID-19. At present, an average of 91 LA  residents are dying each day from COVID, up from an average of 10 per day at the beginning of last month 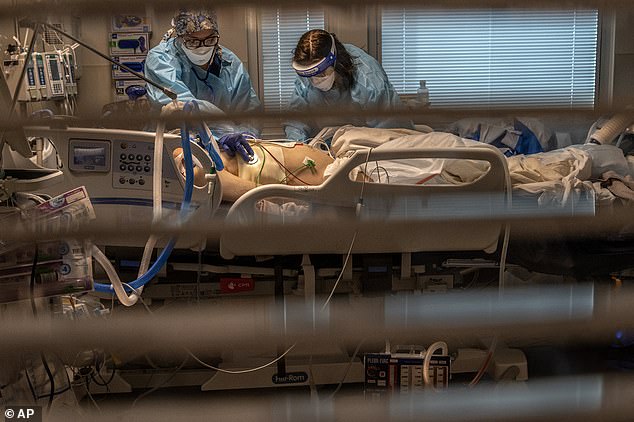 A COVID patient is pictured in the ICU earlier this week. There are now no spare ICU beds in all of Southern California

Despite the grim news, people in LA are leaving home to attend church services for Christmas.

The Roman Catholic Archdiocese of Los Angeles was permitting limited indoor services, although it also urged churches to avoid them in favor of outdoor or online services.

The Cathedral of Our Lady of the Angels held Christmas Eve Masses and planned indoor Christmas Day Masses, as well.

It comes as more than 120,000 Americans will spend Christmas Day in hospital battling COVID-19.

While California remains the epicenter of the virus crisis, dozens of other states are still struggling to contain the number of infections and hospitalizations.

More than 120,00 people across America will spend Christmas Day in hospital battling the virus, according to The COVID Tracking Project. 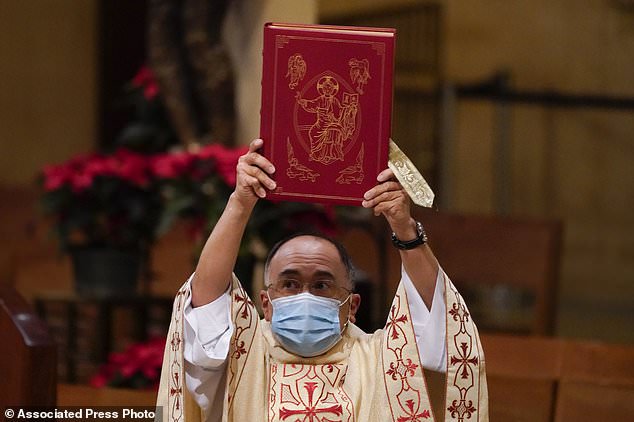 The Roman Catholic Archdiocese of Los Angeles was permitting limited indoor services for Christmas. Father David Gallardo leads Christmas Eve Mass at Cathedral of Our Lady of the Angels 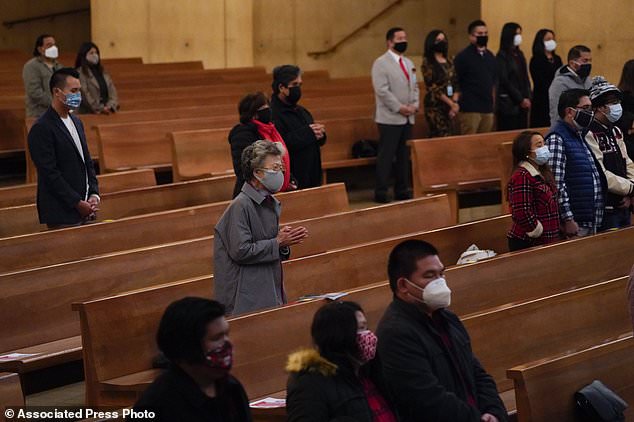 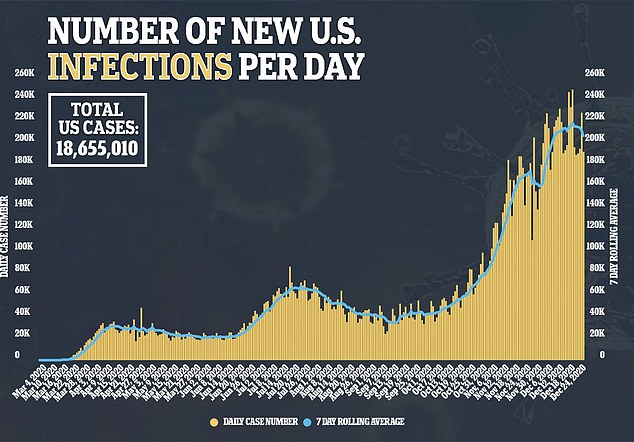 Cases numbers also continue to soar, with more than 18.65 million US citizens testing positive for the virus.

Meanwhile, a staggering 329,106 Americans have now died from COVID-19.

California recorded 394 new deaths on Thursday, while the death rate is also surging in Pennsylvania.

That state reported 245 new deaths in the 24 hours to Christmas Day.

Meanwhile,The University of Washington’s Institute for Health Metrics and Evaluation (IHME) released its latest projections for COVID-19 deaths, showing that the death toll could reach 731,151 by April 1 without a vaccine rollout and other health measures.

However, the model currently projects that there will be a death toll of 567,195 by April 1 with mandates and vaccines continuing as planned. 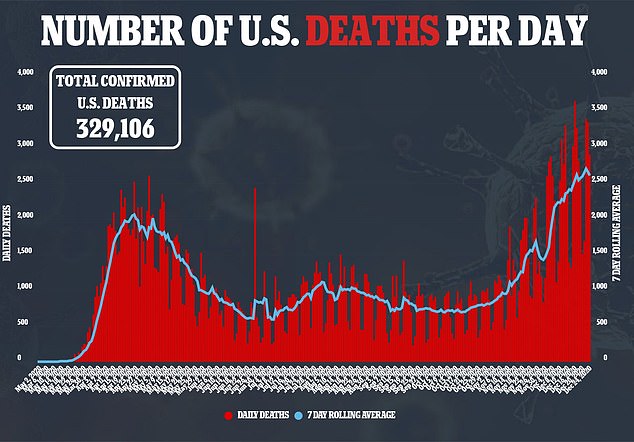 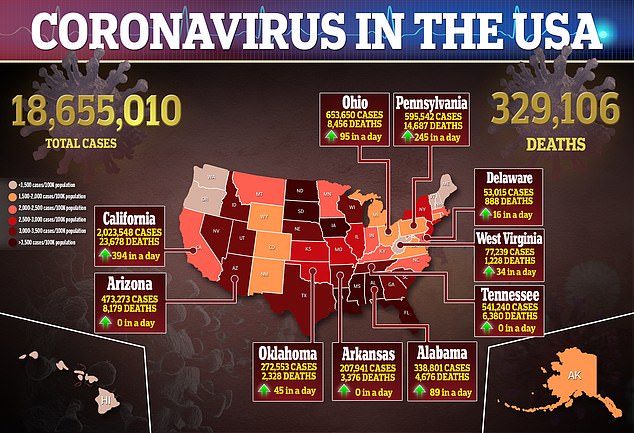 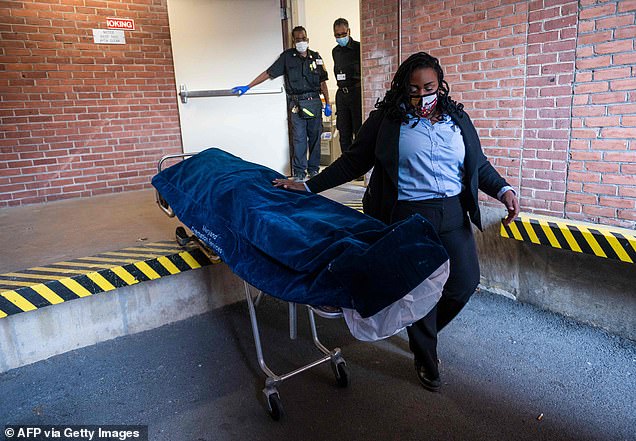 Maryland Cremation Services transporter Morgan Dean-McMillan moves a suspected Covid-19 positive body to her van on Wednesday. There have been 329,106 deaths from the virus nationwide as of Christmas morning