California Department of Transportation officials worked quickly on Monday to blow up large boulders that snarled traffic for hours ahead of another winter storm.

Explosive experts could be seen in video posted online reducing the tractor-sized boulders to dust and ash in just a matter of seconds as California Department of Transportation officials kept Highway 50 clear of cars for about an hour.

The boulders reduced the highway to just one lane in each direction on New Years Eve in a massive winter storm that battered northern California with widespread flooding and heavy snowfall.

Fortunately, no vehicles were damaged on the road — one of three highways that connect the area to Lake Tahoe, a popular ski destination for residents in the area.

But it may now be closed down once again, as the area gets hit with a second life-threatening storm that has already sparked evacuation orders and prompted Gov. Gavin Newsom to declare a state of emergency. 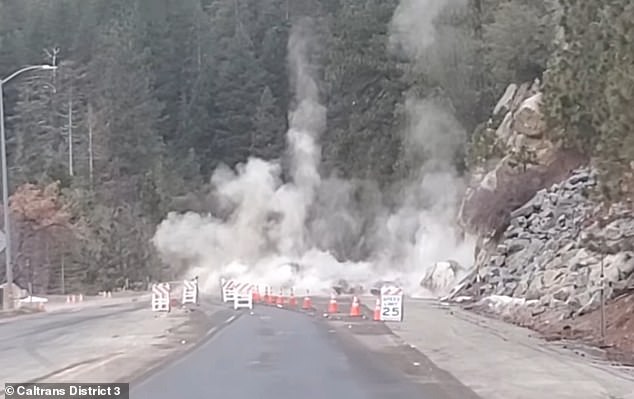 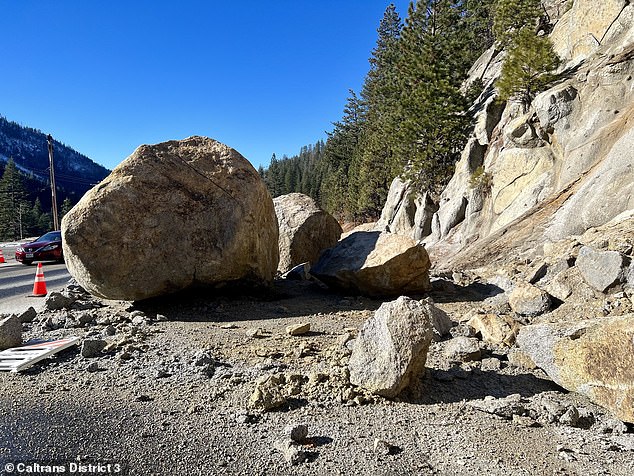 A so-called bomb cyclone — a rapidly-intensifying storm — was moving into California on Wednesday night, and is expected to bring ‘widespread flooding, impassible roads, mudslides/landslides [and] rapid rises in rivers/creeks,’ according to the National Weather Service.

The NWS is now urging residents to have ‘go bags’ at the ready and prepare insurance documentation in advance of the storm — which is expected to worsen overnight into Thursday.

Virtually all of northern and central California is under flood watches and high-wind warnings with gusts of up to 60mph expected, the Washington Post reports.

Starting during the evening commute on Wednesday, low-lying areas in the north could see two to four inches of rain, while higher elevations could start to see up to two to four feet of heavy snow.

Gov. Newsom has already declared a statewide state of emergency, and urged all residents to stay informed of any severe weather alerts. 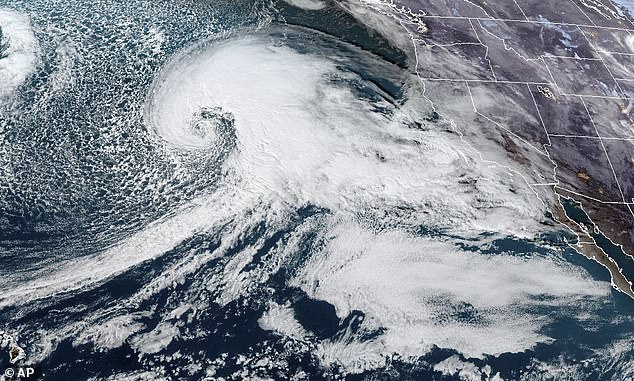 The bomb-cyclone is moving into California Wednesday night 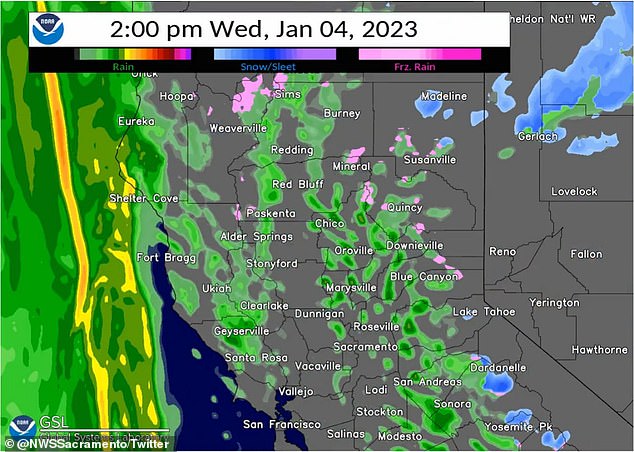 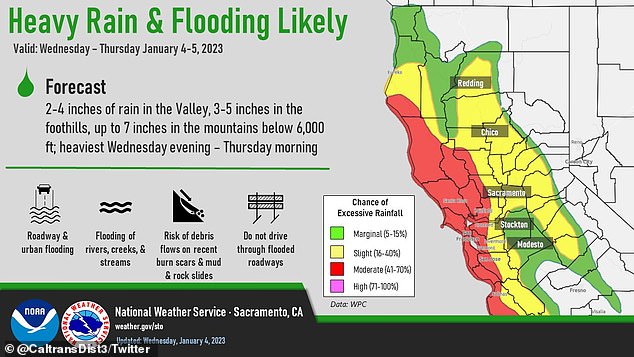 Evacuations have also been ordered in low lying areas to the north.

In the Bay Area hub of San Jose, for example, a mandatory evacuation order was issued late Tuesday night for people without shelter who reside near creeks.

About 50 miles to the south, Accuweather reports, the city of Watsonville issued a mandatory evacuation order Tuesday for neighborhoods with a high risk of flooding.

And an evacuation order was issued in southern coastal areas of San Mateo County, particularly in  the burn scar area for the CZU fire that torched the area in August 2020.

The area has already been devastated by another winter storm last week that left northern California cities under several feet of water. 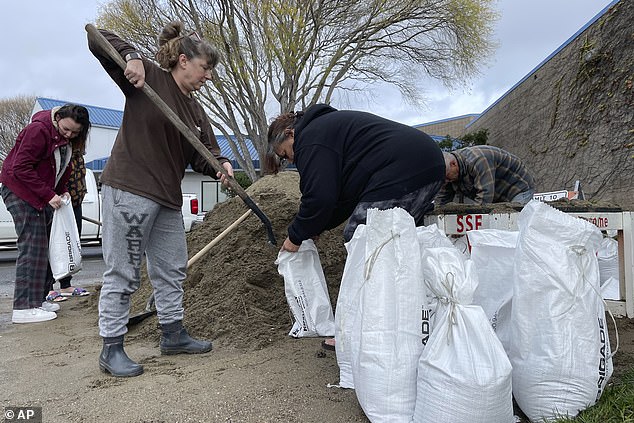 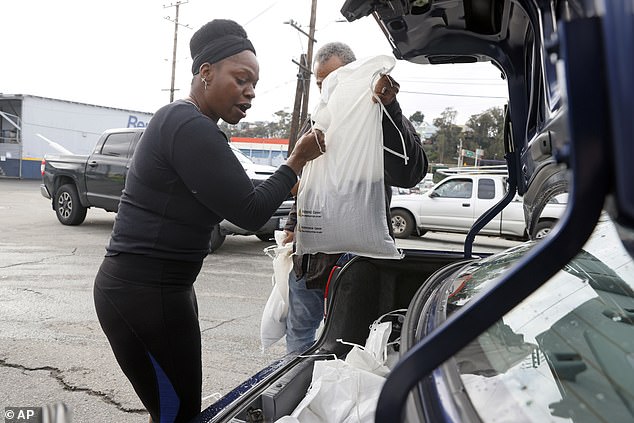 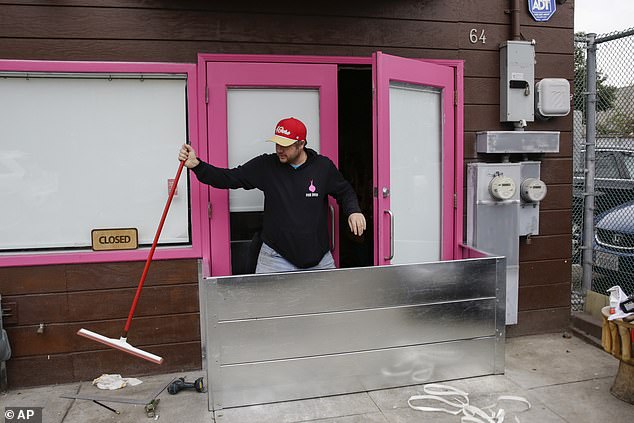 Owner Matthew Coric climbs over a metal flood gate his family members helped install in front of Pink Onion, a pizzeria in the Mission District in San Francisco on Tuesday in an effort to avoid flooding from the storm 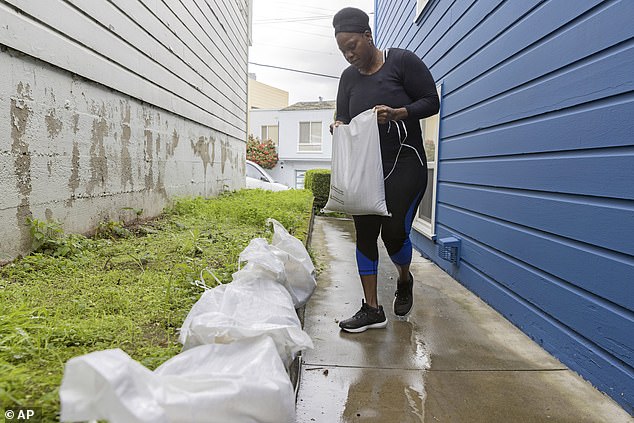 Emergency crews spent the weekend rescuing multiple flood victims by boats and helicopter, and responding to calls of fallen trees and disabled vehicles stuck in the flood waters.

The powerful storm knocked power out to thousands of residents, and even overtopped and breached a levee near the city of Wilton.

Photos and videos posted online showed cars submerged past their door handles while the bottom floors of houses in the areas were flooded in Sacramento County.

Further east, near the Nevada border, I-80 was closed briefly because of heavy snow that caused spinouts, collisions and poor driving conditions as dozens of drivers were rescued from the area.

Sierra locations above 5,000 feet received around 20 to 45 inches of snow Saturday through early Sunday morning, according to CNN.