California is set to outlaw menthol cigarettes and fruity vapes two years after the state’s proposed ban was blocked by the tobacco industry.

If approved the products will be outlawed on store shelves and in vending machines from next month.

It will make California the second state in the US to outlaw menthol cigarettes behind Massachusetts, and the fifth to ban flavored tobacco products.

Supporters heralded the results today as a ‘game changer’, saying Californians had voted to ‘protect’ their children. Experts argue e-cigarettes are a gateway to tobacco use with eight in ten children saying they have used them in a survey on Monday.

The ban was backed by the state’s Democrat governor Gavin Newsom, who urged voters to stand up to ‘nasty tobacco companies’. He was re-elected last night.

The Republican party opposed the ban arguing it would rob smokers of a useful tool for kicking the habit.

In a bad night for the marijuana industry three out of five states voting on cannabis refused to green-light the drug for recreational use. They were North and South Dakota and Arkansas.

Supporters of the ban today heralded the results as a ‘game changer’, and said Californians had voted to protect their children. Pictured above are menthol cigarettes at a store in San Francisco, California 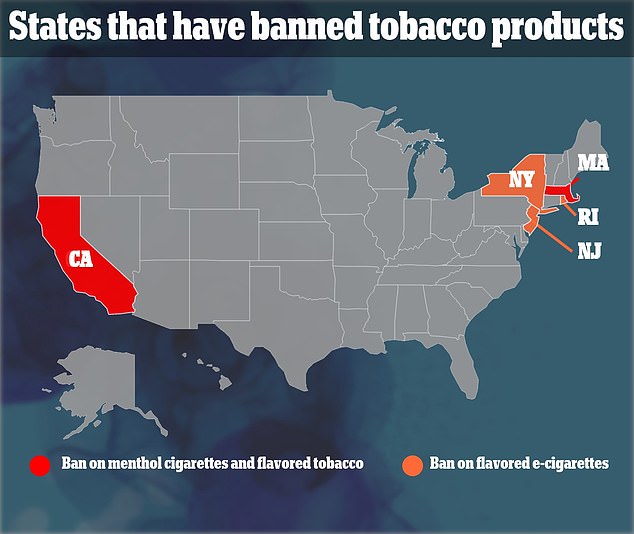 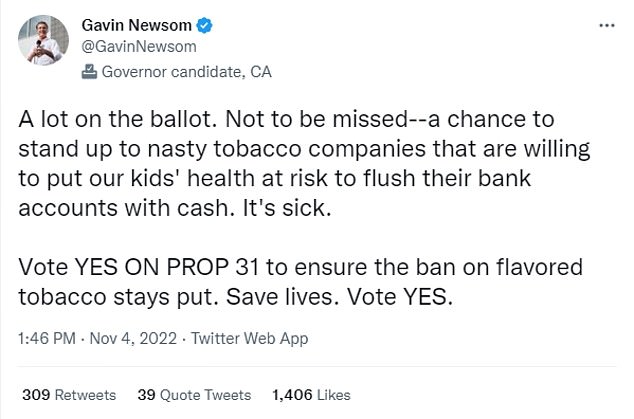 In voting yesterday Californians were asked whether they wanted to back Proposition 31, which would limit the sale of menthol cigarettes and flavored tobacco products.

But a ‘no’ vote signalled they were happy for this to continue in the state.

Pro-marijuana campaigners achieved mixed results on election night, with voters in Maryland and Missouri backing access to recreational pot, while those in Arkansas and North and South Dakota set to reject their ballot initiatives.

With most of the votes counted, weed looks set to become legal for those aged over 21 in those two states with a combined population of more than 12 million people.

They are set to join the 19 states and territories that already permit recreational pot, and leave nearly half the US population living in areas where the possession and use of pot are legal for adults. A total of 38 states permit marijuana for medical use.

Yet the midterms did not offer the wholesale endorsement of pot that some had anticipated.

About 42 per cent of votes in the state of 39million have been counted so far, with more results set to be announced in the coming days.

‘Tonight, once again Californians voted in support of protecting kids and standing up to Big Tobacco,’ he said.

‘Big Tobacco will no longer be able to use flavored tobacco products to attract kids to nicotinbe and profit from addiction, disease and death,’ she said.

‘The positive impact on our communities, families and youth will be immense.

Governor Gavin Newsom said yesterday as polls closed that the vote was a chance to stand up to ‘nasty tobacco companies’ that ‘put children’s health at risk’.

The tobacco industry poured $25million into its anti-ban campaign, saying the move would rob smokers of an effective tool for kicking the habit.

But campaigners raised twice the amount — $60million — arguing that flavored tobacco was a gateway to cigarettes for children.

They received large donations from former New York City mayor Michael Bloomberg, who has been lobbying against the industry.

Studies are mounting showing the health risks of e-cigarettes, including that they are just as likely to cause heart problems as standard cigarettes and leave youngsters at risk of addiction.

The Centers for Disease Control and Prevention (CDC) says they are ‘unsafe’ for children, and may make youngsters more likely to become smokers in the future.

Gavin Newson proposed a ban on fruity vape flavors and menthol cigarettes back in 2020.

But the tobacco industry overturned the ruling in November that year, forcing it to a referendum after obtaining a million signatures.

Today’s results keep the ban in place, which is set to come into effect from December this year.

But some fear it could still be overturned due to separate legal action being run by the tobacco industry. 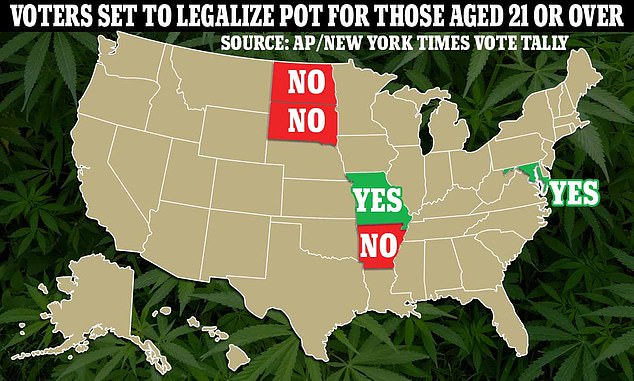 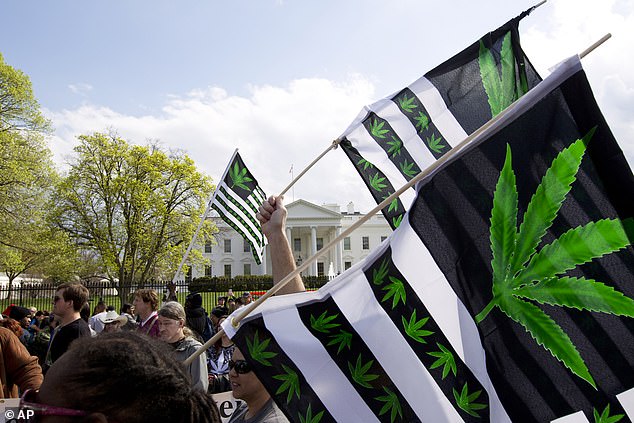 Tobacco company RJ Reynolds is arguing that it is not legal for states to impose their own bans on cigarette use.

Some are concerned that the this case will be taken up by the Supreme Court and then won by tobacco companies.

‘No court at any level has ever struck down a policy prohibiting the sale of flavored tobacco products on federal pre-emption grounds, but that doesn’t mean the Supreme Court couldn’t decide otherwise and that ruling would apply everywhere.’

The ‘no’ campaign said in a statement: ‘This is a disappointment to the millions of adults over the age of 21 who are now prohibited from purchasing these products as well as other FDA-authorized harm reduction alternatives.’

It comes after pro-marijuana campaigners achieved mixed results on election night with voters in Arkansas and North and South Dakota set to reject ballots.

With most of the votes counted, weed looks set to become legal for those aged over 21 in Maryland and Missouri with a combined population of more than 12million people.

They are set to join the 19 states and territories that already permit recreational pot, and leave nearly half the US population living in areas where the possession and use of pot are legal for adults. A total of 38 states permit marijuana for medical use.