Caitlyn Jenner was hit with vile transphobic abuse at the Conservative Political Action Conference by a heckler who called her Bruce and branded her a ‘sick freak.’

The former Olympic gold decathlete, 71, was repeatedly called ‘Bruce’ by the troll, who appeared to be filming himself abusing Jenner.

He struck as the aspiring California governor chatted with fans in the lobby of the Hilton Anatole Hotel in Dallas on Friday.

The abuser, who has not been named, could be heard shouting: ‘Hey Bruce. Bruce. What do you think of the stuff they’re teaching in schools regarding the LGBTQ? Bout Jesus Christ Bruce, don’t forget about Jesus.’

He then added: ‘Look at that sick freak.’

Jenner did not rise to the cruelty, and pretended not to notice the man as she strolled through the lobby and into a waiting SUV.

She fell victim to a practice known as ‘deadnaming’ – where a transgender person is deliberately called the name they used before transitioning in a bid to upset them.

Before her transition, Jenner was known as former Olympic Decathlete Bruce, who won gold in the 1976 Montreal Olympics. The socialite is also famous for being father to social media superstars Kylie Jenner, 23, and Kendall Jenner, 25.

The abuse Caitlyn suffered was shared on a satirical Twitter page called Patriot Takes, which appears to poke fun at conservative personalities.

Caitlyn was verbally abused despite running as a Republican challenger to current California Governor Gavin Newsom, who faces a recall election this fall.

Jenner, 71, encountered the transphobic man during CPAC’s kickoff event in Dallas on Friday 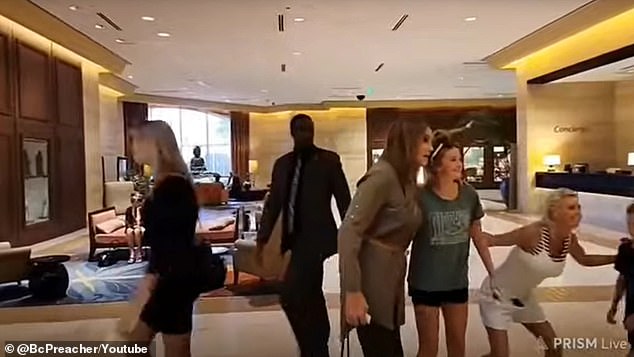 Jenner did her best to ignore the man, who briefly followed her as she made a hasty exit from the Hilton Anatole hotel lobby 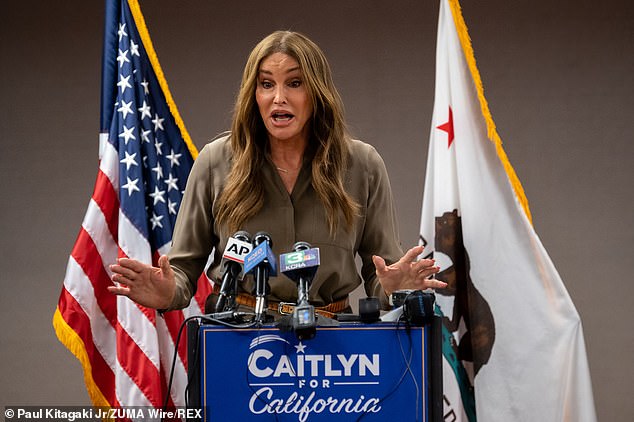 Caitlyn Jenner, Candidate for Governor of California, meets the media to ensure the laws governing the recall election are enforced and uniformly applied on Friday

Since she announced her campaign for Governor of California on April 23, news reports have covered the 71-year-old’s efforts to endear herself to the GOP, voicing her distaste for critical race theory and towing the party’s line on the issue of transgender athletes, according to a May 3 article by Politico.

Jenner says she thinks it is unfair to let trans female athletes compete against cisgender women – women who were born as the gender they continue to identify as.

‘For the past decade we have seen the glimmer of the Golden State reduced by one-party rule that places politics over progress and special interests over people,’ Jenner said in a statement upon her announcing her candidacy.

‘I am a proven winner and the only outsider who can put an end to Gavin Newsom’s disastrous time as governor.’

Her transphobic encounter at Friday’s CPAC kickoff event in Dallas caused many to respond in disgust, while others appeared to blame Jenner herself for aligning with a conservative party.

‘Did I hear that correctly??? ‘Hey, Bruce’ ‘Yeah’ Did… Did Caitlyn answer to ‘Bruce’??’ one person tweeted in response to the video.

‘That was actually really troubling…. listen to the disgust in his voice. We have a really big problem’ a second person commented. 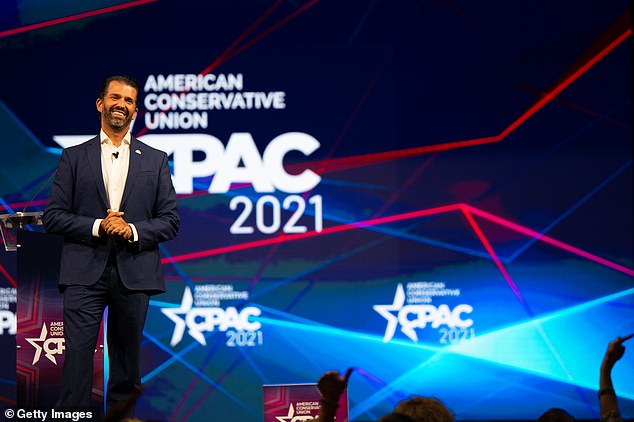 Meanwhile, Donald Trump Jr, delivered his own address at the conference on Friday, telling Fox News afterwards that he would be ‘very involved during the 2022 campaign’ season 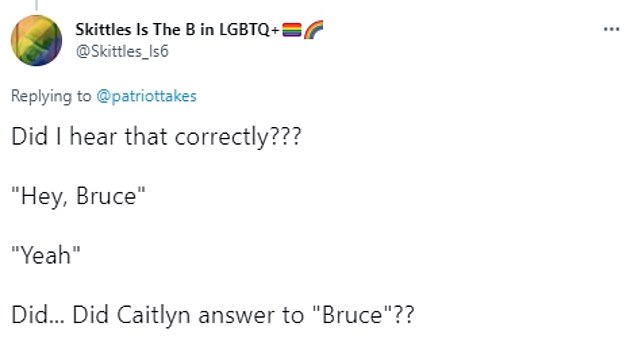 ‘Looks like she is being welcomed in to the GQP with open arms. Face with rolling eyes,’ another added.

‘And she’s proudly going to CPAC knowing they are intolerant of the trans community,’ tweeted Victoria Woodhull.

The conference will be headlined by a speech from former President Donald Trump, who is scheduled to speak on Sunday.

Meanwhile, his son, Donald Trump Jr, delivered his own address at the conference on Friday, telling Fox News afterwards that he would be ‘very involved during the 2022 campaign’ season.