Fears are rising about the economic misery of coronavirus lockdown today amid deep Cabinet splits over how and when to ease the curbs.

Foreign Secretary Dominic Raab has moved to quash the idea of an imminent loosening, with the UK now facing restrictions until at least May 7.

But there is growing alarm about the potential death toll from putting UK plc on hold, with life expectancy set to take a major hit. Doctors have also warned that suspending all non-urgent NHS operations to focus on coronavirus cases means some cancer and heart disease patients will die.

Ministers are divided between ‘hawks’ and ‘doves’ over whether to push to ease the lockdown soon, with some saying the public is obeying social distancing too well and must be urged to keep working where possible.

Concerns have been raised that it is impossible to lift the curbs at the moment because the public is so strongly in favour of them staying in place, and would simply refuse to go back to normal.

However, to underline the sense of drift the full Cabinet meeting has been cancelled today for the second week running, as Boris Johnson recuperates from the disease at Chequers. 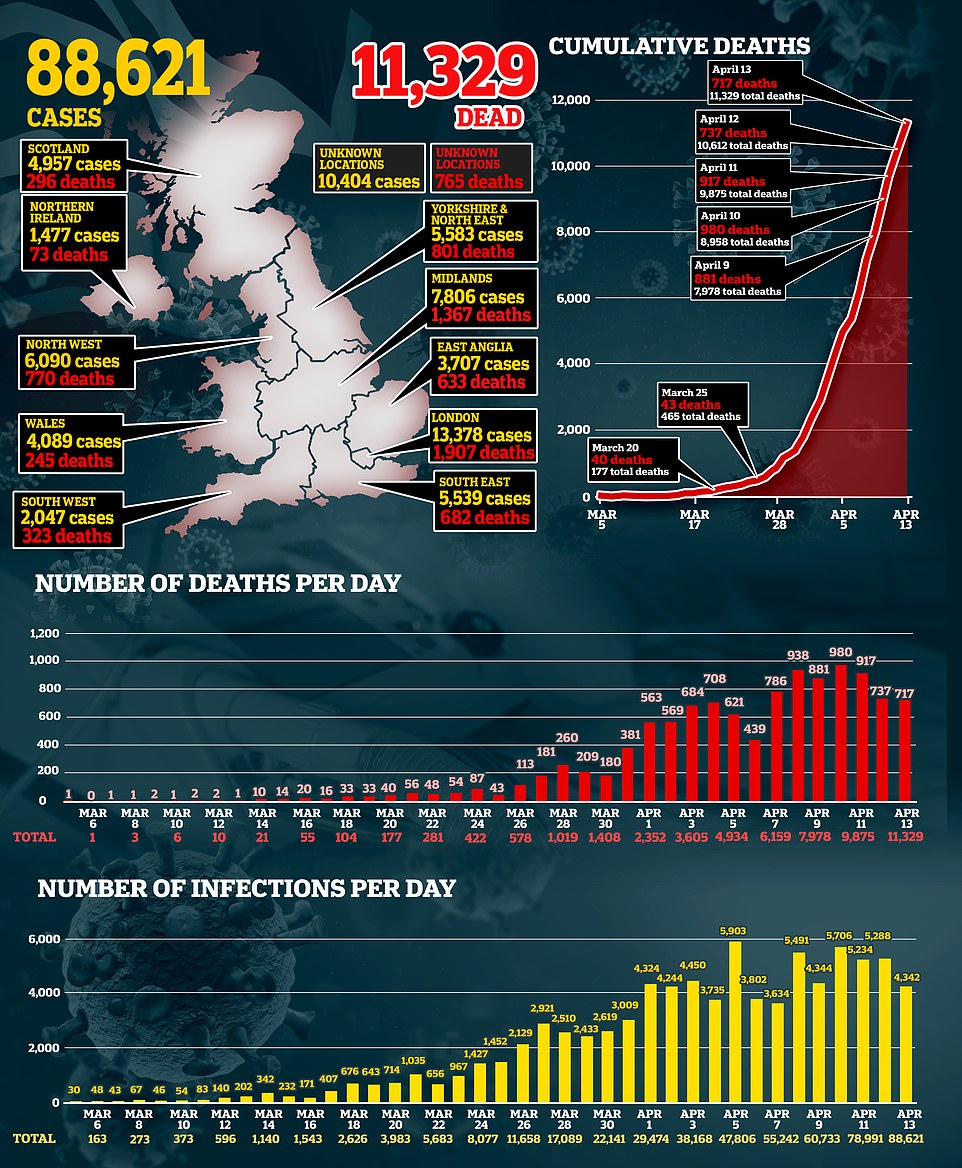 The vast majority of Britons back the lockdown rules being used to tackle the coronavirus but have mounting fears it will cripple the economy, a poll has found.

The country supports Boris Johnson’s decision to shut down the country on March 23, but are scared about what it may cost.

It is understood Foreign Secretary Dominic Raab will announce on Thursday the restrictions will last until at least May 7.

The devastating virus has ripped across Britain, having killed 11,329 and infected 88,621. 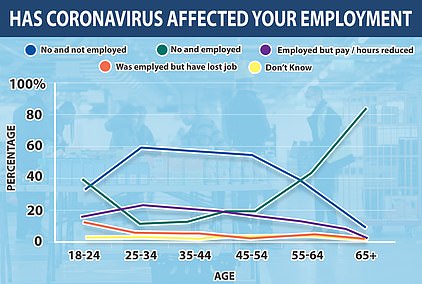 The YouGov poll for the Telegraph found 84 per cent of those surveyed expected financial problems due to the lockdown.

As much as 19 per cent of mainly younger workers have been rendered unemployed or have been forced to take a lower salary.

The survey, which asked more than 2,000 Britons on Sunday, found 48 per cent of the country backs the Government’s lockdown measures.

A staggering 92 per cent said they agreed with: ‘I will probably follow the advice of the Government even if I don’t agree with it or find it pointless.’

Yet 44 per cent feel the PM could have implemented tighter controls as daily updates of people flouting the rules continue to emerge. Meanwhile a higher figure have said they feel progressively lonely and unhappy as the mental health impact of the restrictions start to bite.

YouGov political research manager Chris Curtis said the findings prove tricky for the policymakers, with it showing people back the lockdown but fear for the economy if it continues. 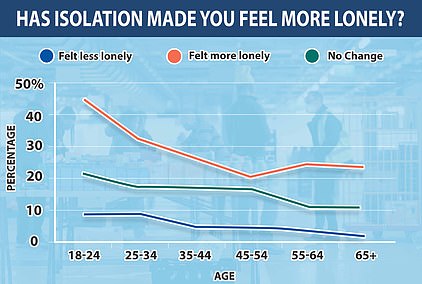 Meanwhile a higher figure have said they feel lonely

The government is still preparing estimates for how many ‘excess’ deaths will be caused by a deep recession – which could strip a third from GDP.

But think-tanks have suggested that more than a million more people could end up with long-term health conditions.

Treasury sources warned of ‘systemic failures’ if the economy is not revived by mid-summer. ‘There’s a point where there just isn’t anything to come back to,’ one source told the Times.

But a Cabinet source told the Telegraph: ‘We won’t be able to lift the lockdown until the public feels ready for it.

‘The Prime Minister’s illness has probably added another week to when that point will come, because it’s made everyone feel as if they know someone who has come close to losing their life to the virus and it has changed attitudes.’

The government’s Scientific Advisory Group on Epidemics (SAGE) is meeting later to consider the latest evidence and try to thrash out a consensus, although it will not make a recommendation until later in the week.

Mr Raab tried to voice cautious optimism last night as he revealed the latest data suggested the UK was ‘starting to win this struggle’, three weeks after restrictions were imposed.

But he insisted the virus was not yet past its peak and that it was ‘far too early’ to talk about relaxing the measures, with reports suggesting the lockdown will be extended for at least another three weeks.

Speaking at the Downing Street press briefing, he praised the public for staying at home over the Easter weekend, and added: ‘Our plan is working.

‘Please stick with it, and we’ll get through this crisis together.’

Details of how the lockdown will eventually be lifted remain unclear, however, with the Government repeatedly refusing to outline its ‘exit strategy’.

Scientists advising the Government are expected to meet this week to review the latest figures, but Mr Raab insisted it was crucial that ‘we do not take our eye off the ball’ with regards to social distancing.

It came as the World Health Organisation said restrictions should be lifted slowly and not ‘all at once’ to avoid a resurgence of the virus, and only if appropriate measures are in place, including ‘significant’ capacity for contact tracing.

But experts have also warned that the public’s strong support to stick to the lockdown measures ‘won’t last’ and the Government needs to find a way to tell the nation about how it will be eased.

Professor Linda Bauld, of the University of Edinburgh, said the public was now steeling itself for a continuation of the lockdown, amid an atmosphere where support for the measures remains high, compliance is generally good and concern about the virus is at the forefront of people’s minds.

‘But this won’t last,’ she warned.

‘The social, economic and health effects of lockdown are accumulating.

‘There will come a tipping point when the cost of the current restrictions outweighs the benefits.’

She added: ‘Sooner rather than later, government needs to share the possible options with the public and be transparent about the costs and benefits of each, rather than continually evading questions on this, as is currently the case.’

Professor Robert Dingwall, who sits on the New and Emerging Respiratory Virus Threats Advisory Group which advises Sage, suggested the government had already gone over the top, and there was no evidence sunbathers posed a risk to one another.

‘If it was entirely down to me I would be calling the dogs off. I don’t think it is appropriate to harass sunbathers,’ he told the Telegraph.

The Government has also faced criticism over whether more lives could have been saved if the lockdown had been implemented earlier, as the Department for Health said 11,329 people had died in hospitals in the UK as of 5pm on Sunday, with many more expected in care homes.

It means the UK has more recorded deaths than any country except the US, Italy, Spain and France.

But Mr Raab rejected any ‘like-for-like’ comparison with other countries, saying it depended on each nation’s individual circumstances and how far along the coronavirus outbreak curve they were.

Meanwhile, questions were also raised about whether the number of coronavirus-related deaths in care homes was being properly recorded.

Industry bosses warned daily death tolls are ‘airbrushing out’ hundreds of older people who have died in the care system, as the chief medical officer announced that coronavirus outbreaks had been recorded at 92 care homes in the UK in just 24 hours.

Speaking at the daily press briefing, Professor Chris Whitty said around 13.5% of care homes in the UK have registered an outbreak, and said he would like Covid-19 testing to be increased in care homes.

The Government also continues to face pressure over shortages of personal protective equipment (PPE) for frontline NHS staff, as a growing number of health workers died.

According to The Guardian, the UK missed three chances to be part of an EU scheme to bulk buy personal protective equipment (PPE) for health workers, with European medical staff set to receive the first of £1.3billion-worth of PPE within days or a maximum of two weeks under the scheme. 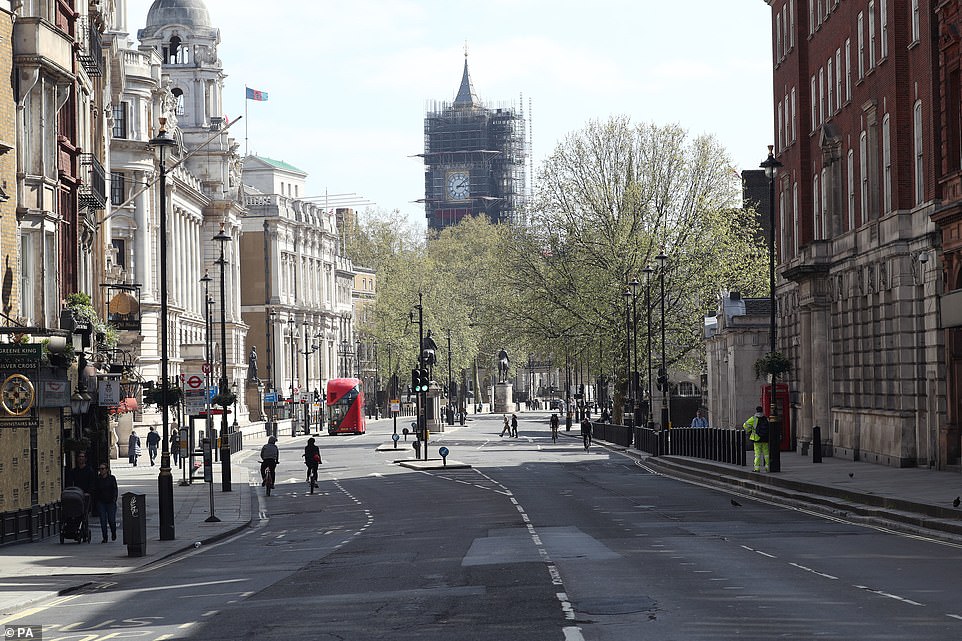 Roads across Britain have been largely deserted since the lockdown came into force. Here Whitehall in London is almost empty even for a Bank Holiday Monday