This is the terrifying moment bystanders were forced to run for cover after a gunman struck in a triple shooting outside a Chinese takeaway.

The CCTV footage was recorded near Coventry, West Midlands, as the suspect opened fire on Thursday night.

Police have now imposed a dispersal order and said that they are now ploughing ‘significant’ resources into its effort to catch the offenders behind the attack.

In the clip, a group of young men standing together on the pavement can be seen ducking for cover as the gunman opens fire from beyond the camera.

The assailant is then thought to have driven off at speed in a dark-coloured vehicle.

Three people were injured after the gunman, who is thought to have had an accomplice driving a car, opened fire.

Two of the victims have been discharged from hospital but a third continues to receive medical treatment.

Bystanders were forced to run for cover after a gunman struck in a triple shooting outside a Chinese takeaway in Coventry, West Midlands

A police spokesman said: ‘The man that we thought was most seriously injured was less serious than first thought and has been discharged from hospital. One still remains in hospital in a stable condition.

‘We are continuing to put significant resources into patrolling the area and trawling CCTV to apprehend the offenders. We also have a Dispersal Order in place in Far Gosford Street.’

Dispersal powers are granted under the Anti-Social Behaviour, Crime and Policing Act 2014 and mean officers can direct anyone to leave an area whose behaviour is likely to cause alarm, harassment or distress. 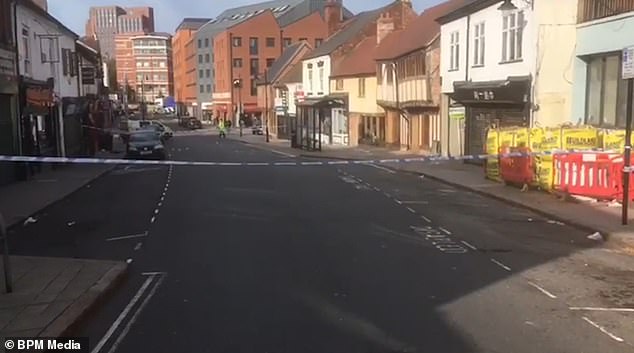 Police also have the power to seize items that are used to cause distress, including bicycles.

Speaking the day after the incident, Chief Inspector Paul Minor, of Coventry Police, said: ‘We’ll be stepping up patrols in the area over the coming days.

‘This was outrageous violence on the streets of the city centre and we’re doing everything we can to bring those responsible to justice.’

The road was initially closed while police forensically examined the scene and went door-to-door speaking to traders.

The street has since returned to normality as staff at the Chinese takeaway boarded up a bullet hole in the window and swept up debris.