EXPRESS INFORMER > News & Politics > ‘Buy one, get one free’ deals on fizzy drinks, crisps and fatty foods will be banned from April 2022

‘Buy one, get one free’ deals on fizzy drinks, crisps and fatty foods will be banned in medium and large stores, as well as on websites, from April 2022

Supermarket promotions of unhealthy food will be curbed as part of the Government’s war on obesity.

‘Buy one get one free’ deals on fizzy drinks, crisps and fatty foods will be banned in medium and large stores, as well as on websites, from April 2022.

And free refills of sugary soft drinks will be prohibited in restaurants and fast food outlets.

Supermarket promotions of unhealthy food will be curbed as part of the Government’s war on obesity. The curbs will apply to promotions for food high in fat, salt or sugar (file image)

The curbs – designed to combat ‘pester power’, where children pressure their parents into making purchases – will apply to promotions for food and drinks high in fat, salt or sugar.

Also within the remit of the new rules are pizzas, ready meals, battered products, crisps, chips and breakfast cereals.

The changes will block retailers from multibuy promotions such as ‘three for two’ offers on these products.

Unhealthy promotions will no longer be featured in key locations, such as at checkouts, store entrances and aisle ends.

Online, they will be banned on home pages, main pages for other food categories and shopping basket or payment pages. 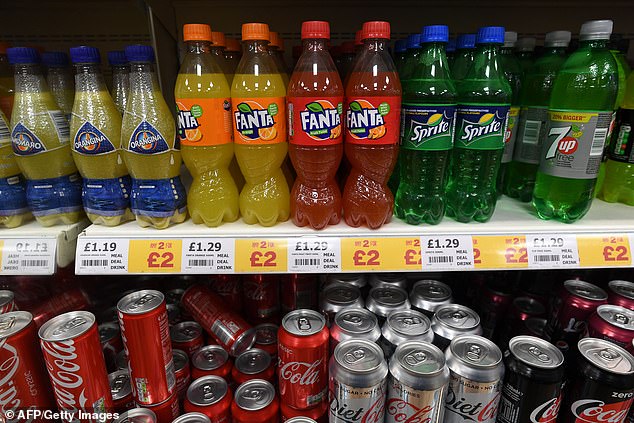 ‘Buy one get one free’ deals on fizzy drinks, crisps and fatty foods will be banned in medium and large stores, as well as on websites, from April 2022 (file image)

Ministers say that although promotions appear to help shoppers save money, data shows that such deals increase purchases of the products by almost 20 per cent as they encourage buyers to take more than they need or intended to snap up in the first place.

Unhealthy deals will not be placed in store entrances, aisle ends and checkouts and their online equivalents such as home pages and shopping baskets.

Retailers will be banned from offering BOGOF or three for two offers on products high in fat, salt or sugar.

Free refills of sugary soft drinks to be banned in all restaurants.

Public health minister Jo Churchill said: ‘Creating an environment which helps everyone eat healthier foods more regularly is crucial to improving the health of the nation.’

Plans to curb unhealthy multibuys were first announced in the Government’s obesity strategy earlier this year.

In the New Year, Public Health England will launch a ‘Better Health Campaign’, with adverts on TV and online to inspire and support people to maintain a healthy weight.

Obesity is one of the biggest health crises the country faces, with almost two-thirds of adults in England being overweight or living with obesity.

One in three children leave primary school overweight or obese, while obesity-related illnesses cost the NHS £6billion a year.

Professor Graham MacGregor, chairman of charity Action on Sugar, said: ‘Finally, Downing Street is acting decisively with a bold first step to restrict the sale of junk food on multi-buy offers and at checkouts, and taking on one of the biggest threats to Britain’s future health – childhood obesity.

‘Putting junk food multi-buy offers in the aisles and at the checkouts is just another way of food companies sneaking their unhealthy products into your basket.

‘Now is the time for healthier food to take centre stage.’

Ministers say the location of products within stores can significantly affect purchases by shoppers, with end of aisle displays shown to increase soft drink sales by more than 50 per cent.

The restrictions on promotions will only apply to medium and large businesses – those with 50 or more employees.

The location curbs will apply to stores over 2,000 square feet, with specialist retailers exempt.