The Swedish company, which at one time was Europe’s most valuable private tech firm, reported a mammoth loss of £502million for the first half of 2022, compared to a £114million loss in the same period last year.

This came despite the amount of goods it helped to sell by offering its credit service rising 21 per cent to £35billion, while revenues climbed 24 per cent to £816million.

Klarna, which is the world’s biggest provider of BNPL credit – serving 150m customers including 15m in the UK – attributed the dismal results to higher credit losses in new markets and a rise in employee costs.

Founded in Stockholm in 2005, Klarna last reported a profit four years ago before embarking on a period of rapid international expansion.

But it as been hit by a slowdown in consumer spending amid soaring inflation, and faces a looming crackdown including in the UK where there is currently no regulation of BNPL products.

‘Klarna has been operating in a very different environment in the first half of 2022…When we set our business plans for 2022 in the autumn of last year, it was a very different world than the one we are in today,’ said boss Sebastian Siemiatkowski.

He added that the firm would in future focus on ways to ‘accelerate us back to profitability’, including lending ‘a little less’ to new customers in order to cut the group’s credit losses from those who found themselves unable to repay their borrowings. The company’s products allow people to defer payments into instalments. 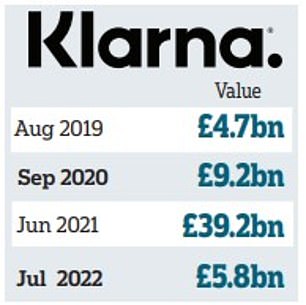 Klarna is popular with younger consumers and in sectors such as clothing and fast fashion – segments that are currently at the sharp end as households cut back on spending amid surging prices of essentials such as food and energy.

The darkening economic outlook means Klarna has suffered a painful fall from grace over the past 12 months. It was valued at a whopping £39.2billion in a funding round in June last year.

But a sharp sell-off of technology stocks earlier this year, amid market panic about their growth prospects, has sent its value tumbling.

As a result, last month Klarna struggled to raise additional cash at its high valuation, and eventually raked in £687million from investors but at a much-reduced value of £6billion.

Neil Wilson, analyst at Markets said: ‘The tech bubble has popped. Investor patience for companies like Klarna is running thin and there are questions over the business model.

‘What happens if the regulators crack down next year?’ Britain’s Financial Conduct Authority has been damning about the sector and Klarna.

It previously warned companies selling unregulated BNPL products against using misleading advertising, saying they may be ‘committing a criminal offence’ if they did not abide by rules concerning financial promotions.

The watchdog has also raised concerns that consumers could be ‘misled’ if buy now, pay later adverts did not feature prominent warnings about the risks to customers, including taking on debt that they cannot afford to repay.

Moves to improve oversight of the sector come amid concerns that BNPL lures people into borrowing more money than they are able to feasibly repay, leaving them more exposed to cost-of-living shocks.