Butt out! Moment goat and rooster rush to save chicken from hawk attack

A goat and a rooster are being hailed as heroes after they bravely fended off a hawk who was attacking a chicken on a farm in the Netherlands.

Jaap Beets, 59, was inside his farmhouse in Gelderland on September 5 when he heard ear-piercing screaming coming from his livestock outside.

In an attack that lasted just 17 seconds, a hawk attempted to prey on one of his chickens, but his other animals managed to save the bird before he made it to the scene.

Jaap Beets, 59, was in his farmhouse in Gelderland on September 5 when he heard screaming coming from his livestock outside as his chicken was attacked (pictured)by a hawk

In the clip, the chicken attempts to flee the hawk’s sharp talons but appears to be fighting a losing battle until a fearless rooster comes to its aid.

Mr Beets’ brown goat Bruin then rushes over from the other side of the paddock and charges at the bird of prey like a battering ram.

The two brave animals amazingly manage to push the goshawk away from the defenceless chicken and force it to fly away.

The chicken manages to flee inside its hutch while the other birds on the paddock can be seen making a desperate dash indoors amid the chaos.

It isn’t the first time that the farmer has been left feeling ‘proud’ of his animals, as his turkey and goats have rushed to save his chickens twice before.

Mr Beets, who lives with his wife Carina, said: ‘I was so proud of the rooster and the goat jumping in to defend our chicken. I was also very relieved that the chicken survived. 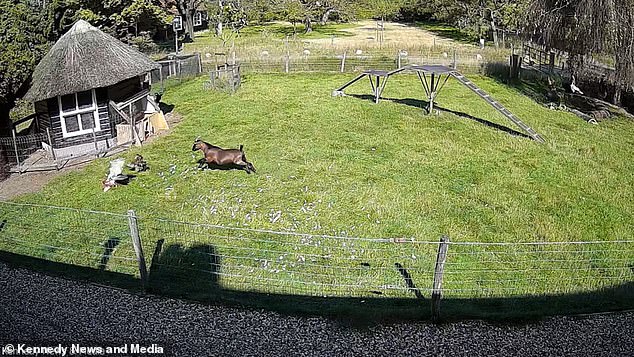 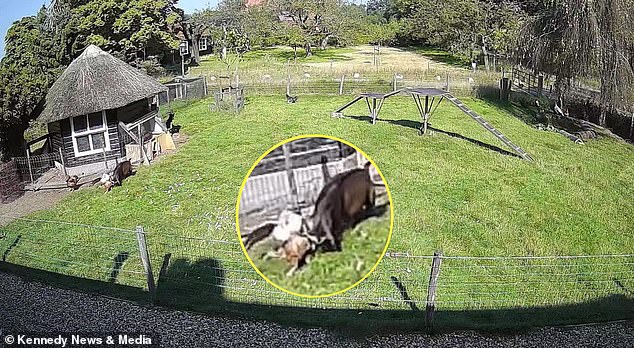 The two brave animals amazingly manage to push the goshawk away and force it to fly away, while the chicken manages to flee inside its hutch

‘I heard the screaming animals but it was too late to see the attacker so I checked the CCTV.

‘It took only 17 seconds between the appearance and disappearance of the hawk.’

Mr Beets confirmed that the chicken escaped with minor injuries and survived the sudden ambush, saying it is the third attack on his chickens in seven years.

He explained: ‘In the seven years I have lived here, it’s the third attack on our chickens. This was the second from a goshawk and the other was a buzzard.

‘In the two previous attacks the turkey and the goats saved the chickens.

‘Fortunately the chicken only had two minor wounds. It took her a few days to get back to normal. The other birds rallied around and kept her company. 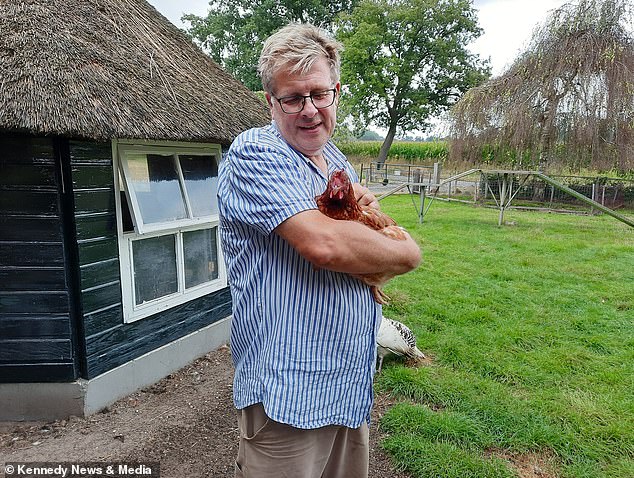 Mr Beets confirmed that the chicken (both pictured) escaped with minor injuries and survived the sudden ambush, saying it is the third attack on his chickens in seven years 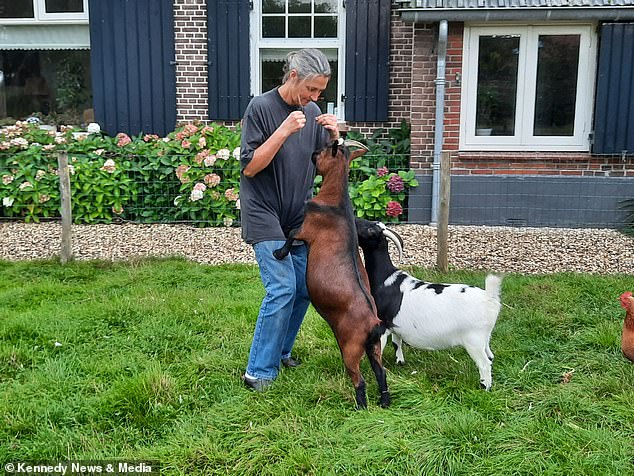 Mr Beets, who lives with his wife Carina (pictured with ‘hero’ goat Bruin), said it isn’t the first time that he has been ‘proud’ of his animals for rushing to save his chickens

‘I grew up with a deep respect for nature and have worked in environmental jobs and in nature conservation all my life.

‘Now we have our own old farmhouse in Hall, where we try to facilitate nature as much as possible.’

The incredible footage of the rescue mission has been viewed more than 447,000 times on social media, with people lauding the goat as ‘a hero’ and comparing the rescue to ‘a Disney adventure’.

One commenter said: ‘That goat though, what a hero. He deserves a whole bale of alfalfa to himself.’

Another person wrote: ‘Oh my word. Good for them. The hawk can get his meal somewhere else.’

And a third penned: ‘Amazing, it’s like a Disney adventure.’

While a fourth quipped: ‘That goat is like ‘oh hell no, not on my watch’.’