Vegans have been filmed in a spat with furious butchers, who chased them out of a meat market in central London.

The group claim butchers ‘threw eggs and frozen animal parts at them’ during the altercation in Farringdon.

In heated video footage, protestors claim they were ‘simply standing up for animal rights’ before being frogmarched out of the 900-year-old market by butchers clad in white coats. 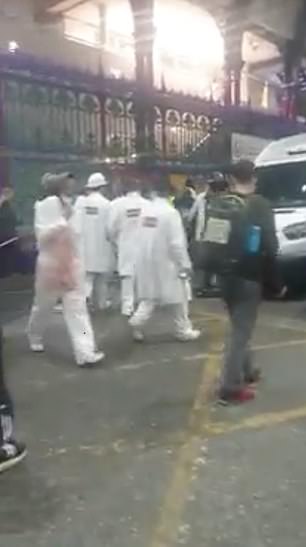 Who are the DxE activists? How animal rights protest group with branches across UK was founded in San Francisco

Direct Action Everywhere (DxE) is an animal rights protest group that was originally set up in San Francisco in 2013.

Its mission is to achieve ‘total animal liberation’ and the creation of a law requiring ‘species equality’.

Associated groups then spread throughout the US, protesting against conditions at farms used by Whole Foods and organising sit-ins at Chipotle restaurants against animal violence.

By December 2014 the organisation had spread across the globe, with groups established in 90 cities in 20 countries, and in the present day it has organised protests in 217 cities in 43 countries.

DxE pledge to take non-violent direct action but its disruptive demonstrations have been branded ‘bullying.’

Members in the US have previously been charged with burglary and theft after raiding farms and stealing livestock.

The footage was posted online by the DxE group, which said on Facebook: ‘The butchers at Smithfield Market in London city mob peaceful activists who are simply standing up for animal rights.

‘We will not back down until the killings stop Smithfield Market!’

The protestors added: ‘But what can you expect from people who enjoy cutting up bodies.’

Members of the group claim they were sprayed with ice water, kicked and punched.

In the clip, sirens can be heard wailing in the background and suddenly a man is sent sprawling to the floor of the historic meat market.

A furious fight ensues between the two groups, with punches thrown by both sides.

The person filming is then approached by one of the men in white who tells them to stop filming, as people begin to stream out of the market, shepherded by men in high vis jackets.

The dramatic video appeared on social media a couple of days after the event.

DxE is an international movement with several UK subgroups.

They say their actions are done to ‘denormalise activities that involve animal exploitation through non violent disruption.’

Brighton has seen a number of protests in restaurants led by Direct Action Everywhere, with members ending up in court because of their demonstrations.

They previously raided a McDonald’s wearing pig and chicken masks before spraying fake blood on the floor.

Last year, a male Pizza Express customer punched a female vegan activist in the face after the group stormed a branch of the restaurant in Brighton.

In January, DxE activists invaded Brighton supermarkets, including Sainsbury’s and Aldi to protest against their selling of free-range eggs.

Members of the Extenction Rebellion spin-off Animal Rebellion clashed with traders at the same site exactly one year ago. 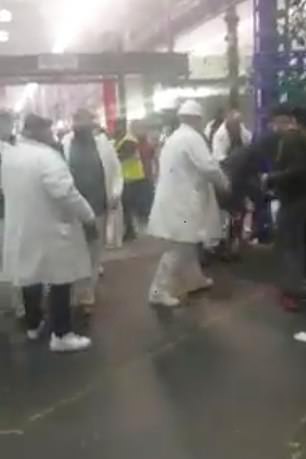 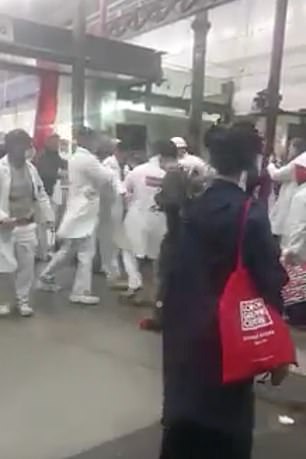 A furious fight ensues between the two groups, with punches thrown by both sides.

Last October, climate change protesters occupied part of London’s Smithfield Market as they urged the UK to transition to a vegan diet.

Dozens of campaigners set up fruit and vegetable stalls in protest of the meat industry.

One man was arrested as up to 400 protesters set up camp and filled stalls with ‘food that will make up our future food system’ during the 18-hour protest.