‘Busted on set’: Jason Momoa and Ben Affleck seen working on Aquaman and the Lost Kingdom … as Warner Bros. tour catches a glimpse of A-listers at work

Jason Momoa on Thursday took to Instagram with a shot alongside fellow A-lister Ben Affleck as they apparently worked on the upcoming movie Aquaman and the Lost Kingdom at Burbank, California’s Warner Bros. Studios.

The Aquaman leading man, 42, donned an off-white top as he leaned into Affleck, 49, who was clad in a black suit with black tie.

‘REUNITED bruce and arthur,’ the Honolulu, Hawaii native captioned the shot, referring to their DC superhero alter ego names of Bruce Wayne and Arthur Curry. ‘Love u and miss u Ben.’

The latest: Jason Momoa, 42, on Thursday took to Instagram with a shot alongside fellow A-lister Ben Affleck, 49, as they apparently worked on the upcoming movie Aquaman and the Lost Kingdom at Burbank, California’s Warner Bros. Studios

The 6ft4 screen star was also seen outside of Affleck’s trailer, laughing as he was spotted by a group of people taking the Warner Bros. studio tour.

He laughed as he faced a group of fans on a tram, saying, ‘Well it’s not a f***ing secret anymore is it? Sorry children.

‘That’s what happens Warner Bros., when you walk out of your set and there’s our fans, hey guys, have a good time … well, we tried to keep it a secret.’ 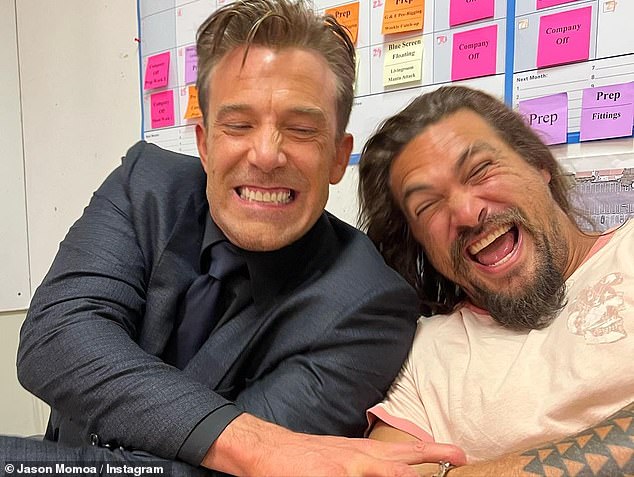 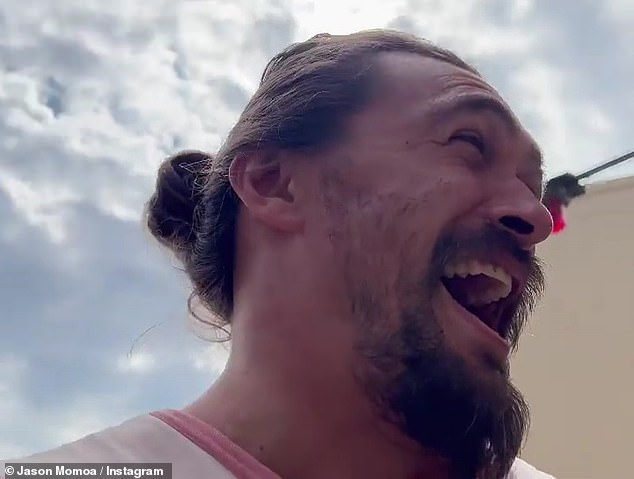 Momoa laughed as he faced a group of fans on a tram, saying, ‘Well it’s not a f***ing secret anymore is it? Sorry children’ 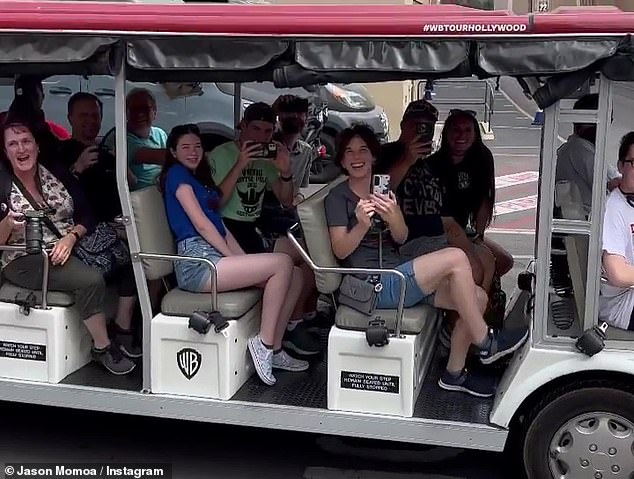 People on the Warner Bros. tour tram captured the moment with their phones

Affleck, who tied the knot with Jennifer Lopez earlier this month in Las Vegas, is also playing Batman in the upcoming film The Flash.

He spoke about reprising the role in an interview with The Herald Sun, calling it ‘a really nice finish on my experience with that character.’

He added, ‘I have never said this – this is hot off the presses – but maybe my favorite scenes in terms of Batman and the interpretation of Batman that I have done, were in the Flash movie. I hope they maintain the integrity of what we did because I thought it was great and really interesting – different, but not in a way that is incongruent with the character.

‘Who knows? Maybe they will decide that it doesn’t work, but when I went and did it, it was really fun and really, really satisfying and encouraging and I thought, “Wow – I think I have finally figured it out.”‘