A businesswoman was left stranded at an airport 1,500 miles away from home after getting stood up by a man she’d met online seven days before.

Jasmine Triggs, 23, decided to fly from her hometown of Fort Wayne, Indiana, to Houston, Texas, last week to meet a man she’d been talking to online.

But the minute she’d stepped on the plane, the mystery man, identified only as Jamal,  blocked her number and Jasmine was left heartbroken and stranded in the airport.

Jasmine, the owner of a baking company, said: ‘I was talking to this guy for about a week and he asked me to come out to Texas.

Jasmine Triggs, 23, decided to fly from her hometown of Fort Wayne, Indiana, to Houston, Texas, last week to meet a man she’d been talking to online 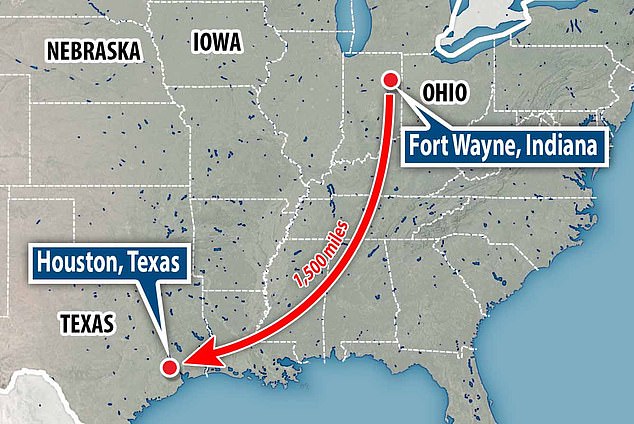 ‘We were talking to the morning I was due to go.

‘I liked him. We’d been getting to know each other but it was sexual as well.

‘He was asking me sexual stuff and he was saying he couldn’t wait to see me and that he’d cleaned his living room for me.’

The pair had been introduced via an iMessage group chat by a mutual friend who had also never met the man in person.

Jasmine had forked out $380 for the five-hour round trip and as soon as she landed at the airport, she tried to contact the man who had already blocked her number. 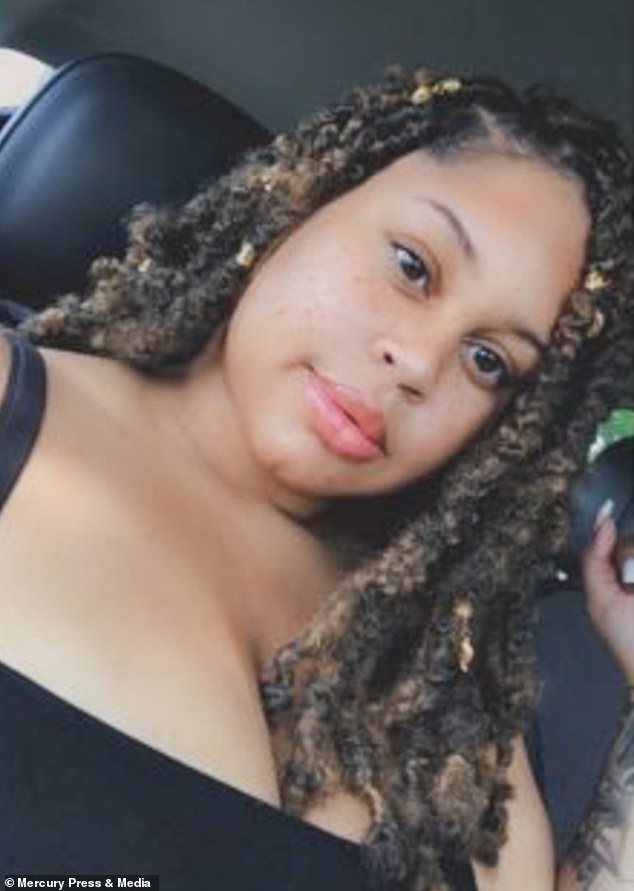 The minute she’d stepped on the plane, the mystery man blocked her number and Jasmine was left heartbroken and stranded in the airport

She said: ‘When I was on the plane, all my messages were sending to everyone apart from him so he’d obviously blocked me.

‘I didn’t hear from him all morning and once I landed, I called him, but I realised he’d blocked my number and I was panicking.

‘People from the group chat were calling him and he blocked them as well.’

Luckily, Jasmine managed to get hold of a friend who lived close by and went to stay with her for a few days but she still has no idea why she was left stranded at the airport.

She later shared her story to Twitter to warn other people of the dangers of meeting up with people they’ve never met. 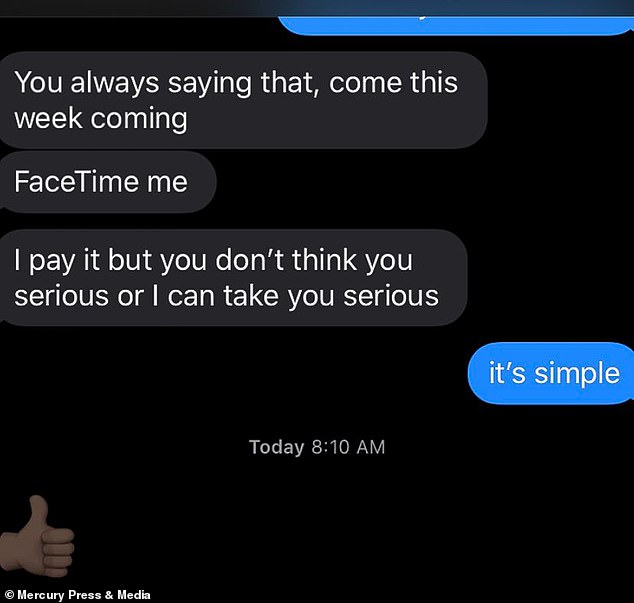 Jasmine shared screenshots of messages she was sent by her online love, telling her to come visit him

She said: ‘Either he thought it was funny or he could have had a wife or girlfriend because he started saying he didn’t know me but he shouldn’t have left me at the airport.

‘I posted it on Twitter and it went viral so he unblocked us and came back in the chat saying he didn’t know me but everyone knew he’d asked me to go to meet him.

‘He had people messaging me saying they were his sister, it was just a big conundrum.

‘I don’t even know if he does live in Texas. He has the area code but he has three different numbers. 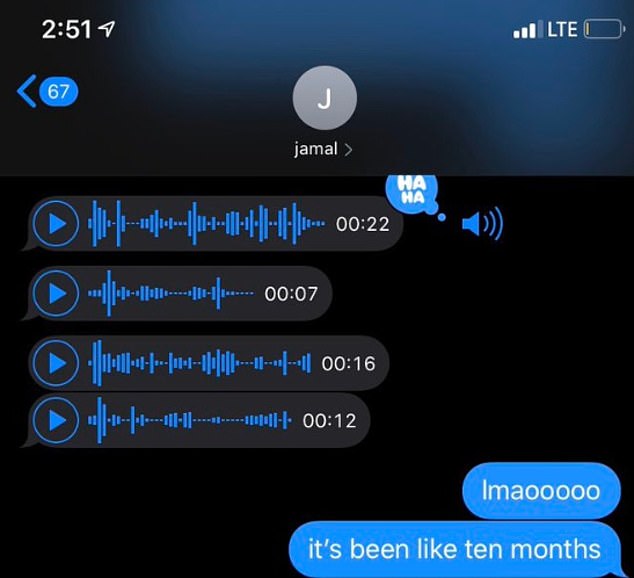 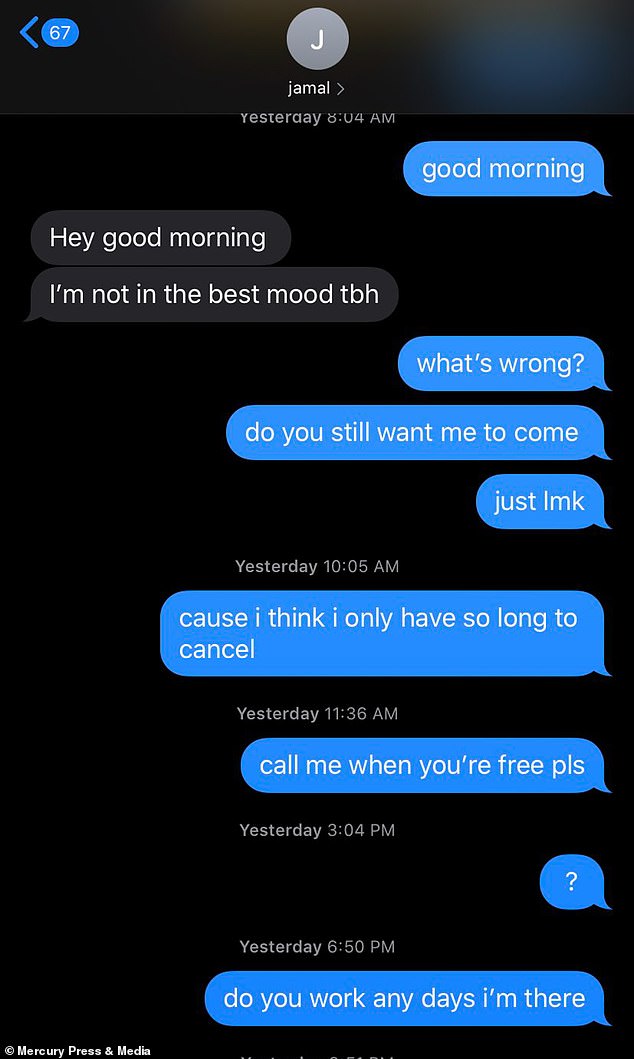 Pictured: Texts on the morning of Jasmine’s flight. As soon as she boarded the plane her partner blocked her

‘If you’re going to meet up with someone, make sure you FaceTime them first and make them buy the ticket.

‘I don’t believe in someone paying for everything which is why I bought my own ticket but if you’re going to see them, make sure they buy it because I’m $380 out of pocket and he’s said he was going to pay for everything when I got there.

‘Make sure they aren’t going to leave you there because if it wasn’t for my friend, I don’t know what I would have done.’

The tweet has racked up almost 70,000 likes and some people have even offered to pay for Jasmine’s plane ticket.

She said: ‘A lot of people have been super kind but I’ve had the occasional troll.