Sentiment amongst UK construction firms has hit its weakest level in nearly two years as inflationary pressures mounted, even though business activity remained strong, according to new figures.

The latest S&P Global/CIPS Construction Purchasing Managers’ Index survey showed a reading of 58.2 in April, compared to 59.1 in March, which was the sector’s fifteenth successive month of growth.

But the volume of business optimism plunged to its lowest since September 2020, as companies reported that surging fuel, energy, and raw material prices had led to much worse cost burdens.

A barrel of Brent crude oil stayed above $100 for much of April after plunging during the early stages of the Covid-19 pandemic when governments across the world imposed harsh restrictions on travelling.

Meanwhile, gas prices remained very expensive due to substantial demand in Asia, weak storage levels following a cold winter in 2020/21, and low winds in Europe during summer last year, amongst other factors.

These costs have been exacerbated by Russia’s full-scale invasion of Ukraine as well as major supply chain problems, such as shipping delays and shortfalls in workers, transport and materials.

Around 45 per cent of construction firms surveyed said they had been impacted by lengthier lead times against just 2 per cent who observed an improvement. 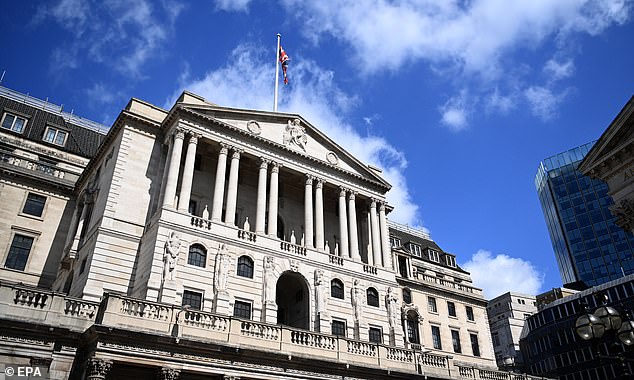 Rate rises: Construction activity has, in some instances, been set back by borrowing costs going up following a succession of interest rate hikes by the Bank of England

Yet though the industry is experiencing significant headwinds, far more businesses believe they expect activity to grow over the coming 12 months than decline and construction employment continues to increase.

Moore added that construction firms have developed ‘strong order books since the reopening of the UK economy’ which should keep the industry expanding throughout the second quarter.

In addition, the April PMI score of 58.2 is only the lowest number since January and was slightly above the average figure predicted by economists in a Reuters poll. Any figure above 50 indicates expansion.

Yet construction activity has, in some instances, been set back by borrowing costs going up following a succession of interest rate hikes by the Bank of England in response to the UK inflation soaring to its fastest rate in three decades.

Since December, Britain’s central bank has put up the base rate from a record low of 0.1 per cent to 1 per cent, though it is uncertain whether further rises will happen this year because of fears that the UK economy could fall into recession.

‘We can therefore expect to see an increasing number of businesses in the construction sector facing acute financial issues.’