Boris Johnson’s new raft of restrictions have dealt ‘a devastating blow’ to business communities, the head of British Chambers of Commerce has said.

Industry leaders insist it will now be ‘much harder’ for firms to survive, even as the much-trumpeted furlough scheme was extended for another month, and have pleaded with the government to fix testing to avoid a third lockdown.

After weeks insisting he is sticking to local restrictions, the PM completed a humiliating U-turn tonight by announcing blanket coronavirus restrictions for England at a press conference alongside medical and science chiefs Chris Whitty and Patrick Vallance.

The draconian measures – being billed as ‘Tier Four’ on the government’s sliding scale – come into force from midnight Thursday morning after bleak Sage modelling projected the virus could kill 85,000 this winter, far above the previous ‘reasonable worst case’.

The brutal squeeze will see non-essential shops in England shut until December 2, as well as bars and restaurants despite the ‘absolutely devastating’ impact on the already crippled hospitality sector.

It emerged earlier this month that the UK economy grew by just 2.1 per cent in August as the recovery from the pandemic’s impact stalled despite Rishi Sunak’s Eat Out to Help Out scheme – down on the 6.4 per cent expansion recorded in July.

The Prime Minister described the pandemic as ‘a constant struggle and a balance that any Government has to make between lives and livelihoods, and obviously lives must come first’.

He added: ‘I’m under no illusions about how difficult this will be for businesses which have already had to endure such hardship this year and I’m truly, truly sorry for that – and that’s why we’re going to extend the furlough system through November.

‘The furlough system was a success in the spring, it supported people in businesses in a critical time. We will not end it, we will extend furlough until December.’

Adam Marshall, director general of British Chambers in Commerce said tonight market confidence has been ‘hit hard by the unclear, stop-start approach’ taken by governments across the UK during the pandemic.

He said: ‘Many firms are in a much weaker position now than at the start of the pandemic, making it far more challenging to survive extended closures or demand restrictions.’

Boris Johnson’s new raft of restrictions have dealt ‘a devastating blow’ to business communities, the head of British Chambers of Commerce has said 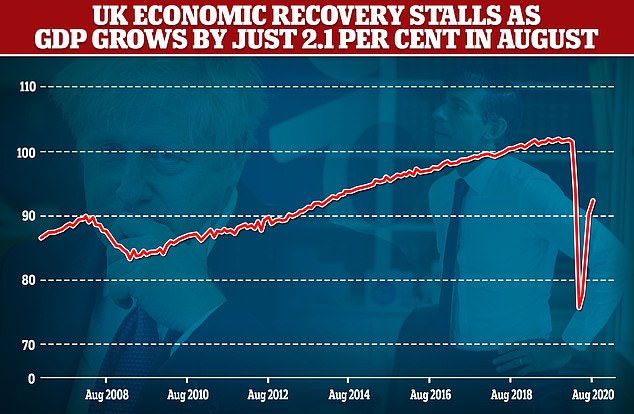 Prime Minister insists ‘lives must come before livelihoods as shops, pubs and restaurants ordered to close

The Prime Minister described the pandemic as ‘a constant struggle and a balance that any Government has to make between lives and livelihoods, and obviously lives must come first’.

But he told the press conference: ‘We have to be mindful the whole time of the scarring the long term economic impact of the measures we’re obliged to introduce.’

Defending the choice to initially go for ‘the regional approach’, Mr Johnson said: ‘In common with many other parts of this continent we’ve just seen an overall growth rate in the second wave and it has made it absolutely vital to act now to spare to protect our NHS and to save lives.’

He added: ‘Yes it is true that the course of the pandemic has changed and it’s also right that the Government should change and modulate its response in accordance, and I make absolutely no apologies for that.’

He called for Government support for businesses facing hardship, whether through loss of demand or closure, to be boosted.

He said: ‘The Government must not squander the time afforded to them through another lockdown to enable mass testing and fix test and trace systems – which hold the key to a lasting exit strategy for both public health and the economy.’

Non-essential shops must close from Thursday as part of the new measures,which leaders have blasted this evening.

Helen Dickinson, Chief Executive of the British Retail Consortium, said: ‘Retail faces a nightmare before Christmas as the Government proposes to close thousands of retail premises under this new national lockdown, denying customers access to many of their favourites shops and brands.

‘It will cause untold damage to the high street in the run up to Christmas, cost countless jobs, and permanently set back the recovery of the wider economy, with only a minimal effect on the transmission of the virus.

‘A recent Sage paper reported that closing ‘non-essential’ retail would have minimal impact on the transmission of Covid. This is thanks to the hundreds of millions of pounds retailers have spent making their stores Covid-secure and safe for customers and colleagues.

‘The announced closure will have a significant economic impact on the viability of thousands of shops and hundreds of thousands of jobs across the country. The previous lockdown cost ‘non-essential’ shops £1.6 billion a week in lost sales; now that we are entering the all-important Christmas shopping period, these losses are certain to be much bigger.

‘We have no doubt that retailers will comply with the rules and play their part to ensure the British public can remain safe and have access to the goods they need. Nonetheless, Government must also play its part, providing support to businesses that will be forced to close, otherwise the consequences for local retail will be dire.’

Pubs and restaurants will also close under the new lockdown plans, and the Campaign for Real Ale has called for further support to be provided while doors are shut.

National chairman Nik Antona said: ‘The second lockdown is a devastating blow for an industry that is already on its knees. Pubs across the country have already invested thousands to reopen COVID-safe environments despite facing seriously reduced incomes.

‘The Government must introduce a support package for all pubs and breweries – regardless of their current rateable value – and extend the furlough scheme for the full period of lockdown.

‘We also need a clear route map out of lockdown which is based on evidence, otherwise we will see many pubs and breweries close their doors forever.’ 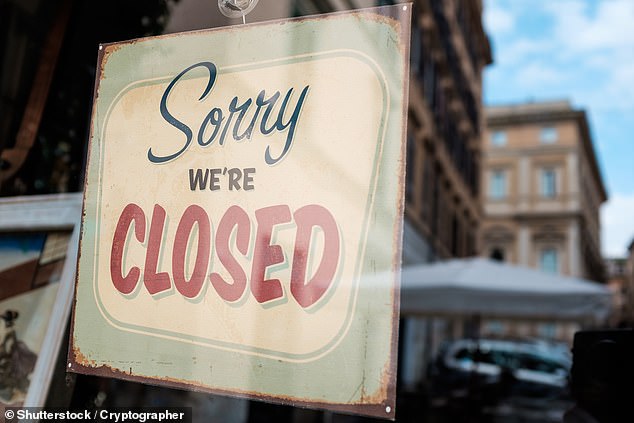 Pubs and restaurants will close under the new lockdown plans, and the Campaign for Real Ale has called for further support to be provided while doors are shut

Michael Kill, chief executive of the Night Time Industries Association, said: ‘The announcement from the Prime Minister today will leave night time economy businesses facing a ‘financial armageddon’. It is the most horrific of Halloweens.

‘It’s frightening to think that given the gravity of the situation, we are still being given limited communication, consultation or time to respond, or plan around these decisions.

‘Their plight is being made even worse by the huge void in financial support for the sector.

‘Many of our businesses have experienced extreme financial hardship, been presented with unmanageable operational measures and have in some cases been forced into complete closure since March.’

The West End employs one in 10 Londoners, and this year’s run up to Christmas is shaping up to deliver ‘some of the most difficult trading periods we’ve ever experienced’, he said.

Mr Tyrrell added: ‘Many jobs have already been lost, and many more are at risk, unless trading levels increase or furlough is reinstated.

‘In addition to emergency support to cover lost wages, the Government must make an immediate announcement that it will maintain essential support measures such as continued business rates relief after April next year.

‘Retailers and the public need to be reassured that there is light at the end of the tunnel, as continued uncertainty and stop-start measures are undermining confidence and worsening an already catastrophic situation.’