Bushfire crisis grips both sides of Australia as homes are lost and residents are warned to flee before it’s too late: ‘Do not expect a firefighter at your door’

Hundreds of residents from rural towns across Australia have been told to prepare for the worst as bushfires spread out-of-control.

Homes have already been destroyed and others remain under threat by blazes near Cedar Vale, Millmerran Woods, Cypress Gardens, Millmerran Downs, Thane and South Ripley as the Queensland of Fire and Rescue Services order more than 300 residents to evacuate.

Properties on the outskirts of Lavington on the border of Victoria and New South Wales are also in danger after a five-kilometre-long freight train caught fire on Tuesday afternoon, sparking grassfires.

On the other side of the country, two emergency level fires are raging across Western Australia’s south-west and Wheatbelt regions as the state’s Department of Fire and Emergency Services urge residents near Bridgetown and Kununoppin to evacuate if safe.

‘Do not wait and see, leaving at the last minute is deadly,’ DFES stated in an alert.

Bushfires are starting to grow out-of-control in areas around Australia as emergency services rush to quell the blazes before they seriously threaten lives and homes (Pictured, WA firefighters tending to flames in the states south-west)

The Lavington blaze is currently being attended to by dozens of fire trucks from local areas as well as aerial support.

Fire and Rescue NSW are urging those in Lavington and nearby Albury to watch and act, saying ‘there is no immediate danger’, but to stay informed with the most recent warnings.

Fires bans in 108 areas in West Australia are being enacted by DFES while the blaze in Bridgetown is currently ‘out of control’.

DFES personnel alongside 12 local firefighters and local farmers are currently fighting fires to the North and East Kununoppin as nearly 40 km/h winds are pushing the blaze towards the town centre.

Rapid aerial support and resources were distributed to rural communities in the days prior in anticipation of dry lightning sparking bushfires across the state. 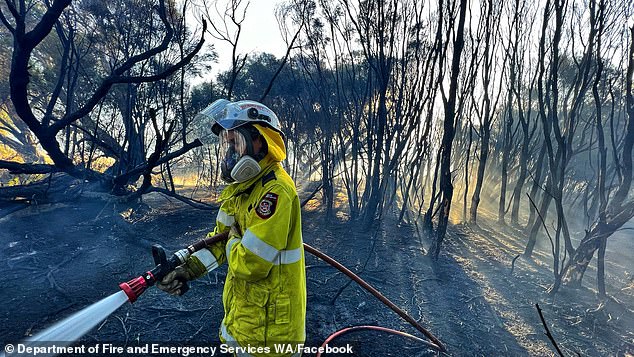 However, Klemm also urged communities to stay informed with current warnings and to stay alert for smoke and fires in their area.

‘We need to the community to do their part,’ Klemm said. 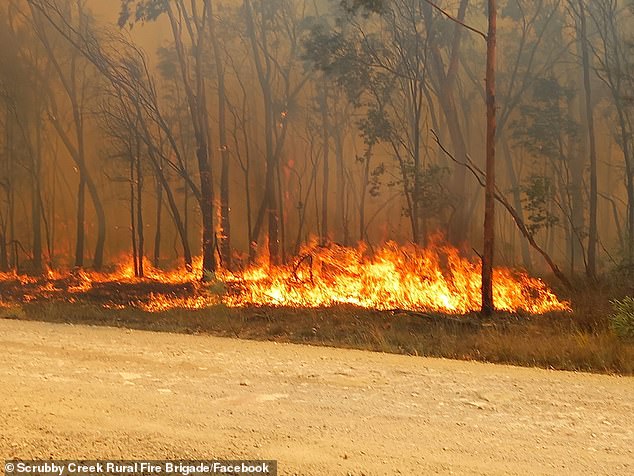 A fire near Bridgetown in WA’s south-west is ‘out-of-control’ while a blaze near Kununoppin, pictured, in the Wheatbelt is being pushed towards the town centre by nearly 40 km/h winds

Fires consuming parts of southern Queensland have burnt through hundreds of hectares of bush and farmland, destroying homes and property.

Firefighters in the area struggled to contain the blaze on Monday night as temperatures in the high 30s and low humidity caused some to suffer heat stress.

‘We confirmed two dwellings that have been destroyed and a caravan and a number of smaller outhouses and buildings and some of those properties as well,’ QFRS manager Wayne Waltisbuhl told the ABC. 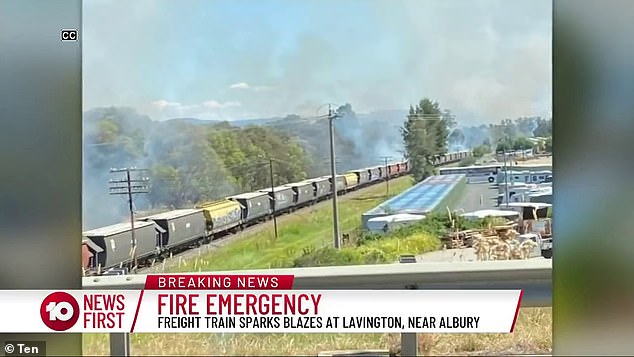 A five-kilometre-long freight train caught alight (pictured) on Tuesday afternoon in Lavington, near Albury on the Victorian and New South Wales border, sparking grass fires and threatening nearby properties

QFRS have reminded residents of nearby areas to be aware of smoke limiting visibility, impacting driving conditions and may cause health impacts for some people.

‘Conditions could get worse quickly,’ Queensland firefighters said in a warning on Tuesday.

‘Firefighters are working to extinguish the fire, however you should not expect a firefighter at your door.’

No one has been hurt by the Queensland flames with the states Deputy Premier Steven Miles thankful for the work of emergency services.

‘It just reminds us again how well served our state is by our first responders, working through the night to keep those properties safe,’ he said.

An evacuation centre has opened at the Millmerran showgrounds for people who need to flee their homes.