Parallel parking masterclass! Bus driver shows off his skills as he backs a people-carrier into a VERY tight space overhanging a ditch in India

This driver in India took the perils of parallel parking to new heights after expertly maneuvering a people-carrier in between two sheer drops.

PJ Biju, a bus driver from Kerala, India, had collected a friend’s white Toyota Innova ahead of planned works on the car’s paint and was attempting to park it near his house when his wife recorded his astonishing parallel park.

In the video shared on Twitter on Sunday, PJ is seen driving up to a parking space, behind two metal railings, with sheer drops either side of the concrete spot.

The manoeuvre would have been a challenge for even the most experienced of drivers, but PJ, who is used to driving buses that are 12.5m long, made it look easy.

In the footage, the people-carrier pulls up alongside the less-than-inviting space and casually reverses back into it – leaving the rear wheels of the vehicle only inches from the sheer drop.

After only a couple of minor adjustments, PJ successfully parks the people-carrier and gets out to inspect his work.

Speaking to Manorama News PJ said: ‘I have been driving buses, especially on the Ernakulam – Kannur route for many years. And those vehicles are 12 and a half metres long. 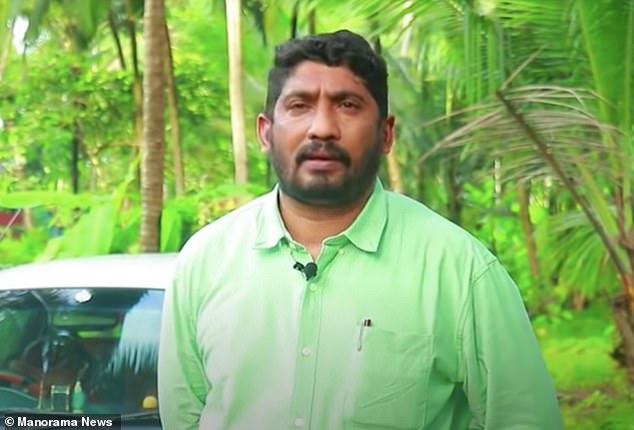 PJ (pictured) works as a bus driver and is used to parking vehicles that are 12.5m long and said because of this, parking other smaller motors isn’t a problem

‘So the Innova’s length has never been much of a problem for me. Be it any car, you have a mental picture of the size of the vehicle. It’s all about that understanding and confidence.’

A second video posted on social media showed PJ get back into the vehicle and expertly manoeuvre out of the space again.

Collectively, the two videos have received over 50,000 likes on Twitter since being posted.

PJ said he had been unaware that his wife had even recorded his parking attempt and only found out when people started leaving likes on the video.

When asked about the response his parking technique has received on social media, PJ said: ‘I am just awestruck by this. I had no clue this would happen.’ 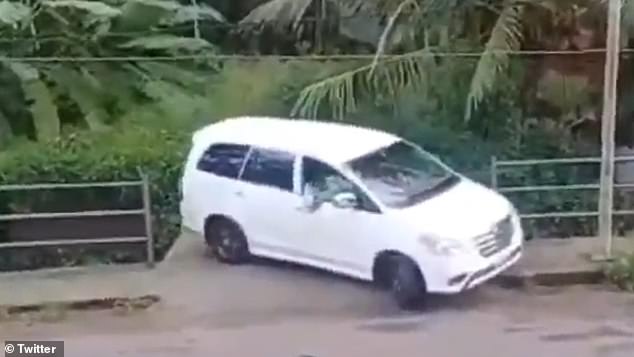 PJ smoothly reverses the people-carrier backwards into the space until the rear wheels are only inches from the drop, before making a couple of minor adjustments to complete his parallel park